Trending 17th May 2019 by Victoria Stokes

15 Ways Your Relationship Changes When You Move In Together

The good and bad of shacking up.

You’ll get good at doing your own thing together

You want to read your book while your other half wants to catch up on the bants in his WhatsApp group. Living together means you both get to do your own thing, but now you get to do it while cuddling.

Date night will take on a special meaning

It’s your one night a week to get out of your comfys and really forget about all the household stuff like rent, bills and that blocked toilet that still hasn’t been fixed, and just enjoy each other’s company. You’ll develop your own traditions too. Like pizza and pints down the local of a Friday, or dinner and a movie on Tuesdays.

You literally do everything together which includes but is not limited to: picking your other half ‘s grey hairs while they’re on the loo, examining that weird bump on their body and cleaning up after them when they’re sick. Some say it’s not romantic, but we reckon it definitely is. Just not the sickly rom com version.

Just like the four walls of your house keep you safe, your other half is who you run to when you need comfort. They’re always there at the end of a long day and there’s not much that a cuddle on the couch with them can’t fix. Home really is where the heart is.

Those endearing quirks of theirs are starting to verge on annoying and how have you never noticed that they breathe so loudly when they chew?! If you’re lucky, you’ll learn to tolerate their irritating habits (look, we all have them) instead of throwing them and their stuff out the front door in a fit of rage.

You know when they have to go number 2

It’s not romantic, nor is it sexy, but shacking up with your significant other means knowing what they need to use the bathroom for both by the time and duration of the visit. And on that note, if you’re a really close couple, you might spend more time than expected discussing your bowel movements. Charming. Bartering is the new language you converse in

Living together means constant trade-offs. “If you do the dishes, I’ll make the dinner.” “I’ll make you a cuppa now, but you have to make me one later.” Consider cohabiting as the literal definition of You Scratch My Back, I’ll Scratch Yours.

The term ‘other half ‘ really comes into its own when you live together because you’re always together and it feels fantastic. You do pretty much everything as a team so when one of you has to go away for a night or two it feels kinda like losing a limb. Sure it’s nice to have a cosy night in by yourself, complete with a face mask and a bottle of wine, but you’ll still be super relieved when they come back.

In fact, food might become the main thing you talk about, if it isn’t already. “What’ll we have for dinner tonight babe?” “Did you pick up milk from the shop?” “But I cooked last night!” “What do you mean you don’t like salmon? You ate it last week?!” “No we can’t have pizza for dinner three nights in a row.” You’ll develop little rituals too, like bacon sandwiches on a Sunday morning or takeaway and beers on a Friday night. 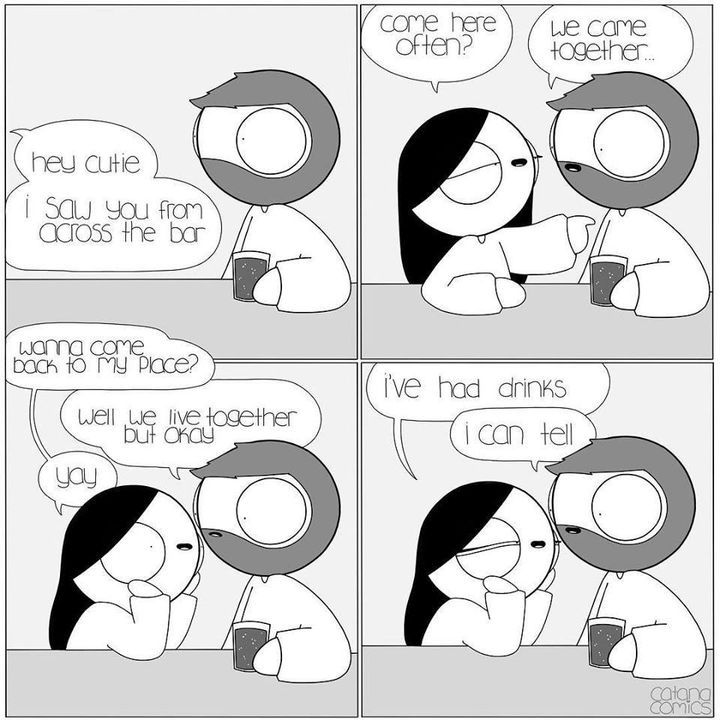 Don’t want your other half to know that you get your upper lip waxed or that you’re actually a bit of a slob? Too bad. You have no secrets now.

You might argue a little more than you used to

They hate the fact you set six alarms in the morning and wake them up. You can’t abide them leaving their clothes on the floor. Arguments are pretty much par for the course when you live together. Fortunately, most disagreements can be resolved with a cuddle and an offer to do the dishes.

Be prepared for your hair removal habits to change

If you’re the type who likes to always be silky smooth for your other half, you’re either going to have to get very strategic about your hair removal habits or cut your losses and admit defeat when it comes to being permanently fuzz free. If your SO is in any way a decent human being they won’t mind.

Maybe it used to be that you’d send each other risqué texts while at work, describing in explicit detail what you’re going to do together the next time you meet up. Now your texts are more few and far between because you’re nearly always together and they read more like messages you send your siblings than your other half. “Did you remember to pick up bread on your way past the shop?” “We’re out of loo roll!” “Did you eat the yogurt in the fridge I was saving?” Sexy.

Surprising each other is near impossible

Hiding gifts when you share storage space and attempting to cook your other half a surprise candlelit dinner when they’re scrolling on their phone in the other room is no mean feat. Besides, you’re so acquainted with each other’s routines that anything out of the ordinary is immediately suspect.

You’ll love them even more than you did before

All being well, you’ll love this person even more than you thought was possible before you had your keys cut. They’re no longer just your partner, they’re your roommate, the person you eat, sleep, and get intimate with, and the one you wake up to every morning. Living together feels like having a permanent sleepover with your best friend, and you wouldn’t have it any other way.