Here It Is: A Timeline Of Harry Styles’ Entire Dating History

From 2010 right up until today 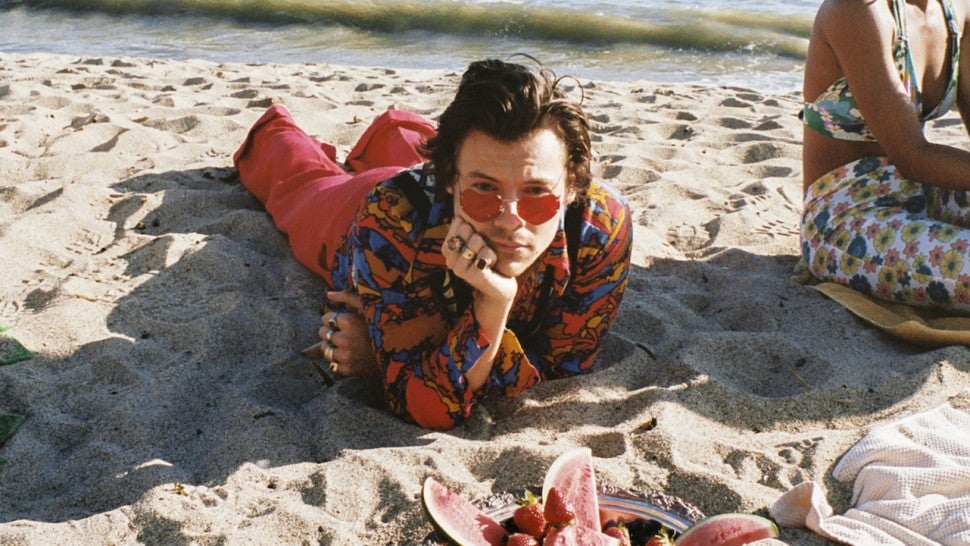 Harry Styles seems to reguarly make headlines for his dating life. Earlier this year he was dating actress and director, Olivia Wilde, until their split was announced in November 2022.

The news got us thinking to what a colourful dating history Mr. Styles has.

Now, we should preface this by stating that in no way are we alluding to Mr. Styles being a womaniser, the opposite in fact. Parallels must be drawn between a man comfortable enough in his masculinity to don dresses and advocate for treating people with kindness, and his ability to pull supermodels. Who knew that being a good person would get you laid, huh?!

So here it is, the exhaustive list of Harry Styles’ full dating history.

When we said exhaustive, we weren’t messing. Harry was catapulted into fame during his time on X-Factor, drawing in all the ladies with those dimples. Harry set our 15-year-old heart’s racing with jealousy on Xtra Factor, when he was seen enjoying a ‘date’ with fellow contestant Katie Smith. Was it entirely set up for entertainment purposes? Yes. Are we still mad it wasn’t us? Also yes.

Harry’s first relationship in the spotlight. Harry and Caroline met while she was a presenter on the X-Factor. Causing quite a stir at the time due to their 14 year age gap, the two soon parted ways after a rumoured few months of dating. Some days after Caroline’s tragic passing in 2020, Harry attended the BRIT awards wearing a black ribbon to pay his respects.

One that people may be less familiar with, Harry and British actress Emily Atack had a bit of a thing back in 2012, one that Emily has since dubbed as ‘a bit of fun’.

“We had a short-lived thing that was just a bit of fun. Then we went off in our opposite direction” Emily told Reveal Magazine in 2014. In 2012 Harry was also linked to Made In Chelsea star Caggie Dunlop and American model Emma Ostilly.

One we’re still not quite over yet. Aligning pop-star forces, Harry and Tayor dated for the guts of a year, when he was 18, with them being papped on quite a few outings together.

After their break up it’s rumoured that they wrote songs about one another some years later, with Taylor’s ‘Ready For It’ about Harry, and Harry’s ‘Two Ghosts’ about Taylor, apparently. Soon after their parting Harry was rumoured to have had a short-lived fling with Pussycat Dolls Star Nicole Scherzinger, with him being 19 and she 35.

Now entering the supermodel era. It was only a matter of time before members of One Direction, the world’s biggest boyband at the time, got involved with some of the world’s most known faces. For Harry, that was 1/5 of the Kar-Jenner gals Kendall Jenner. Being linked first in 2013, the two apparently enjoyed a short romance before calling it a day.

But, it’s said that two just couldn’t get enough of one another and rekindled their romance again in 2015 for another year. The two then parted ways for good in 2016 and have since remained friends – as you can see from their recent appearance on  The Late Late Show.

Daughter of David Foster, Erin Foster is an actress and producer who reportedly dated Harry for a short period in 2014. It’s believed they met through a mutual friend

Moving on to Australian supermodel Nadine Leopold, Harry and Nadine apparently enjoyed multiple dates together but their romance soon fizzled out as they both quickly moved on.

Another VS model, Sara and Harry soon met after he parted ways with Nadine, and they enjoyed each other’s company for a brief period in time.

Squeezing quite a few supermodels into the one year, we can only assume Harry signed up to some Victoria Secret dating app – because where is he getting all these chiseled young-wans from!? Harry ended 2015 with a bang by hooking up with yet another supermodel, Georgia Fowler.

But how do we know for sure that they dated? Well, Georgia made things known by posting a video of the two playing scrabble together (we would too, tbf).

Taking a break from the supermodels, Harry and food blogger Tess Ward secretly dated for quite a while. Things reportedly ended because Tess still had feelings for an ex, ending things with Harry in order to pursue things with said ex.

Whether or not that ex is the man that she is currently expecting a baby with is unknown, but still, alls well that ends well, ya know.

Meeting through a mutual friend, Harry and French/American supermodel Camille Rowe dated for a full year before breaking up. It’s reported that Harry was heartbroken following the split, with it being assumed that Camille is the inspiration behind many of the songs on his latest album, Fine Line.

Another very brief romance, Harry was recently linked to Japanese/American supermodel Kiko Mizuhara, who you may recognise from Queer Eye’s Japan series. And what’s more, the fab five’s Bobby Berk even let us in on how Harry and Kiko met one another, and how all 7 of them enjoyed a karaoke night in Japan. Speaking with Grazia he said:

“And he was in Japan, and her and I were hanging out at a friend’s house. And he messages “Hey, what are you guys doing?” And she was like “Hey, we’re just chilling at a friend’s house, like come over”, and then Harry came over and we went out for karaoke.”

Harry’s latest girlfriend, Olivia Wilde parted ways from the singer in late 2022. It was reported in November that the two are ‘on a break’, after a source shared that the split was very ‘amicable’. “He is still touring and now going abroad. She is focusing on her kids and her work in LA” the source said.