American musician Machine Gun Kelly, and actress Megan Fox arrived in Dublin over the weekend. Wasting no time getting their Irish adventure started, the Hollywood couple headed to Nine Crows in Temple Bar, looking for some vintage finds.

Not only did they purchase some new clothes at the shop, but according to manager Alexandrea Morgan, the pair were incredibly kind and even gave the staff free tickets to MGK’s concert in the 3Arena last night.

Sharing all about the A-list couple’s visit to the Dublin retailers, Alexandrea explained in a TikTok, saying: “Storytime about how Megan Fox and Machine Gun Kelly, ended up in Nine Crows Temple Bar. 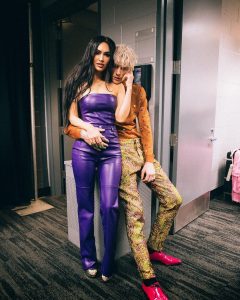 Alexandrea explained how she nearly missed the duo, but was called in to help get an item for MGK.

She said: “10 minutes before closing last night, I was over in our other shop and one of the girls on shift in Temple Bar rang me, and was like, ‘Megan Fox and Machine Gun Kelly is in the shop!’

“I literally took off like Sonia Sullivan down to Temple bar, like I couldn’t get there quick enough.

“He wanted like a band t-shirt that was on our mannequin and the girls didn’t know how to dismantle the mannequin. That’s my job so, I had to do that.

“It was just, oh my god, I literally walked in and the first thing I said was: ‘What the f*ck are you doing here?’ Couldn’t believe it.”

After the pair had finished shopping and were about to leave, Alexandrea asked for a photo, with Megan having a very sweet response.

As she explained: “She bought her coat, he bought the tee, and I was like: ‘can I please get a photo of the two of you? For our memory and for socials and stuff like that, just to show that you were here like we’re so surprised.’

“I’m obsessed with her, and the big furry bucket hat! Like genuinely she looked like a Crumlin hun, I was living for it.”

She also shared with The Sunday World, how the hit musician then invited the staff to his gig, saying: “They were delighted with their bits, and he gave us all tickets for his concert. He was so nice. They were both lovely. They were just so, so nice.”

Also sharing how down to earth the stars were, she said: “When I got there, there were still customers in the shop. They didn’t ask anyone to leave or anything.

“They were so normal, but they did have like four of their crew with them, their security were all dressed in black.”

They also paid full price for their items, never asking for a discount.