The 25-year-old is trending online and we're not surprised!

With over 2.5 million followers on Instagram, you many already know her and if so you’re probably a fan. But while she is wildly popular, it’s just as easy to know her name, but have never actually seen her content.

Chances are, if you’re on TikTok or Pinterest you’ve heard the name Matilda Djerf, but you might not actually know who she is. The hashtag #matildadjerf has 130.3 million views, while Matilda only has around 997k followers on the app -which of course, is still loads but shows that if you’re hearing her name on your FYP, it’s probably not one of her videos.

So who is Matilda Djerf?

Well aside from being an icon, a legend, and the moment, she is an influencer from Sweden.

The 25-year-old might be having her moment on TikTok right now, but she found plenty of success before then. Starting a YouTube channel five years ago, posting behind the scenes from her work as a model and also travel content.

Since then her career went from strength to strength, as she branched out to other platforms like Instagram. She also started creating more fashion, beauty, and lifestyle content, which earned her a massive fan base.

In fact, her fashion content was so beloved that she started her own fashion brand.

Djerf Avenue began in 2019, described as, “a Swedish, non-seasonal, ready-to-wear brand. It’s created for you, by us.”

They sell a whole range of clothing from dresses, jackets, skirts, trousers, socks, and swimwear. All, of course, in Matilda’s signature styles.

While the brand only began three years ago, it was a dream of Matilda’s for a lot longer. As she has said: “Djerf Avenue has always been something I’ve wanted to build. It’s been a dream since I was a little girl.”

Joining the app in January 2021, Matilda has earned an impressive 997k followers with 333k following her in the last four months alone. She’s the it girl of TikTok, but why exactly did she go viral?

Well, for her hair… obviously.

You can find countless videos dedicated to her fluffy seventies inspired style, with people trying to DIY the look at home, or simply gushing over their love for her locks.

Matilda is credited with popularising the 70’s Farrah Faucet hairstyle with today’s audience.

It’s her signature, as she’s rarely seen not rocking some fluffy hair, and she’s well aware of how iconic her locks are. Telling Allure:

“Hair is such a fun thing. I played around with it a lot and I feel like I finally found a style that I feel at home in. So, I’m not tired of it. I’m just happy that my hair can inspire people, even though it’s weird because it’s just my hair.”

Hair is extremely important to her, as she has to drive four hours to her hairdresser Amalia Berglund, who she’s had since she was 18 years old. Now that’s dedication!

Unfortunately Matilda hasn’t done a dedicated tutorial on the style yet but she has popped online snippets of how she achieves her voluminous curls.

In a YouTube video, she brief shows how she styles her hair, using the Dyson Airwrap on just the ends of her hair, and presumably using the same tool to style her curtain fringe. Watch that here! 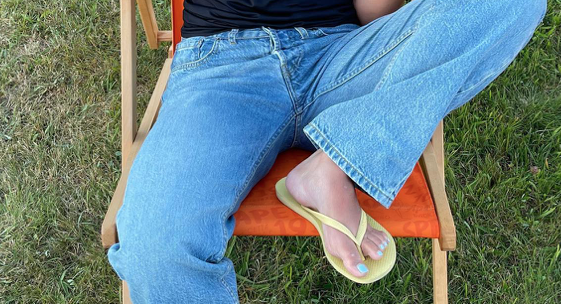 Are You Ready For The Flip Flop Renaissance?