We Tried The Hair Dryer That ‘Broke The Internet’, And Here’s What We Think

The Revlon One Step has hundreds of five-star reviews on Amazon.

Blowdrying my hair has always been a chore to me. If I’m not sweating buckets, I’ve got hand cramps, and I always find myself giving up halfway through and ending up with a head full of bumpy, frizzy hair that looks, not to put too fine a point on it, shite. I will try anything (anything) that claims to make the process easier.

The €65 Revlon One Step Hair Dryer and Volumiser has been praised in Facebook groups and Reddit threads all over, with many people claiming it not only cut their drying time in half, but left them with a professional-looking blowdry.

It’s a bestseller on Amazon, where the reviews speak of it almost reverently:

Holy cow!… I’m in awe!! My now bouncy, styled, smooth, shiny hair IN ABOUT HALF THE Time looks fab!!! It’s unbelievable, I’m going out of my house without having used straighteners, never thought I’d see the day!

The tool has even been compared to the €499 Dyson Airwrap, which has a similar hair drying brush attachment. And at a mere fraction of the price, is it any wonder people are going mad for it? 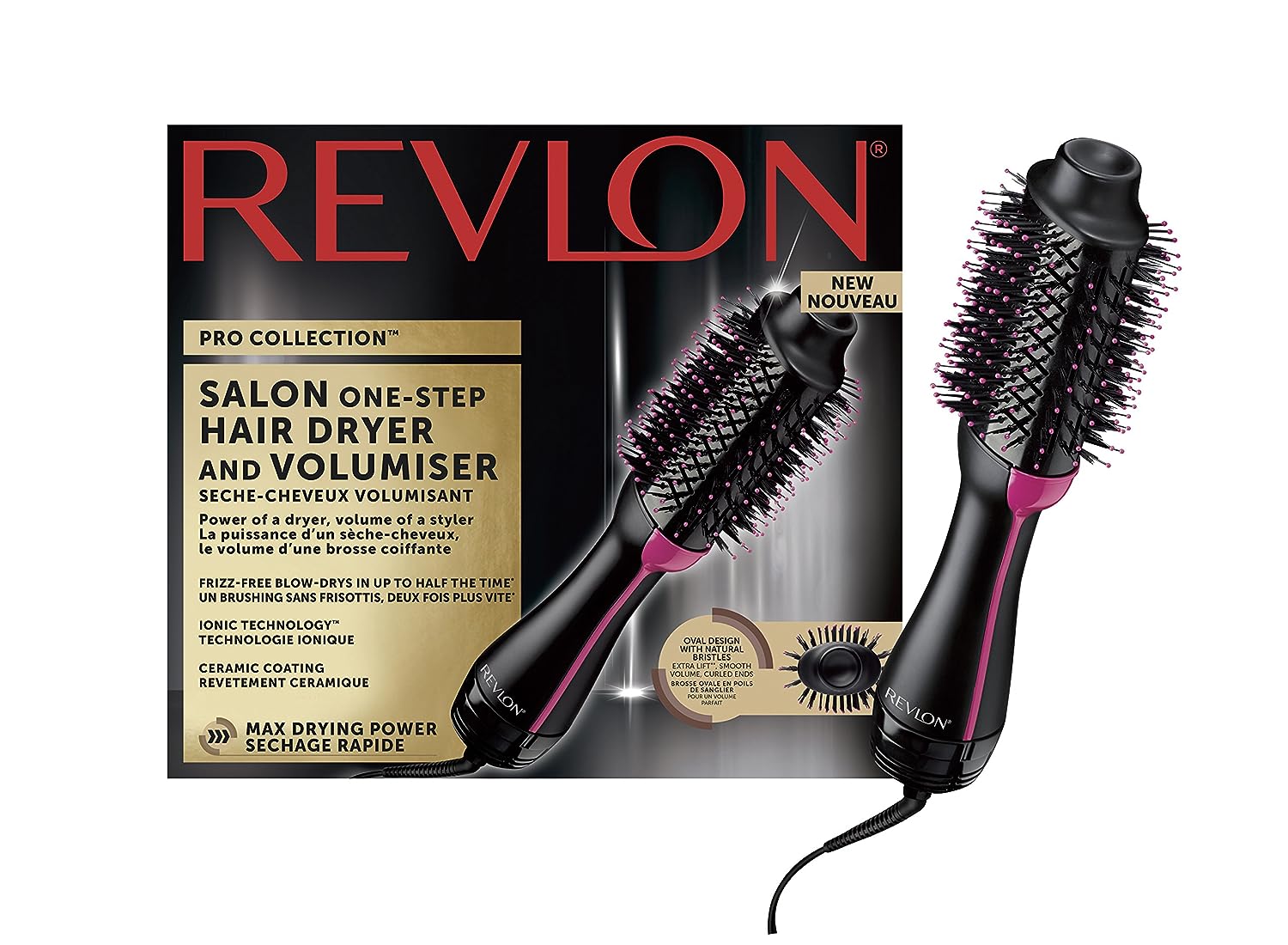 As a person with mid-length, unreasonably thick hair (I got an undercut, but still have enough left over to make several wigs), blowdrying is a physically difficult and mentally draining task. Dramatic, but it’s true. I usually just allow my hair to air dry, and the lion’s mane I end up with isn’t the worst – but it would be nice to be able to style it properly when the need arises.

So when I saw the internet freaking out about the One Step, I spent weeks trying to track one down online and in my local Boots. WEEKS. It could not be kept in stock. Eventually, I nabbed one on Amazon (it’s about a tenner cheaper there than it is in Boots), ready for my life to be changed for good. So, was it?

Well, as with most of these hair tools, it’s not going to transform your hair in any major way. You’ll still have the same kind of hair you had before you bought the hair dryer (which in my case is thick, kinda frizzy, and neither curly nor straight). The brush is intimidatingly large at first glance, and while that’s fine for my collarbone-length hair, people with shorter styles might find it a bit too bulky.

Are you sick of seeing this hairdryer yet? ?‍♀️ If you haven’t heard, this one step hairdryer-brush styler by @revlon @revlonhairtools went viral, thanks to @irenesarah ! This video is for all my straight hair girls!⁣ ⁣ ⁣⁣ ⁣ ⁣⁣⁣ ⁣ ⁣⁣⁣ ⁣⁣⁣ ⁣⁣⁣ ⚠️Please Read ⚠️⁣⁣⁣⁣⁣ • My hair is super straight, so it was 80% dry (just like when I blow dry it)⁣⁣⁣⁣ If you have curly/wavy hair, it definitely needs to be damp. ⁣ •The first time I used it, I HATED it. It made my hair soooo FLAT. This time I used the low heat setting which gave me my volume back. Also the high was way too hot for me!⁣⁣⁣⁣⁣ ⁣•It did cut my blow drying time in half! Way faster than a blowdryer plus round brush!⁣⁣⁣⁣ ⁣⁣ ⁣ #revlon #revlonhairdryer #revlonhairtools #revlononestephairdryerandstyler #revlononestephairdryerandvolumizer #1minutemakeupvideo #wakeupandmakeup #hudabeauty #hairtutorials #hairvideo #hairblowout

Revlon advise you to begin with slightly air-dried hair and then, working in sections, slowly run the brush through a chunk of hair from underneath. The tip stays cool, meaning you can easily keep the tension for styling, and it takes only a few passes of the brush for my hair to be completely dry.

Did it cut my styling time? Not really, but given how thick my hair is nothing short of a miracle could do that. However, the end result looks smoother and more sleek than it ever did when I was trying to wield a brush and a hairdryer at the same time, and it feels so soft and silky. I actually prefer the look to the standard blowdry I’d get in a salon – I always end up resembling a middle-aged mam on the way to a wedding, so the bouncy, swooshy hair this gives me is a nice change.

I find it very easy to dry the back of my head (which I used to just openly avoid) with the One Step, and there are no lumps and bumps left to go over afterwards with a straightener. The brush is also really easy to clean, which is weirdly important to me as someone who is slightly hair-phobic! (If you don’t pull the loose hairs out of your hairbrush regularly, I’m… scared of you.)

If you really cannot stand drying your hair, the One Step probably isn’t going to change your mind about the process. But if you have trouble holding a brush and a heavy hairdryer (people with chronic illnesses are some of this tool’s biggest fans) or are otherwise inept at styling your hair, it’s a great buy.