The protests are a response to a teenage rape victim's thong used as evidence against her in court. 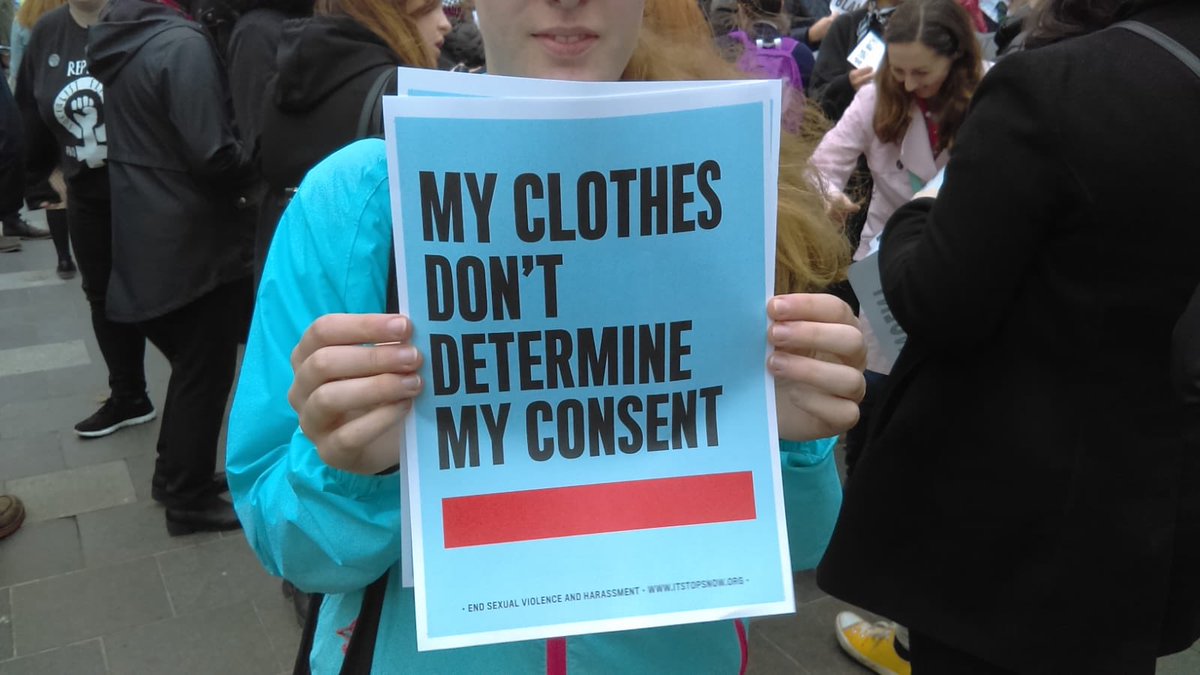 Hundreds of people gathered across the country this lunchtime to protest victim blaming in Irish rape trials.

The protests are a response to a recent trial in Cork in which a 27-year-old man was acquitted of raping a 17-year-old girl – the teenager’s thong was used as evidence, and the defence barrister asked the jurors to consider her underwear as they made their decision.

“You have to look at the way she was dressed. She was wearing a thong with a lace front,” barrister Elizabeth O’Carroll told the court.

The idea that the victim’s underwear implied consent was met with widespread backlash on social media, where women have been posting photos of their underwear with the hashtag #ThisIsNotConsent.

Counsel for man acquitted of rape suggested jurors should reflect on underwear worn by the 17yo complainant. Following this wholly unacceptable comment, we are calling on our followers to post a picture of their thongs/knickers to support her with the hashtag #ThisIsNotConsent pic.twitter.com/ZkVU0GVAIN

Speaking about the trial in the Dáil on Tuesday, TD Ruth Coppinger held up a lace thong and asked why nothing was being done to stop the use of ‘rape myths’ in Irish courts.

Taoiseach Leo Varadkar replied saying he could not comment on individual cases, but believed any defence which called into question a rape victim’s clothing was “absolutely reprehensible”.

I hear cameras cut away from me when I displayed this underwear in #Dáil. In courts victims can have their underwear passed around as evidence and it's within the rules, hence need to display in Dáil. Join protests tomorrow. In Dublin it's at Spire, 1pm.#dubw #ThisIsNotConsent pic.twitter.com/DvtaJL61qR

Protests were organised in Galway, Limerick, Dublin and Cork today, with hundreds of people gathering to speak out against the language used in courts against victims of sexual violence and rape.

Protesters in Cork left underwear on the steps of the courthouse in which the trial took place:

Protesters place underwear on the steps of the courthouse in #Cork city during #thisisnotconsent protest pic.twitter.com/pY4Dk9dIc8

Hundreds march through #Cork city to the courthouse where a 17-year old’s underwear was used by the defence barrister when addressing the jury in a rape trial #thisisnotconsent pic.twitter.com/4yqGcW6XPG

NWCI and @ItStopsNow_EU are at the rally in Dublin in protest of language used in courts against victims of sexual violence and rape. Today, and every day, we express our solidarity with survivors. #ThisIsNotConsent #itstopsnow pic.twitter.com/xFaaelJf5s

Protest at Dublin's The Spire about the use of a thong as evidence in Cork rape trial. As usual @RuthCoppingerTD speaking so much sense about the government's responsibility to introduce consent classes in school #ThisIsNotConsent pic.twitter.com/56u1V9GFvl

Speaking at the Spire in Dublin, Tara Brown of the National Women’s Council of Ireland said:

Using rape myths, such as the type of clothing a victim was wearing, in order to determine consent shows us that Ireland has a long way to go to achieve a victim-centred prosecution system for violence against women.