Size Does Matter: Wanting A Breast Reduction In A Society That Champions Big Boobs

"I always felt like they defined me - a simple v-neck t-shirt would attract the wrong attention."

I have massive boobs. This is not a brag, far from it, but people always seem to take it that way when I point out the obvious. I’m not pointing out my huge chest to be conceited though – I’m normally trying to make a joke about it because it makes me feel so insecure. When dresses won’t fasten over them, or a t-shirt looks indecent, or they wobble on a dancefloor or in the gym, I often want the ground to swallow me up.

When I was little, I’d read Judy Blume books in which the heroines were always trying to increase their bust, and thought that big boobs was the ideal. And of course, pop culture and society did little to dissuade me, with Page 3 and lads’ mags rife when I was growing up. In my early twenties, I’d a nice rack. Not too big, not too small, they were just right and I frequently went braless because my age and gravity were on my side. Now though, it’s a different story.

They’ve just never stopped growing, and now they are heavy, painful, humiliating and pretty much the bane of my physical life. I am a woman in possession of what I thought was a 34FF chest (more on that later) so I have to buy my bras in the special fuller bust section – the average bra size in Ireland these days is a D. I require huge cups and thick straps, but even they can’t contain my bountiful bosom. At the end of the day, my shoulders are marked with angry red sores from said straps. Underneath my bust, I’ve developed a horrible scaly rash from my bra chafing and rubbing. I have back pain, particularly in the middle, and my boobs hurt quite a bit. They have stretch marks, they’ve drooped big time, and I can’t even blame children or breastfeeding. 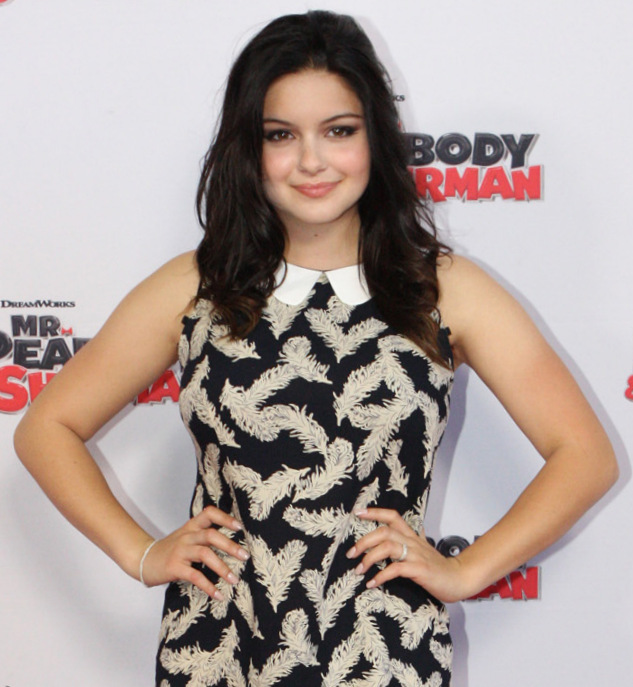 Modern Family’s Ariel Winter had a breast reduction at 17, saying the media’s obsession with her boobs made her ‘uncomfortable’.

Whenever I catch myself giving out about my boobs, I think of all the women who have lost one or more to breast cancer, and would love a healthy pair. However, I still can’t feel grateful. I’ve tried training my boobs away, losing weight, worn about twenty different size permutations in an attempt to hit on one that’s slightly comfortable, but it’s now come to the point where I’m seriously considering breast reduction surgery.

So I asked around. A few friends knew people who’d had it done and said it was the best thing they ever did for themselves. A couple knew of women who’d had breast reduction surgery and they’d “grown back” – the horror! However knowing these could all be urban myths, I wanted to talk to someone one on one who’d actually been there, done that. So I got in touch with Laura, 34. She was 29 when she had hers reduced.

By the time I was 19, my boobs had reached novelty size. They were causing emotional problems in the sense that I always felt like they defined me – there was no hiding them and a simple v-neck tshirt would attract the wrong attention. I didn’t get offended… I understood why people would look. Physically, my lower back would hurt and my neck and shoulders from carrying them. I didn’t start sleeping on my front until recently!

I wonder if she was nervous about the surgery because it is a big job and requires general anaesthetic. “Not at all! I had wanted it for so long at that point, and luckily my clinic in Ireland was so supportive. I like to think I’m quite an open person so talking about the surgery with my friends and family beforehand helped diminish any fears.

Afterwards I felt like a weight had been lifted off my chest… literally! I went from a full 34E/F to a 34C. It was essentially 50% of my breast removed.”

One thing I’d heard a lot is that breast reduction isn’t really painful – minimal compared to liposuction and rhinoplasty and that the down time was relatively short.

“It wasn’t very painful, but I was short of breath and couldn’t lift my arms very high for a few days. I could still manage to get dressed and brush my hair. I was sent home with medication, a compression bra and two drains (one for each breast) that collected excess fluid and reduced swelling. I had these in for about three days until my surgeon was happy that the drainage had subsided. All the stitches are dissolvable apart from the ones that held the drain in place. For a short time afterwards, I felt very, very tender every time I removed my compression bra or in the shower.”

Laura says she can’t express how the surgery has bene ted her life.

I can move more easily, running was out of the question previously. I can dress how I want to dress. I’m 5 3 and in good shape, so it’s nice to be able to wear nice things! And I no longer have lower back pain or large indents in my shoulders.

After talking to Laura, I decided to find out more for myself, so I booked a free consultation at River Medical in Dublin. In all honesty, I was terrified going in. It was a hot day and I was running around, and it only occurred to me when I got there that I’d likely have to get my sweaty boobs out. The nurse Aishling put me at ease, and then I was in to see Dr Chaztis.

He very matter-of-factly talked me through how a breast reduction works (they remove non-vascular tissue from the under side and reposition the nipple higher), the potential risks (everything from tissue death to scarring and loss of nipple sensation) and what can be expected. I asked him about the scary growing back rumours, and he said it is possible if someone gained a lot of weight, but that the breast will have been repositioned higher, so they would never be the same as before. He said they never guarantee a patient will be a particular size after, as it all depends on the person and their breasts.

He then examined me. He told me I am much bigger than an FF, and wouldn’t accept that I’m a 34 – he wrote 36 on my form. He then drew on my boob with a biro, showing me where my nipple should be in relation to my collarbone (seven cms higher than it is, by the way) and where the scars would be. He also told me that if someone wanted to lose a significant amount of weight, do it before breast reduction, as you’d essentially be dealing with a different breast and potentially loose skin or sagging.

It was a lot to take in, so I was glad to go back to Aishling who then talked me through the entire procedure, from pre-op to the anaesthetic to waking up. I felt like my mind was made up there and then, until she told me the price – €7950. It’s possible to get it done on your health insurance, but there are lots of rules – you’ve to prove a history of your boobs basically tormenting you, with doctors visits, painkillers and a pretty low BMI of 20 to qualify.

Now that I have all the facts, I think it’s a case of when, not if I’ll have the surgery. I’m slowly but surely getting fitter, but my boobs show no signs of shrinking – if anything, they feel bigger. So I’ve started a savings fund, and will see where it takes me. I’m going to make this part of my three year plan, unless something drastic happens in the meantime. Wish me luck!