A post shared by 👑My Queen Is Ariana Grande👑 (@arianagrande777_og)

During a 2017 concert of Ari’s in the city, a terrorist attack took 23 live and left many injured, but since then Ariana has always showed her support for the city, hosting a fund raising concert there just a month after the attack and donating to many local charities.

But her support doesn’t stop there, as Royal Manchester Children’s Hospital has just shared the singer’s incredibly sweet Christmas surprise for patients.

With Ari donating a massive pile of presents and sweets to be giving to the children during this year’s festivities. 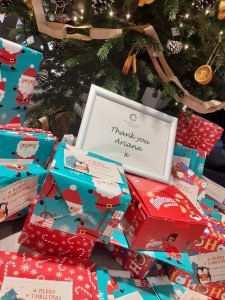 Thanking Ariana for her kind gesture on Twitter, RMCH wrote: “Thank you Ariana!”

Explaining a bit more about the gifts, their social media account shared how the gifts weren’t just for RMCH but several local hospitals as well.

Ari’s Christmas donation is an annual gesture since the attacks.

In 2021, the singer gave 1,000 presents to kids in Manchester who spent time in hospital over Christmas, with each child receiving two presents.

While in 2020, Ariana donated a £100 Amazon voucher to every child at Royal Manchester’s Children’s Hospital and Manchester Royal Infirmary.

How sweet of her!