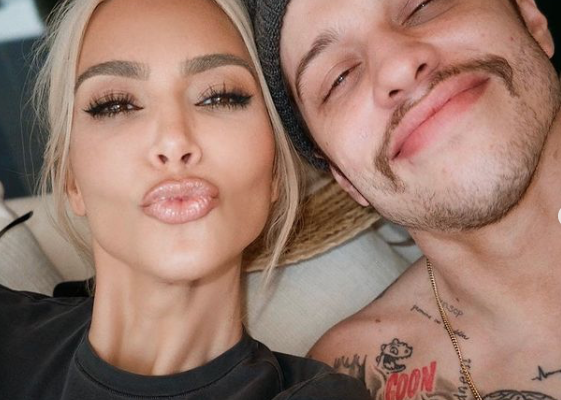 Pete Davidson has removed all evidence him and Kim Kardashian were ever an item.

The couple struck up a connection during an SNL hosting gig and began dating a short time after in October 2021 – they even spent Christmas together at the Kardashian-Jenner home in matching pajamas.

The SNL star showed his love by adding four new pieces of body art to his already extravagant 70 tattoos.

US Weekly reported this included three pieces of chest art including “Aladdin and Jasmine”, from their SNL skit, the name “Kim”  and “my girl is a lawyer” as well as a neck tattoo with the letters KNSCP a tribute to Kim and her four kids with ex-husband Kanye West – North, Saint, Chicago and Psalm.

They called it quits in August 2022 after 9 months of dating. Pete was subsequently spotted hanging out with Emily Ratajkowski soon after which spiked romance rumours between the duo.

The comedian was pictured back in October with a bandage over his collarbone and speculation began that he’d received laser treatment to remove one of his Kim K tribute tattoos.

Pete has recently sparked new romance rumours with his Bodies, Bodies, Bodies co-star Chase Sui Wonders after spending some time together in New York City earlier this month. This comes after his short lived fling with Emily ended in the friend zone.

The pair were spotted on a romantic trip away to the beautiful Hawaiian islands where they were spotted in the ocean with the tattoos noticeably absent.

Many fans were concerned for the comedian after the split with one fan tweeting “Pete Davidson’s tattoo removal guy just put another down payment on a boat”.