Everything We Know About Sex Education Series Four: New Stars, Storylines, And When We Can Expect It To Land

Sex Education is back baby…er well it isn’t exactly back yet but it will be soon!

And it’s good news as, despite a lot of speculation that many cast members were leaving, most of the stars are actually returning. With Asa Butterfield, Gillian Anderson, Ncuti Gatwa, Aimee-Lou Wood, Emma Mackey, Connor Swindells, Kedar Williams-Stirling, and Mimi Keene all reprising their roles.

However not everyone will be back Simone Ashley has left, after joining the cast of Bridgerton as Kate Sharma.

But while Simone’s exit has us in mourning, there are some exciting new stars joining the series including Irish actor Thaddea Graham.

Thaddea, who was raised in Belfast, will be joining as a mysterious character for the new season of the show.

Fans will recognise her from her work on shows like Curfew, The Letter for the King The Irregulars, Us, and Doctor Who.

But Thaddea isn’t the only exciting new cast member as Dan Levy has also taken a role in Sex Education.

That’s right, David or Dayved as Moira Rose would call him, from Schitt’s Creek. He will be playing Thomas Molloy, a famous author and Maeve’s US course tutor at her Ivy League college. 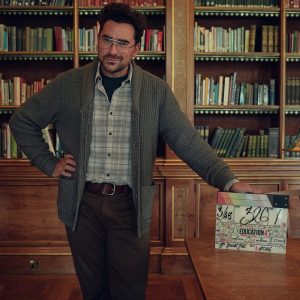 So what can we expect plot wise? Well it seems season four will pick up where things left off with Maeve over in the US and the rest of the gang adjusting to a new school.

With the synopsis reading: “Following the closure of Moordale Secondary, Otis and Eric now face a new frontier – their first day at Cavendish Sixth Form College. Otis is nervous about setting up his new clinic, whilst Eric is praying they won’t be losers again. But Cavendish is a culture shock for all the Moordale students – they thought they were progressive but this new college is another level.”

“There’s daily yoga in the communal garden, a strong sustainability vibe and a group of kids who are popular for being… kind?! Viv is totally thrown by the college’s student-led, non-competitive approach, while Jackson is still struggling to get over Cal. Aimee tries something new by taking an Art A Level and Adam grapples with whether mainstream education is for him.”

“Over in the US, Maeve is living her dream at prestigious Wallace University, being taught by cult author Thomas Molloy. Otis is pining after her, whilst adjusting to not being an only child at home, or the only therapist on campus.”

So when can we expect this new season to hit our screens?

Well, the show is currently being filmed in Wales, and work on the project won’t end until 2023, so it seems we’ll be waiting till next year for it’s grand returning.

That long of a wait might sound like torture (because…well it is!) but at least that leaves us with plenty of time for a re-watch