"People were so engaged and, to this day, are still so supportive" 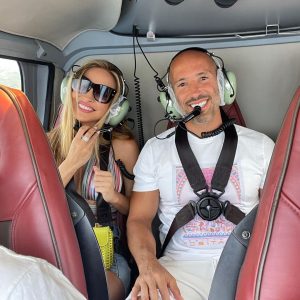 Selling Sunset’s Jason Oppenheim and Chrishell Stause broke up, all the way back in December 2021. But even though it’s been quite a while, Jason still feels guilty over their split.

The reality star opened up while appearing on Netflix’s Tudum, and explained that even though they’ve both moved on, he still struggles with the end of the romance, but not because he regrets it. Confessing he feels bad for fans who were invested in their relationship.

As the realtor explained: “”I appreciate the love and the support, but I [have] a little bit of guilt over letting down the people,”

“People were so engaged and, to this day, are still so supportive”.

But while he is sad for the fans, Jason stressed that he and Chrishell are still incredibly close, as our he and other ex-girlfriend Mary Fitzgerald.

Saying they are the, “closest friends in my life”.

Their romance was definitely popular among fans, but since calling it quits, he and Chrishell have continued working well together, and are both still starring on Selling Sunset.

They have also both moved on, with new relationships.

Jason just made his red carpet debut with new GF, Marie-Lou Nurk, and we mean JUST, like literally this week.

But he and the German model were linked for a bit longer, after meeting while holidaying in Greece at the start of summer.

Meanwhile, Chrishell is seeing Australian rapper G-Flip. The pair made their relationship public in early May after meeting in October 2021, and have been going strong since.