The TV host was seen laughing with the former US president at a football game. 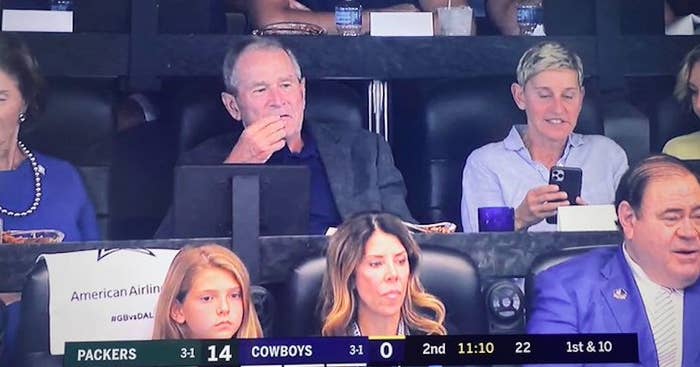 Ellen DeGeneres has been criticised for defending her friendship with former US President George W Bush.

On Sunday, there was some surprise when Ellen and her wife Portia de Rossi were seen sitting beside George and Laura Bush at a football game.

Bush opposed gay marriage throughout his eight years in office, and faced condemnation for his role in leading the US into war with Iraq and Afghanistan. Meanwhile, Ellen is one of the most famous LGBTQ people in America.

In a monologue on her show earlier this week, Ellen defended her friendship with Bush, saying she’s friends with a lot of people who don’t share her beliefs.

During the game they showed a shot of George and me laughing together and so, people were upset. They thought, why is a gay Hollywood liberal sitting next to a conservative Republican president? …When I say ‘Be kind to one another’, I don’t only mean the people that think the same way as you do. I mean be kind to everyone.

Many celebrities praised Ellen’s response, including Jamie Foxx, Kendall Jenner, Jennifer Garner, and Reese Witherspoon, who said in a (now-deleted) tweet: “Thank you for this important reminder, Ellen!”

F*ck all of these people! From Jamie Foxx to Reese Witherspoon! F*ck them all! pic.twitter.com/mevQ5xp6QP

But like most things, it’s not as simple as that. This is about more than ‘difference of opinion – Bush’s actions in office had massive consequences for many marginalised communities, and resulted in the deaths of thousands of people.

Since leaving office, he’s adopted the image of a mischievous grandpa, swapping sweets with Michelle Obama and painting pictures of his dogs – but last year he lobbied to get his former staff secretary Brett Kavanaugh on the Supreme Court, and vouched for Kavanaugh even after he was accused of sexual misconduct.

As many people have pointed out, to be able to overlook all of these things is a sign of privilege:

When People say "I'm friends with people I don't agree with" they mean this person or my friend's beliefs and politics doesn't affect my freedom, existence and most importantly my money. Cos if it threatens either of those 3 directly that "friendship" is over.

Disagreeing with friends that wear fur is not the same as being friends with an anti-gay war criminal President that directly and negatively impacted millions of lives.

One celebrity going against the grain is Avengers actor Mark Ruffalo, who said that until Bush is “brought to justice for the crimes of the Iraq war, we can’t even begin to talk about kindness”.

Sorry, until George W. Bush is brought to justice for the crimes of the Iraq War, (including American-lead torture, Iraqi deaths & displacement, and the deep scars—emotional & otherwise—inflicted on our military that served his folly), we can’t even begin to talk about kindness. https://t.co/dpMwfck6su

Ellen has yet to respond to the backlash towards her defence of Bush.

Constant mask-wearing and the general stress of th