Insta Creep: An Influencer Is Being Called Out For Turning Her Motorbike Accident Into A Photoshoot…

Hey Nashville! I sure do love you!! ??? . If you’ve been here or live here, tell me what your favorite thing about this place is. If you’re not here, and find it possible to visit someday, DO. I can’t explain the magic, you just have to see for yourself! But if I had to try, it’s the community, and I believe the community is what it is because of the music. There’s something about it. So much music is made here, and music is this extraordinary language that the whole world understands with or without lyrics. The vulnerability it takes to speak this language is deeply honest, and profoundly connecting. Gather music makers in one place, and the potential for true community explodes. This city is lit up with it and hasn’t dimmed for a moment in the 5 years I’ve lived here. Actually in L O V E.

Today in influencer weirdness… A lifestyle blogger is being called out for turning her ‘motorcycle accident’ into an impromptu photoshoot.

Nashville-based Tiffany Mitchell got into an accident two weeks ago that left her with a few scrapes – a photographer friend had been driving along taking pictures of her at the same time, and continued the shoot even after Tiffany was thrown from the bike.

The photos show the blogger lying on the side of the road, battered and dirty: 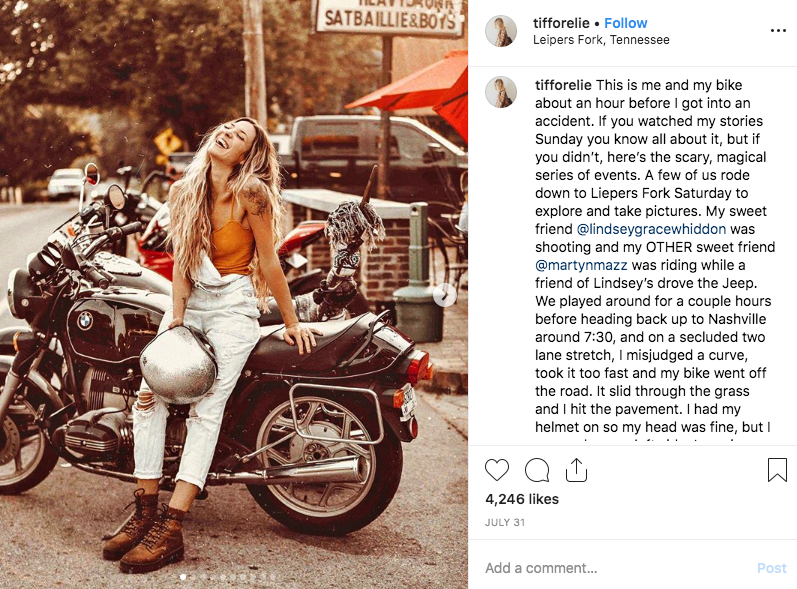 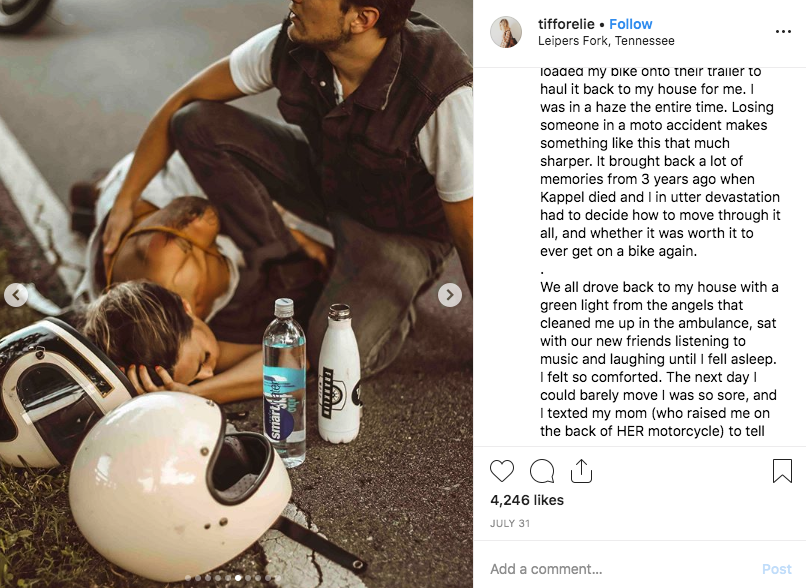 Tiffany posted a long caption describing the accident as a “scary, magical series of events” and said that strangers tended to her and helped her get back home.

But some people have questioned the whole thing, asking why a friend would continue to take photos of her lying in the road, and why a bottle of SmartWater can be seen prominently in one shot. “Who DOESN’T take arty photos in the midst of a motorcycle crash, amirite?” wrote one commenter.

Tiffany told BuzzFeed that the shoot was in no way staged, nor does she have any deals with the water company:

I didn’t know [my friend] was taking them, but later on when she showed them to me I was so grateful that she captured such an intense moment for me. I would never turn a very important personal story like this into a brand campaign.

The post is now archived due to the influx of negative comments. What a world.

This evening, The Duke and Duchess of Sussex attended #TheLionKing European premiere in London at the Odeon Theatre. In celebration of the film’s release, The Walt Disney Company announced #ProtectThePride, a global conservation campaign to support efforts protecting the rapidly diminishing lion population across Africa. As a part of their commitment to this cause, Disney also made a donation to The Duke of Sussex’s upcoming environment & community initiative which will be formally announced this autumn. The Duke and Duchess are committed to advancing conservation efforts across Africa and around the world, and working with communities to ensure a sustainable future for the planet. This evening Their Royal Highnesses had the pleasure of meeting the cast and creative team behind the film, as well as supporters of @africanparksnetwork, of which The Duke is President. Photo credit: PA images / Getty images – Chris Jackson

Elton John has defended Prince Harry and Meghan Markle over their use of his private jet.

Harry and Meghan recently went on their first family holiday with baby Archie, staying at Elton’s home in Nice.

The couple are passionate about the environment, so when paparazzi photos leaked of them boarding a decidedly eco-unfriendly private jet, people were none too impressed.

However, Elton has spoken out in their defence, saying he is “deeply distressed” by the “distorted and malicious” accounts of the trip in the media.

I am deeply distressed by today’s distorted and malicious account in the press surrounding the Duke and Duchess of Sussex’s private stay at my home in Nice last week. Prince Harry’s Mother, Diana Princess Of Wales was one of my dearest friends. I feel a profound sense of obligation to protect Harry and his family from the unnecessary press intrusion that contributed to Diana’s untimely death. After a hectic year continuing their hard work and dedication to charity, David and I wanted the young family to have a private holiday inside the safety and tranquility of our home. To maintain a high level of much-needed protection, we provided them with a private jet flight. To support Prince Harry’s commitment to the environment, we ensured their flight was carbon neutral, by making the appropriate contribution to Carbon Footprint™ I highly respect and applaud both Harry and Meghan’s commitment to charity and I’m calling on the press to cease these relentless and untrue assassinations on their character that are spuriously crafted on an almost daily basis.

“Prince Harry’s mother, Diana Princess of Wales, was one of my dearest friends,” the singer wrote in an Instagram post. “I feel a profound sense of obligation to protect Harry and his family from the unnecessary press intrusion that contributed to Diana’s untimely death.”

David [Furnish] and I wanted the young family to have a private holiday inside the safety and tranquility of our home. To maintain a high level of much-needed protection, we provided them with a private jet flight.

Elton said that he “highly respects” Harry and Meghan’s dedication to charity work, and made their flight carbon neutral with a donation to the organisation Carbon Footprint.

“I’m calling on the press to cease these relentless and untrue assassinations on their character that are spuriously crafted on an almost daily basis.”

Tom Felton and Emma Watson are hanging out again and stirring up all kinds of FEELINGS for Harry Potter fans.

Apparently, they were in South Africa together at some point, and Tom posted a picture of him teaching Emma how to play guitar.

They can’t keep doing this. Remember that cute skateboarding video? The Draco/Hermione shippers are out in force, wondering if they’re still just friends or what.

“I wanna cry. Really wanna cry. Feltson is real,” commented one hopeful Dramione truther. They’ll probably never tell us, but we can dream, can’t we?

And The Rock got married! So you can’t marry him, sorry.

The actor/wrestler/legend wed his longtime girlfriend Lauren Hashian in Hawaii on Sunday, and it looked only gorgeous:

So cute. The pair have been dating since 2006 and have two daughters together, three-year-old Jasmine and Tiana, who is one. Dwayne has a teenage daughter, Simone, from a previous marriage (she’s currently following in her dad’s footsteps and training to be a wrestler).

Congrats to the beautiful couple!