Fresh from spending Christmas in Limerick (yep), Taylor Swift hosted a fancy dress party on New Year’s Eve for a ton of her famous friends.

The theme was ‘childhood heroes’ – Tay went for The Little Mermaid, Gigi Hadid was Mary Poppins, Blake Lively was Dorothy from the Wizard of Oz, and Ryan Reynolds was… himself?

Just a spoon full of sugar helps 2018 go down … in the most delightful way! HAPPY NEW YEAR ! ❤️

Celine Dion GOT HER LIFE at Lady Gaga’s Las Vegas show, and subsequently posed on a stretcher because she’s gas. How iconic is that photo of the two of them BTW?

Videos of the singer giving it socks to Gaga’s performance went viral on social media – Celine has been doing Las Vegas residencies for years now, so to impress her is something special.

Celine Dion getting her life at Lady Gaga's show pic.twitter.com/Gj7oV28kf3

Just watching that video has given us the strength to go on today. Writing on Instagram, Celine said:

I had so much fun last night Lady Gaga! Your energy on stage is contagious and you literally took my breath away! I wish you all the best with your Vegas residency!

Blessed by the queen! Congrats, Gaga.

Don’t worry everyone, Justin Bieber and JoJo Siwa have squashed their beef.

Unless you are a) obsessed with YouTube or b) the parent of a small child, you probably don’t know who JoJo Siwa is – short story is, she’s a dancer and very popular YouTuber who is responsible for the popularity of those huge hair bows every girl under 12 is wearing. She talks super fast and super loud, and it’s hard to know exactly what she’s saying, but my do the kids love it.

She also has a HUGE range of merch. You name it, she has her face on it. Her bedroom is entirely decorated with her own stuff, and she got this car for Christmas:

The car was done up by West Coast Customs (yes, the company from Pimp My Ride) and after they re-posted JoJo’s image of their work, Justin Bieber simply commented: “Burn it.” 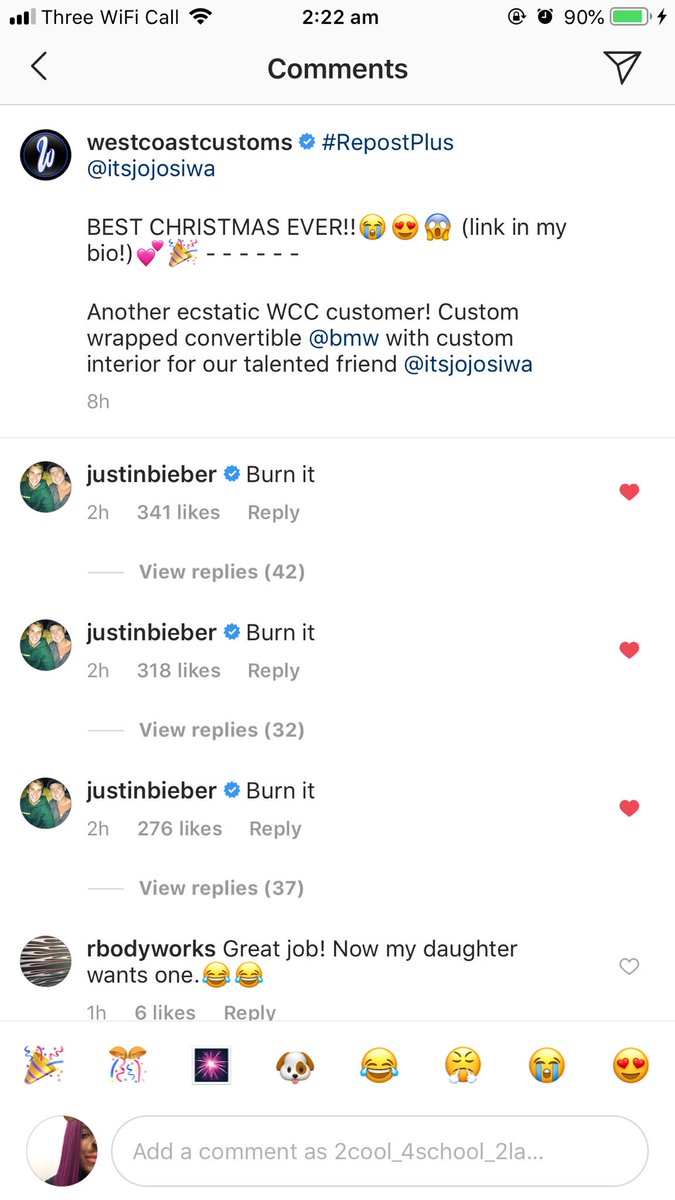 JoJo’s fans went mad – her mam, Jessalyn Siwa, replied telling Justin to “burn your own things”, which… not the best comeback, Mama Siwa.

Biebs decided to end their feud via Twitter, telling JoJo that he has nothing against her, it’s the colours of the car he doesn’t like:

JoJo showed she was #unbothered by it all by posting a picture of her in the car with a Justin Bieber cut-out, captioning it: “Burn it.”

Can’t help but side with Justin on this one. That car is rotten.

farewell 2018, you fuck. i hope this new year brings you all much laughter, clarity and healing. ? be gentle with yourselves and each other. if we made it thru this last year, we’ll for sure make it thru this one. thank you for everything. ?

And finally, Ariana Grande ended 2018 by getting another new tattoo.

Ari has fairly added to her collection over the past year, from the myriad of tiny inkings she got with Pete Davidson, the Spirited Away tattoo on her arm, and the post-breakup hand tat.

This delicate one says “let’s sing” in Japanese lettering:

this is so cute