The littlest light of our lives ✨ At 3.32am this beauty made a rushed and amazing entrance into our lives… ? Remi Jo Quinn ? We adore you baby girl… you are pure perfection ??

Rosie Connolly has shared an extremely cute photo of her little lad meeting his newborn sister.

Remi Jo Quinn was born early on Monday morning, just a few hours after Rosie’s baby shower – they left the hospital yesterday and both mother and baby appear to be doing very well.

Rosie’s four-year-old son Harry met his baby sister and did exactly what every child has done to a newborn sibling: Prodded her face.

Watching him become a big brother has been so overwhelming and fills me with so much pride ❤️ Harry is loving his new role and has blown us away with his love for Remi already ✨ My world ? #momoftwo #newborn #newmom #bigbrother #babysister

Get right in there Harry!

“Watching him become a big brother has been so overwhelming and fills me with so much pride. Harry is loving his new role and has blown us away with his love for Remi already,” Rosie wrote. So lovely. Congrats again to the growing family!

Tristan Thompson is trying to get in Khloé Kardashian’s good graces… by liking her Instagram photos. That’s not how this works Tristan! Try not cheating on her!

In fairness, she definitely orchestrated all of those sequin bodysuit photos to show him what he was missing, and he just took the bait. He appears to have unliked it now that he’s been caught out, but there are of course screenshots all over the place:

We haven’t heard to much about the basketballer since the split – the KarJenners have been directing their ire towards Jordyn Woods, perhaps a little unfairly.

She’s just recorded an appearance on Jada Pinkett-Smith’s Facebook talk show, so no doubt we’ll be hearing her side of the story very soon.

OK, so there’s lots of chat about Irina Shayk unfollowing Lady Gaga after the Oscars, but all is not as it seems.

Bradley brought his girlfriend Irina and his mam to the Oscars on Sunday – Irina and Gaga sat beside each other in the front row, and they seem to get on just fine.

But after that chemistry-loaded performance of Shallow, people were looking for proof that Irina was FEWMIN’ with Gaga, and discovered she wasn’t following her on Instagram:

Okay I’ve done the research guys, Irina and Lady Gaga DO NOT follow each other on Instagram. I’M JUST SAYING.

Look, this much is true, but there’s no evidence that Irina was ever following Gaga on Instagram, and Gaga isn’t following Irina either. It’s called acting, guys.

Crazy Rich Asians actress Gemma Chan revealed the benefits of wearing a voluminous, tent-like gown to the Oscars – you can pack snacks!

Gemma wore a shocking pink Valentino dress on Sunday night, and everyone was very excited to note that it had pockets. And what was in those pockets? Cookies and rice crackers. 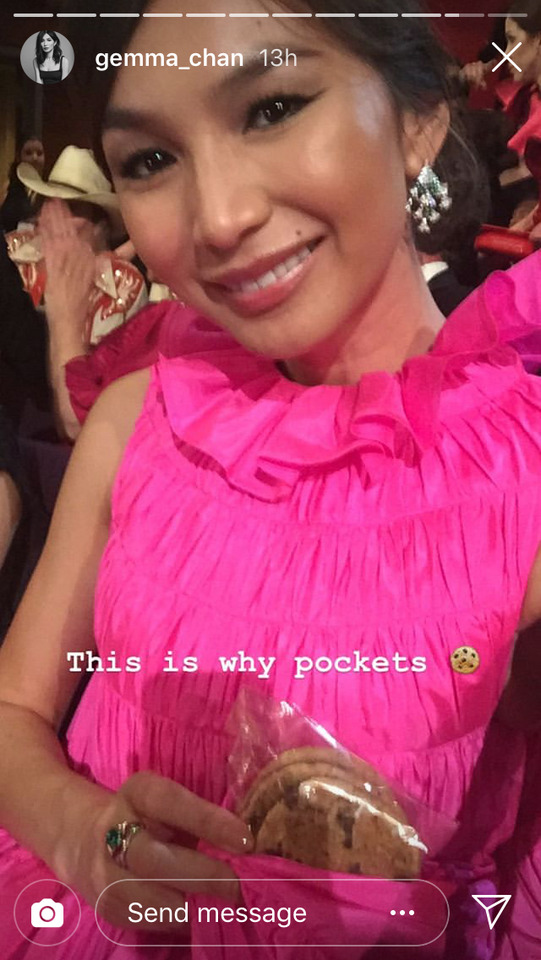 The hunger is real ? https://t.co/mqiL0WOCf7