It Looks Like Scott Disick And Pete Davidson Are Besties

Plus, he's helping his Scott and Travis Barker's relationship!

Scott Disick seems to approve of Kim Kardashian’s new beau Pete Davidson, if social media posts are anything to go by.

Scott shared a video to his Instagram story of Pete leaving his house in a pink golf cart, Kim’s pink golf cart she received from Kris Jenner at Christmas, all smiles and bidding Scott goodbye.

Scott jokingly referenced Pete being the Pizza delivery man in the video, thanking him for dropping off his food. 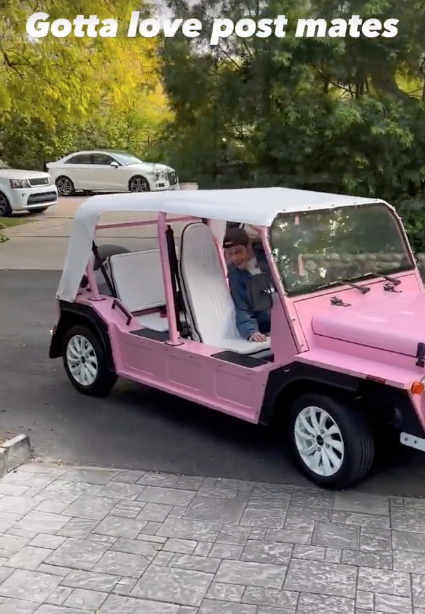 Scott is Kourtney Kardashian’s ex-boyfriend and father to her three children, he is still very close with all the Kardashian/ Jenner clan and we expect he will still be on their upcoming Hulu show.

We aren’t sure how Scott feels about his ex-Kourtney’s engagement to Blink 182 drummer Travis Barker, considering she never was interested in marriage when they were together.

But we are glad to see him getting along well with Pete!

This isn’t the first time we’ve seen these two enjoying some time together, in March, the pair had a boy’s night while Kim celebrated the launch of Skims Swim in Miami.

Taking to Instagram, Pete shared a hilarious video of himself, Scott and some friends watching the crime drama The King of Comedy.

The only problem… all the lads except for Pete fell asleep during the film. His video showed all their pals, Scott included, dozing off on the couches as the film played. Before panning back to Pete, who looked unamused with his friends’ early night.

But seeing some humour in the situation, he sarcastically captioned the post, “Boyz night was wild”, with some bed emojis.

It has been reported that Pete is one of the helping hands in the relationship between Scott and Travis Barker. The pair may not have started out as best friends, but their mutual friendship with Pete may be helping to keep things civil.

A source told Hollywood Life, “Pete and Scott have become close friends, but Pete has been friends with Travis forever…Pete is trying to play middleman to make a friendship happen between them.”

A second source added that the pair being able to chat and be friendly is a huge step, they said, “That doesn’t mean they’re going to be hanging out one on one anytime soon, but it does mean they can be amicable with each other because they’ve come to an understanding that it’s not about them. It’s about Kourtney and the kids.”