Jameela Jamil Has Called The Kardashians ‘Double Agents For The Patriarchy’, And Ouch 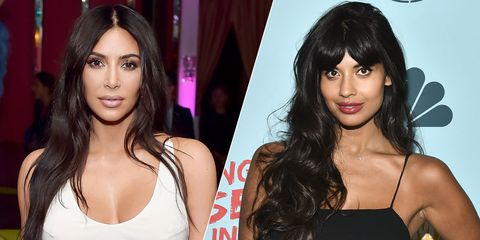 Not one to shy away from voicing her opinion, it appears that Jameela Jamil is back at it again calling out the celebs.

When the TV presenter and actress appeared on the podcast Change the World, she said that the Kardashians are profiting from the patriarchy.

In the interview, Jameela said that just because the Kardashians are a team of women, does not mean that they do not reinforce harmful ideas of how women should look, behave, and be.

Jameela also goes on to explain what exactly a ‘double agent’ is:

Just did an interview with this guy about @i_weigh and toxicity in society towards women and the detrimental obsessive focus on our looks. Also about my upcoming documentary about sexual consent for the BBC. Thanks for having me Krishnan Guru Murthy. ❤️

This is not the first time Jameela has called out the Kardashian clan for how they make their living.

Back in May Jameela said Kim Kardashian was “toxic” and “terrible” for her promotion of a lollipop that claims to suppress appetites (we can’t say we totally disagree there though, Kim, that was not cool).

No. Fuck off. No. You terrible and toxic influence on young girls. I admire their mother’s branding capabilities, she is an exploitative but innovative genius, however this family makes me feel actual despair over what women are reduced to. ☹️ pic.twitter.com/zDPN1T8sBM

In the podcast, Jameela also clarified that she doesn’t care if it is a woman who is profiting from these ideas.

She says: “It’s a wolf in sheep’s clothing. Just because you look like a woman, we trust you and we think you’re on our side. But you are selling us something that really doesn’t make us feel good.”

After receiving a bit of backlash for targeting the Kardashians, she said on Instagram that the family were a “symptom, not the cause”.

"You're selling us self-consciousness." Jameela Jamil explains why she thinks the Kardashians are "double agents for the patriarchy", in the latest Ways to Change the World podcast. pic.twitter.com/NWHfGH2wNs

The Kardashian/Jenners are yet to respond, BUT as we all know they are not a family to back down. It’s only a matter of time before things get heated. Let the games begin.