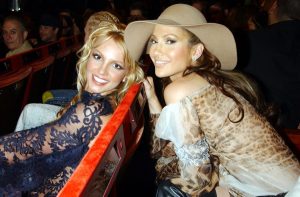 Jennifer Lopez is sending Britney Spears some love amid all the chaos with Brit’s ex-husband Kevin Federline.

Britney and Kevin are in the midst of some drama, after a tell-all interview, during which he claimed Brit’s conservatorship, “saved” the popstar. Conservatorships are an extremely controversial practice, with Britney openly discussing how controlled her life was following the end of her one.

He also bashed the choices she has been making since gaining her independence, particularly her decision to post nude photos online.

Following the drama with Kevin, Britney took to IG, sharing how much she appreciated her freedom. writing, “In a world where you have the right to use your feet…heart…mouth…eyes…and body … to express yourself however you may. Declaration of INDEPENDENCE … for equality and to be equal!!! Not even touching, covering, and holding me against my will for 4 months !!!”

Continuing with a quote from Jennifer Lopez’s 2022 documentary Halftime.

Writing, “As Jennifer Lopez once said, ‘You look right down that camera and tell every little girl in the world to get loud and never ever back down to giving light to injustice!!!'”

Concluding with, “I’m here to share that freedom is a state of mind!!! GOD BLESS U ALL.”

Jen was then quick the show her support for Britney. Resharing Brit’s post on her social media, Jlo told the singer to “Stay Strong” and sent her love.

Britney and Kevin’s latest issue revolves around videos he leaked of Brit giving out to their sons, Sean and Preston.

The video shows Britney chastising her children some years ago. Walking around her bedroom and unaware that she was being filmed by her sons, Britney can be heard saying, “This is my house. If I want to come in here and give you lotion for your face because it’s coarse … y’all better start respecting me, are we clear?”

“You all need to start treating me like a woman with worth. I am a woman, okay, be nice to me, do you understand?” 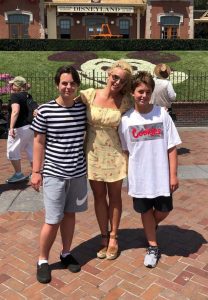 Another video was posted where Britney was giving out to her eldest Sean for walking into an ice-cream shop without wearing shoes. Explaining why she took his phone away from him as punishment, Britney said:

“I was in shock when I looked down on the floor (and saw him with no shoes on). Don’t you think that’s a little weird, your feet exposed in an ice-cream shop, in Alaska weather? Yeah, I think your phone should be gone.”

Along with the videos, Kevin posted an explanation, claiming that he’s sharing the footage with the public to ‘expose the truth’. He wrote, “I can not sit back and let my sons be accused in this way after what they’ve been through”

“As much as it hurts us, we decided as a family to post these videos the boys took when they were 11 & 12”

“This isn’t even the worst of it. The lies have to stop. I hope our kids grow up to be better than this. #NeverFearTruth”

However, many feel that Kevin’s videos are unnecessary. Taking to Twitter a lot of fans tweeted sharing their thoughts, saying that they feel Britney is simply doing her job as a parent in the videos.

Britney is literally just being a mom and disciplining her kids..WHATS WRONG WITH THAT??? maybe the kids are used to getting told yes they can do whatever they want at their dads house

Kevin posting those videos proving once again Britney is such a good mother. She won HARD today. pic.twitter.com/V9zWbIrdva