It’s the question that has been plaguing us for months now; What did Kylie Jenner and Travis Scott name their son.

The pair seem determined to keep a tight lid on what they’ve called the baby and…it’s driving us all a little wild. Some are looking for clues in IG captions, others keeping an eye out for an announcement, the name has even converted some fans in to conspiracy theorists grasping at anything that could possibly be Ky’s baby name.

But we actually just got a pretty big hint about the little one’s moniker. From none other than his auntie Khloe Kardashian.

Speaking on Amanda Hirsch’s podcast, Khloe might have revealed the first letter of the baby’s name.

Saying; “She said she wanted a list of names, like could I help her and I gave a list of names. I don’t know if she said only ‘W’ names. I’m trying to think… but there were a lot of ‘W’ names, I know.”

So could the baby’s name begin with a W?

Well, the KarJenners do love some alliteration, and Travis Scott’s real last name is Webster so it would make sense that Kylie wanted a W. But considering Ky changed her mind on the name Wolf, it’s possible she opted out of W names altogether, still this is the biggest clue we’ve gotten so far.

Currently the most popular baby name guess is Knight Webster. With the theory coming from an IG account some believe belongs to Kylie’s nephew Mason Disick.

Another popular theory is for the name Jacques, and there is a lot of evidence to back this one up. Travis’ real name is Jacques Bermon Webster II. Naming a baby after a parent is already a common practice, but considering Travis is the second Jacques in his family, meaning this baby would be the third, really shows the importance of the name.

And according to a birth certificate obtained by People Magazine, Jacques was actually the baby’s middle name already. So we know they were planning to use the name is some capacity. 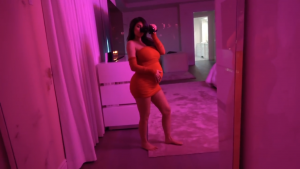 The baby arrived on the 2nd of February, one day after their big sister Stormi’s fourth birthday.

A few days after their announcement, Kylie revealed that they named their baby boy Wolf. But now, that’s changed. “FYI our son’s name isn’t Wolf anymore,” she wrote on her Instagram stories.

“We just really didn’t feel like it was him,” Kylie said. “Just wanted to share because I keep seeing Wolf everywhere.”

So maybe we need to start researching some W name?