As always with Selling Sunset, it seems there's more drama off screen than there is on.

One thing that’s great about Selling Sunset is that it always, always brings the drama. And usually, most of that drama is off screen rather than on. But either way, I’m here for it.

The most recent drama stemmed from the rumours that Christine Quinn faked her pregnancy – obviously, that’s a kind of rumour that’s up there with the worst.

In November of 2021, Christine shared a screenshot of a private message she received from a follower, which read: “Why did you fake your pregnancy? It’s totally OK to admit to having a surrogate but don’t set unrealistic expectations for PP moms when you didn’t even carry the baby yourself,” the message read. “It’s deceitful and a shame.”

Replying to this, Christine simply wrote: “K y’all are beyond f**king sick.”

She then took to Twitter, sharing, “For all yall still mad on pregnancy gate please go look at my ig stories. And apologize. This is seriously so hurtful.”

But it all escalated quickly when Selling Sunset’s Mary was asked her opinion on this in a recent interview. When asked about the accusations in an interview with Us Weekly, Mary said:

“I only saw her one time when she was pregnant. She came in[to] the office and that was the only time I ever, ever saw her pregnant.

“I can see why people would say that [the pregnancy was faked]. As far as I know, she really did [deliver the baby]. She really was pregnant, but we don’t talk and I don’t really see her. So I couldn’t say one way or the other.” 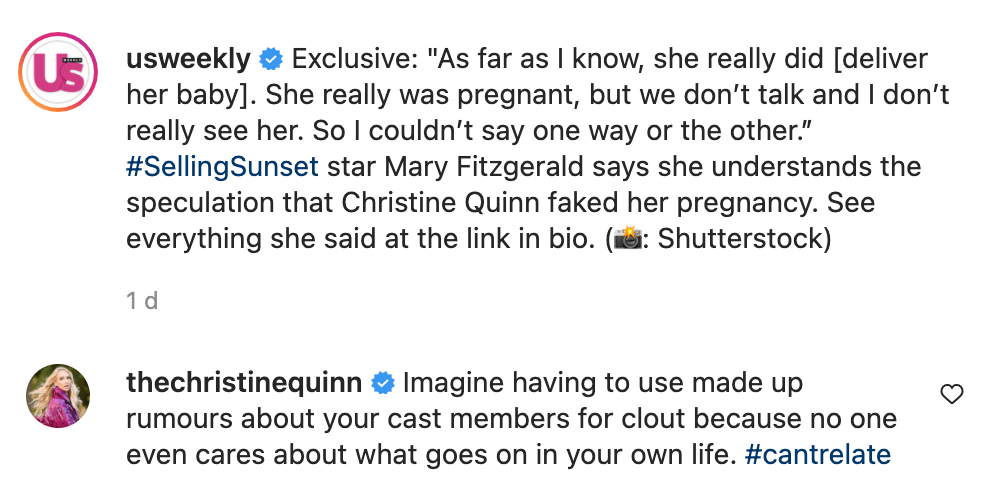 Obviously, this didn’t go down too well with Christine, who commented under Us Weekly’s Instagram post about the interview: “Imagine having to use made up rumours about your cast members for clout because no one even cares about what goes on in your own life. #cantrelate.”

Mary hasn’t commented any further, but I can only imagine that there’ll be a frosty reception when they’re filming next.