So Pete Davidson And Miley Cyrus Have Matching Tattoos

It looks like Kim Kardashian may have some competition on her hands, as rumoured BF Pete Davidson and pal Miley Cyrus have shared that they have matching tattoos.

Appearing on The Tonight Show Starring Jimmy Fallon Pete and Miley told the gas story of how their tattoos came to be. Taking part in a skit on Saturday Night Live, one scene involved Miley and Pete dressing up as babies. Explaining the scenario Pete said:

“We said, ‘We babies,’ and for some reason, we looked at each other and were like, ‘That’s a great tattoo” 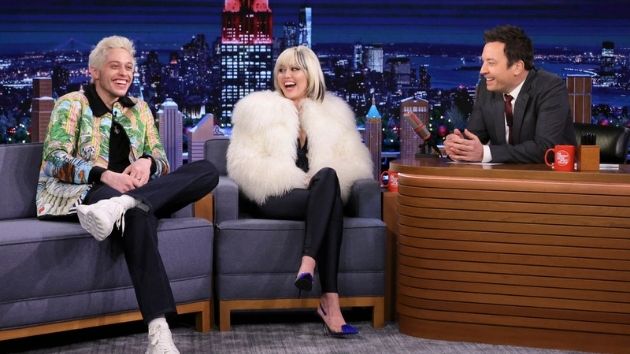 Finding the catchphrase so funny, the two decided to get it tattooed on them forever. However, the joke was short-lived as Pete decided to get his lasered off sometime later. Realising it was gone when she spotted Pete in a Smart Water advert, Pete jokingly admitted that he got rid of it because it reminded him of a ‘dark time’ in his life.

“And then I burned mine off and you still have yours”

In what was a very eventful night indeed, Miley also serenaded Pete on the show. Singing a cover of ‘Yvonne Fair’s It Should Have Been Me’, Miley referenced his relationship with Kim Kardashian, joking that she was upset about the news.

“Pete Davidson this song is for you. When I saw those photos, this is what I played,” Miley said.

Seeing the funny side of things, Pete laughed and covered his face with embarrasment as Miley continued “Pete Davidson, how did you do this to me.”

Sharing a cute snap of the two on social media, Miley captioned it:

“BIG DEBUT ENERGY. Pete & I are official! Watch @fallontonight Our first show together as a pair! We’ll be talking about #MileysNewYearsEveParty in Miami!”

She’s coming for your man Kimmy, watch out!

You can check out the full clip below.