What's even better than an epic romance? An epic split.

Anyone that was sentient in 1994 will remember this one, and the horror we all felt when everybody’s favourite couple bit the dust in Friends. Yes, they were on a break, but yes, Rachel had every right to be disgusted that Ross boned someone else mere hours later and then went to great lengths to lie about it and try to cover it up. The bit when she calls around to make up and the girl he slept with is hiding behind the door has NOT aged well. They would of course end up together many years later, but all that bullshit could have been avoided, you guys. 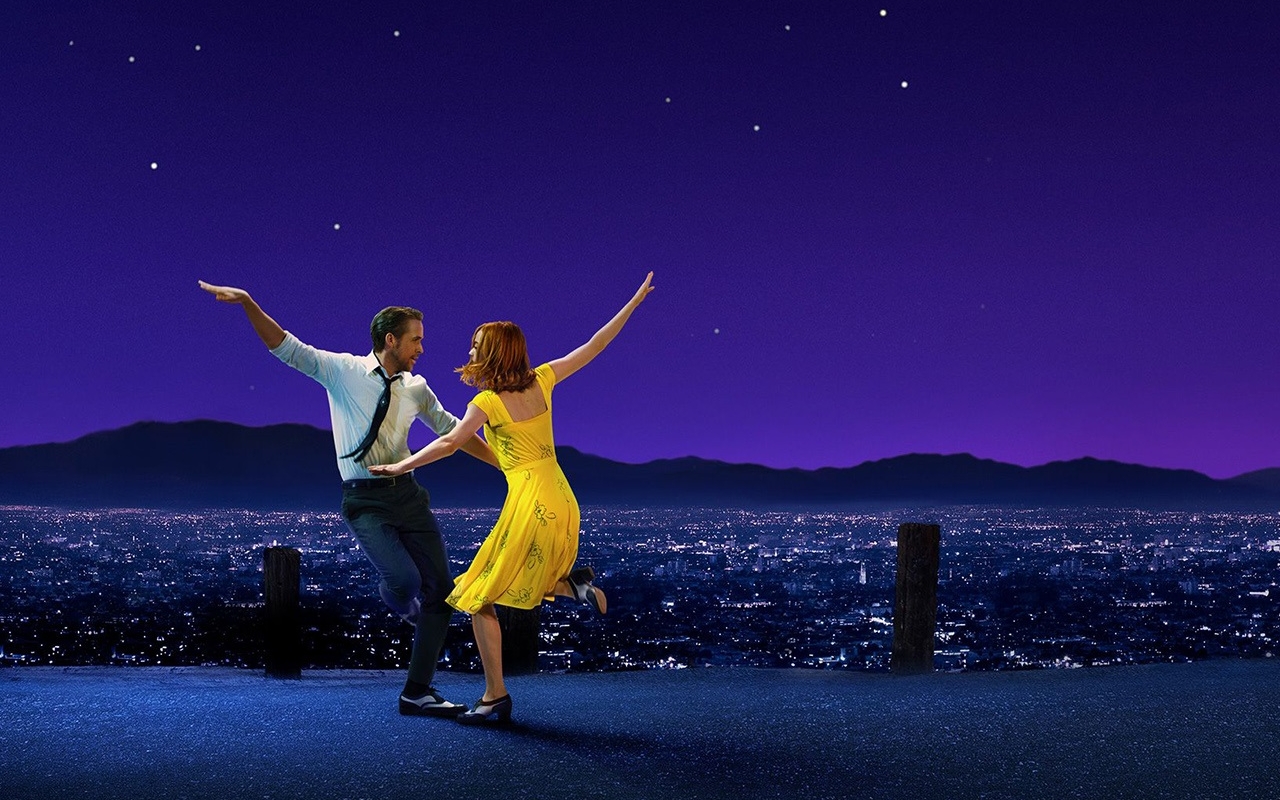 You don’t automatically think of La La Land as being a break up film, but the final scenes are an absolute killer! The musical tells the story of Mia and Sebastian as they fall in love at the exact same time as their respective careers begin to take off. First his, then hers, they just can’t seem to meet in the middle and make it work. At one point it seems like it’s all going to straighten out and they’ll live happily ever after, but don’t get your bloody hopes up. I learned the hard way. 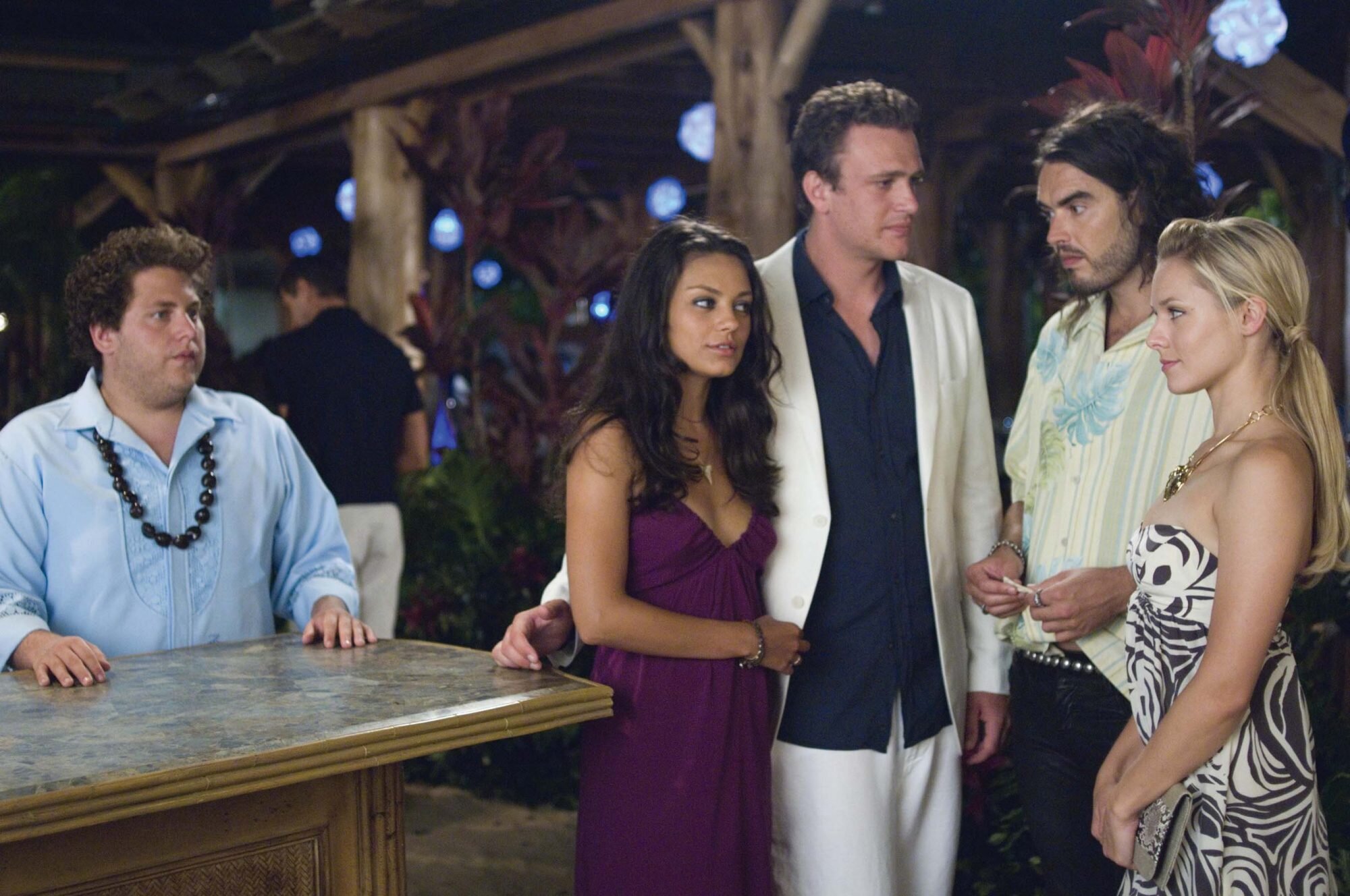 This film is loved by men and women alike, and is the perfect blend of comedy and heartache. Jason Segel’s character is unceremoniously dumped (while naked) by his long-term love who just happens to be a famous TV actress played by Kristen Bell. It turns out she’s ditched him for a rock star (played by Russell Brand). He’s not dealing well with the break up, so he heads to Hawaii to recuperate, only who does he bump into but his ex and her new fella. Sake! However, he meets a very gorgeous and sound Mila Kunis, too…

Adam Sandler is brilliant in this lovely film about a romantic band leader who’s all excited for his own big day after singing at countless others, only to get dumped at the altar. He then gets very bitter and hostile to the point where his entire career is in jeopardy, until he meets a sweet waitress named Julia who brings him back to life. Only problem is, she’s engaged to a complete asshole.

Based on the book by Elizabeth Gilbert and produced by the star Julia Roberts, this semi-autobiographical film tells the story of a woman who is getting divorced in her mid-thirties, and decides to leave her entire life behind, setting off on a journey of self-discovery around the world. She wants to eat pasta and gelato in Italy, nourish her spiritual side in India, and eventually seek balance in Bali. Of course, she meets a dashing new fella played by Javier Bardem just when she’s not looking for love. Great for anyone who’s ever thought of making a run for it.

I remember the pure agony I felt when Buffy and Angel split, because it was so gosh darn unfair. He’s an immortal vampire, she’s a vampire slayer, and they were meant to abstain from doing the bold thing (because sex is evil, obvs). But they did it, and he turned into the most evil vampire that ever was, leaving Buffy and us viewers absolutely devo. They then continue to break up and make up (which mostly involves her killing him for the greater good) until he eventually ends things and moves away just to stop the vicious cycle of utter heartache.

Eternal Sunshine of the Spotless Mind

This is a strange film, but Jesus, it’s heartbreaking – and a bit of a head melt. Kate Winslet and Jim Carrey meet on a train and fall madly in love, completely unaware that they were previously a couple that had split and decided to have their memories of one another wiped. When they find out the truth, they’re horrified – but also think they’re kind of meant to be together, and that their unending connection can’t be ignored. It’s a film that really makes you think about the nature of relationships, and why we feel the way we do about certain people. NOT good if you’re freshly broken up.

You know straight off the bat that this is a love story that doesn’t end well, but you can’t help but get invested in Tom and Summer’s romance because it’s so gosh darn cute. You can tell this one is going to be trouble, with her manic pixie dream girl personality and beautiful fringe. But she plays with Tom’s poor little heart and then leaves him destitute. Sob.

Elle Woods is a queen among blondes at her LA university, and expecting a proposal any day now from her boyfriend Warner. Instead he dumps her, and heads off to Harvard Law School in search of a more serious woman to support his political aspirations. Not one to take such news lying down, Elle follows him to Harvard, enrols and then excels, sickening her ex and finding her own talent along the way. We stan a pink leather-wearing legend.

Sex and the City

Oh, there are so many sad breakups in this show. Carrie’s two dumpings of Big (both of which were kinda irrational, if we’re honest) to her dumping of Aidan; Samantha’s heart being shattered by Richard the pig, and Miranda and Steve falling apart over their different levels of maturity. And who can forget Charlotte and Trey, or Berger’s post-it?! But the most chaotic and dramatic breakup of all was when Big dithered before marrying Carrie, basically ditching her at the altar. When she launches herself at him and batters him with her bouquet, we all felt it.

A tale of redemption if there ever was one! At the beginning of this iconic film, Goldie Hawn, Bette Midler and Diane Keaton have all been abandoned by their husbands for younger women. Their fourth friend tragically takes her own life after suffering similar heartbreak, so the trio vow to not let their dastardly exes get the better of them – and of course, succeed with such style and panache, it’d almost make divorce seem glamorous!

Jennifer Aniston was going through perhaps the most public breakup of all time when she filmed this movie, having been dumped by husband Brad Pitt for Angelina Jolie. However she turned her heartache into dollar bills, because you can’t buy the kind of PR this film got! Plus she fell for her co-star Vince Vaughan and ended up dating him for years, despite playing a couple falling apart on screen.

The Way We Were

Famous for the iconic “Your girl is lovely, Hubble” ending that’s also referenced beautifully in Sex and the City, this 70s movie tells the story of political, difficult Katy, and her perfect, blonde, handsome husband, and why the two just can’t seem to stay on the same page. Their different backgrounds, careers and desires always cause issues, despite their deep love for one another – because sometimes, love just isn’t enough.

DeuxMoi's Identity Has Just Been Revealed

Justin Bieber Is Coming To Dublin

Prepare For This New TV Series About Love, Friendship And Navig...

Liam Payne And Maya Henry Were Reportedly Already Split When He...