There are a TON of dresses to feast your eyes on.

Last night’s Oscars was a veritable SEA of fashion, and we can’t wait to go through it all with a fine-tooth comb.

No offence to the lads but, unless you’re really shaking up the black suit, we’re not talking about you (so that’s most of the men, unfortunately). Buckle up, because we’ve got a lot to discuss.

On the red carpet at @theacademy 2020 awards #SaoirseRonan, nominated for a Best Actress award for @littlewomenmovie, is in a custom #Gucci black, ivory and lavender gown with deep V-neck, silk duchesse waist ruffles and moiré skirt designed by @alessandro_michele. She completed her look with #GucciHighJewelry earrings in white gold, spinels and diamonds, rings in white gold, rubellite, pink sapphires, diamonds, and a pink tourmaline and a brooch in white gold, tsavorite and diamonds. #AlessandroMichele #Oscars

Who better to begin with than our own Sir Shaw? This Gucci dress was a big statement, and kinda weird (do you also see Ursula from The Little Mermaid in it?), but we love it on her. It’s very “I’m nominated for the fourth time and I know Renée is gonna win but FECK YOU, CARRY MY TRAIN.” Go off, Saoirse.

Has Janelle Monae ever looked bad in her life? Serious question. This hooded gown is the perfect distillation of her futuristic style, and the beauty ties it all in too – she’s got jewels on her eyelids and on her nails. She never half-arses it, and we appreciate that.

You know who else never half-arses it? Billy f**king Porter! This seems almost related to his iconic Egyptian Met Gala ensemble – that gold feathered bodice is a work of art in itself. Snaps to Billy once again.

A post shared by Samantha Burkhart (@samanthaburkhartstylist) on Feb 9, 2020 at 5:08pm PST

Yep, here’s Billie making Chanel bend to her idiosyncratic style, and not the other way around. She looks cool as hell and we hope she didn’t have too much trouble with those nails.

@TChalamet attends the 92nd Annual @TheAcademy awards wearing a #Prada minimal and sportive blouson and trousers ensemble in gabardine Re-Nylon, the newly conceived Prada gabardine made of #recycled nylon. The boxy and deconstructed jacket, with collar and cuffs, is embellished by a silk satin stripe, as well as the trousers. #PradaPeople #Oscars⠀ #PradaReNylon

Here’s Timmy! One of the only men mixing it up when it comes to suiting, in a jacket and trousers made from recycled nylon. He pulls it off because of his inherent Chalamet-ness. It’s a real skill.

It’s hard to know if this is nice, or if we’re just distracted by the giant brooch and the floaty armbands (because when she lifts her arms, you’ll see that they’re entirely unconnected to the dress). She is beautiful, and the red lip is perfect, but argh, we’re just not feeling it.

Hello to Best Supporting Actress winner Laura Dern! We’re not sure on the boob tassels, unfortunately. Maybe if the black bra-thing was more of a bodice, it could convince us? It’s difficult to criticise because we love her so.

JUSTICE FOR GRETA GERWIG. And Lorene Scafaria, and Lulu Wang, and all the female directors overlooked for nominations this year. Greta turned with partner Noah Baumbach in a massive necklace and fringe-trimmed Dior gown. It’s simple, but she works it.

A post shared by Samantha McMillen (@samanthamcmillen_stylist) on Feb 9, 2020 at 8:45pm PST

She looks so good I feel SICK. Sparkles! Cleavage! A cape! Sometimes, nude-coloured dresses can lean a bit boring, but last night this was subverted in a most delightful way. For example…

…Here’s Sandra Oh in a simply enorm gown by Elie Saab. Lop off the ruffles on the sleeves and this would be a complete winner, but as it stands it’s got just a bit too much going on.

Scarlett went for a more champagne-hued nude, and the end result is seeeeexxy. She looks like a million dollars, though we fear those long pieces of fringe got caught in everything and everyone. Health and safety, people!

Make way, make way, the queen is here. And she’s newly blonde! We do have a quibble about the strange sleeves, but to be honest it’s just a small one. She looks fabulous.

Oscar-nominated actress, and previous winner, @CharlizeAfrica was a statuesque and peerless presence on the 92nd Academy Awards ceremony red carpet in a black silk custom #DiorCouture dress by @MariaGraziaChiuri. #StarsinDior

It’s a black dress, but a good one, we’ll give her that. The necklace seals the deal.

She is stunning. Come on, she’s Wonder Woman. This dress, however, is… a lot. A whole lot. Would it be better if it was all one colour? Who’s to say.

Renée has been keeping to a similar silhouette throughout her winner’s lap at all the big ceremonies, but you know what? It’s great on her. This beaded gown is the simple but perfectly tailored.

Maya is a treasure, this sequinned kaftan is everything, and we love her for picking style AND comfort. In our dream world, we would also go Valentino for red carpets.

Natalie Portman arrived in a cape embroidered with the names of all the female directors overlooked for Best Director this year – a move that has attracted some criticism given that Natalie has worked with just two female directors herself in her career. She looks great (that perfect bob!) but we fear that the dress underneath is sheer? Say no to sheer!

This dress? Amazing. The colour? Beautiful. That necklace? Wowzers. But why oh why are people still picking D&G in the year of our Lord 2020? Here, peruse the ‘Controversies’ section of their Wikipedia page for enlightenment.

A post shared by Rebecca Corbin-Murray (@rebeccacorbinmurray) on Feb 9, 2020 at 5:53pm PST

At this stage, I would do anything Florence Pugh asked of me. But something about this dress doesn’t quite sing. Is it because the bottom is so voluminous that the slight little top is over-balanced? Honestly, we need to figure this out.

This is BONKERS and she has NO RIGHT to look as good as she does. She’s dressed as a giant pair of labia! And I love it!

Beautiful Beanie! It’s hard to see from this photo but the gown is entirely sequinned, which gives it an extra bit of magic. That old Hollywood glam suits her.

Speaking of glam, look at Regina King! Versace has done her right. This fits like a glove, and the colour is the best kind of blush pink.

Like Timothée, Booksmart actress Kaitlin also went sustainable with this ethically-made, slinky red gown from Louis Vuitton. She looks fantastic, and the Irish mammy in us is delighted she has a pashmina in case she gets a bit cold.

I mean…thank you to @jasonwu for the custom gown tonight, to @pomellato for this gorgeous responsible gold necklace from the vaults in Milan, to @elizabethstewart1 for putting my looks together for my very first Oscars, to @jordan_grossman for putting those looks physically on me, to @robertvetica for the gorgeous hair and @itsmatin for the beautiful make-up. To @hlopata who swept me through my first Oscars red carpet with Precious backstage holding it down. To my buddy @j_corden for presenting and being the biggest pussy with me and for my girl @carlyjsteel who was by my side the whole night wingwomaning – I ended up kissing Elton John! What a night! 😘

Who needs an Oscar when you ARE the Oscar? That’s what Rebel Wilson said anyway. This dress is a dream.

Sigourney is a legendary actress, and this gown screams ‘gravitas’. That green!

Joker actress Zazie is always the coolest girl in the room, and Thom Browne is extremely adept at dressing the coolest girls in rooms. The necklace makes it Hollywood, but the hair makes it uniquely Zazie.

Would it be an awards ceremony if Rooney Mara wasn’t wearing a black lace thing with cut-outs that would make the average woman weep? It wouldn’t.

Monaghan girlo Caitriona is a former model, and that is never more evident than when she’s pulling off a dress with a high degree of difficulty like this one. It’s hard to imagine anyone else looking as elegant in a puffball top.

Did Blac Chyna look good at the Oscars? Yes. Why was she there? One of the world’s greatest mysteries. 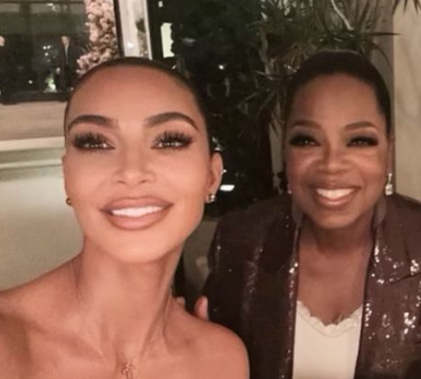