Editor’s Choice: Nice Things To Read, Listen To And Watch During This Rotten Auld Month

This January, Vicki Notaro only wants to experience the lighter side of pop culture.

It is that time of year again – everybody has stopped pretending that January is anything other than the absolute foul cesspit we all know it to be. There is no new me, my gym membership is still criminally underused and I’m over the novelty of fresh stationery. I have the sniffles and a sore back, the weather is shite, the days are short, everyone is broke and miserable and doing Dry January or Veganuary, or both, and it’s all very bloody boring.

Add to that the fact that global politics has practically imploded and things are Very Bad Indeed, that Instagram has gone from being a bit of fun to a place that can very easily give you the fear, and you can’t move without coming across another deep think piece about how Friends was actually totally reductive and offensive (to which I say, go and shite). It can be scary to even open Twitter these days, lads. And that’s without even thinking about the fact that loads of us still haven’t readjusted to having a full time job after a mere ten days off over Christmas. Anyone else’s body clock still effed up?!

So forgive me if I’m looking to be coddled when it comes to entertainment. Understand that I only want to experience the lighter side of pop culture. It is not the time for me to be sucked in to You, the creepy, stalkery Netflix hit that highlights the necessity of updating your social media privacy settings. Ditto any true crime, fantasy epics rife with rape, and any apocalyptic dystopian stuff where Sandra Bullock is sad. (Though if you do like getting stuck into true crime, Cara has compiled a list of her fave Netflix docs here.)

Nor is it the month to curl up before bed with books about murder, sexual abuse, addiction and even overachieving former First Ladies, because all make me feel bad, albeit in very different ways. I don’t even want to hear a sad damn song. Feck off, Radiohead, with your new very deep and meaningful but ultimately bloody serious album.

I know I’m in trouble when my beloved real-life magazines are bringing me down; stories of betrayal and strife that normally thrill me are just further adding to feeling down in the dumps, so I can’t even take solace there. Although may I point out that the February edition of STELLAR is chock full of lovely, life-affirming bits. Cough.

I want lightness, dammit. I enjoy a good weep as much as the next person and normally love to consume culture that makes me feel something, but now is not the time. Right now, all I can manage is easily-digestible chunks of feel-good television, movies that actively boost my mood, and books that don’t put the fear of god in me before I go to sleep. It’s not too much to ask, it’s the very epitome of self-care for a month when a face mask just doesn’t cut it. I need the entertainment version of a gentle, soothing massage. Here are my recommendations.

Ones where not many terrible things happen. Ones where you’re not trying to bend your mind working out what the feck happened. And no memoirs either, because they’re largely written by famous and successful people talking about how great they are – while that can be motivating, I’m not able right now thankuvmuch. Nothing about social issues or moral dilemmas, nein danke.

Gimme Marian Keyes. Gimme the OMGWACA and Ross O’Carroll Kelly books. Gimme glamour a la Lauren Weisberger, the trashy scandal of Jackie Collins, the romance of Danielle Steele. Nice books, to read before bed so you don’t have nightmares.

You know “edgy” is what keeps you hooked on those box sets, gals. But Dancing With The Stars is nice, as is Dancing On Ice. Queer Eye, obvs, and Drag Race. Anything to do with baking, or trying on wedding dresses. Gogglebox is the absolute dream, and I find Room To Improve very soothing. Watch the infamous Bros documentary. Binge on The Good Place, Brooklyn 99, Kimmy Schmidt, heck, feckin’ Mrs Brown. Even Catastrophe was proving too dark for me this week, so keep it simple and sweet. 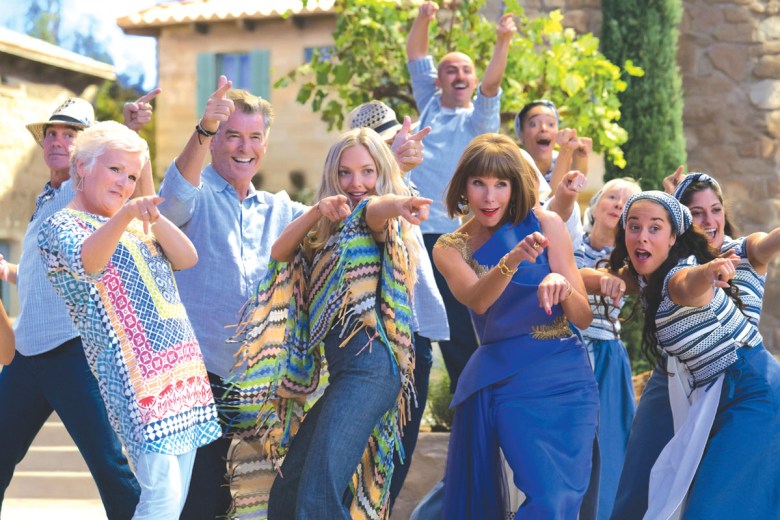 I cannot recommend the work of Nora Ephron and Nancy Meyers enough. Sleepless in Seattle, You’ve Got Mail, When Harry Met Sally. Home Again. The Intern, Something’s Gotta Give. These women know what we need in January, goddammit.

Ditto musicals, although I’m aware they make many people’s skin crawl. Mamma Mia: Here We Go Again, and indeed the original Mamma Mia, are JUST what I needed at the weekend. Grease. Hello Dolly. Mary Poppins. Hairpsray! The Sound Of Music, if you can cope with the Nazis. Just nothing about death or jail – there’s a lot of both in musicals, oddly enough. I am partial lately to The Corrs, a beacon of Irish Niceness. I also follow a playlist on Spotify called Gay Anthems, full of upbeat Pride-esque tunes. The work of Chic, again pretty much anything from the 1980s. Westlife! They’re back, don’tcha know. Anything sung by the cast of Glee.

I knew I was in trouble when even Ariana was reminding me of lost love, and tragedy – even the brilliance of Thank U, Next. So nothing indie, nothing emo. Nothing about slapping bitches, or cheating men. Nothing about losing the love of your life for ever and ever amen. Treat your ears, and thus your mind.

Did I mention the February issue of STELLAR is out now, and pretty much designed to make you feel good? No ranty think pieces, nothing snarky or cruel. Just nice. Ditto this very website, our lovely podcast The Glow Up, and YouTube makeup tutorials that aren’t performed solely on supermodels. See, the internet can be nice too.