‘It’s A Trash Thread. That’s What We Do Here’: Exploring The Darker Side Of Influencer Gossip

On influencer gossip boards, everything from their kids to their dead loved ones is fair game.

In September of 2019, beauty journalist and author Sali Hughes uploaded an Instagram video that was far and away from her usual chats about new foundations and the best cream bronzers. Voice shaking, she described being the victim of trolling from a site dedicated to the discussion of influencers and public figures. She said that the users of this site had told “lie upon lie upon lie” about her career and personal life, so much so that she wouldn’t have known who they were talking about if they hadn’t repeatedly used her name.

“The small group of women involved, most of them disgruntled readers who hated me, gathered daily on a website… They discussed my children, criticised my parenting, mocked my marriage and made personal insults about my husband,” Sali revealed.

The users dove into her family life, including her relationship with her late mother, and accused her of secretly taking money to promote brands, something she vehemently denies. “They acted to hurt me and they succeeded over and over again. It has been deeply traumatic. But they do not get to do it to my family and my career when I’m proud of my conduct in both,” she concluded.

The site Sali is referring to is just one of many message boards, Facebook groups, and Instagram accounts out there dedicated to gossiping about influencers, the existence of which was something of an inevitability. Gossip has always been a way for us to bond with others, whether we’re discussing celebrities or people we know in real life.

Considering influencers are a mixture of both, the lure is particularly strong. Hundreds of people now gather on so-called ‘trash threads’ to give out about influencers, from their ad campaigns to their husbands and children. Nothing is too insignificant to discuss – you might find numerous posts dissecting the way an influencer’s mouth looks while she’s speaking, for example.

The users of these sites insist that they’re not there to bully influencers, but to hold a new and largely unregulated industry to account – and occasionally, that is true. Ireland’s most well-known example of a gossip site, Bloggers Unveiled, rightly called out influencers for using Snapchat and Instagram while driving, as well as failing to declare advertising partnerships. However, the account’s relentless targeting of certain bloggers showed that its motives may not have been strictly altruistic, but at least somewhat driven by a personal vendetta. 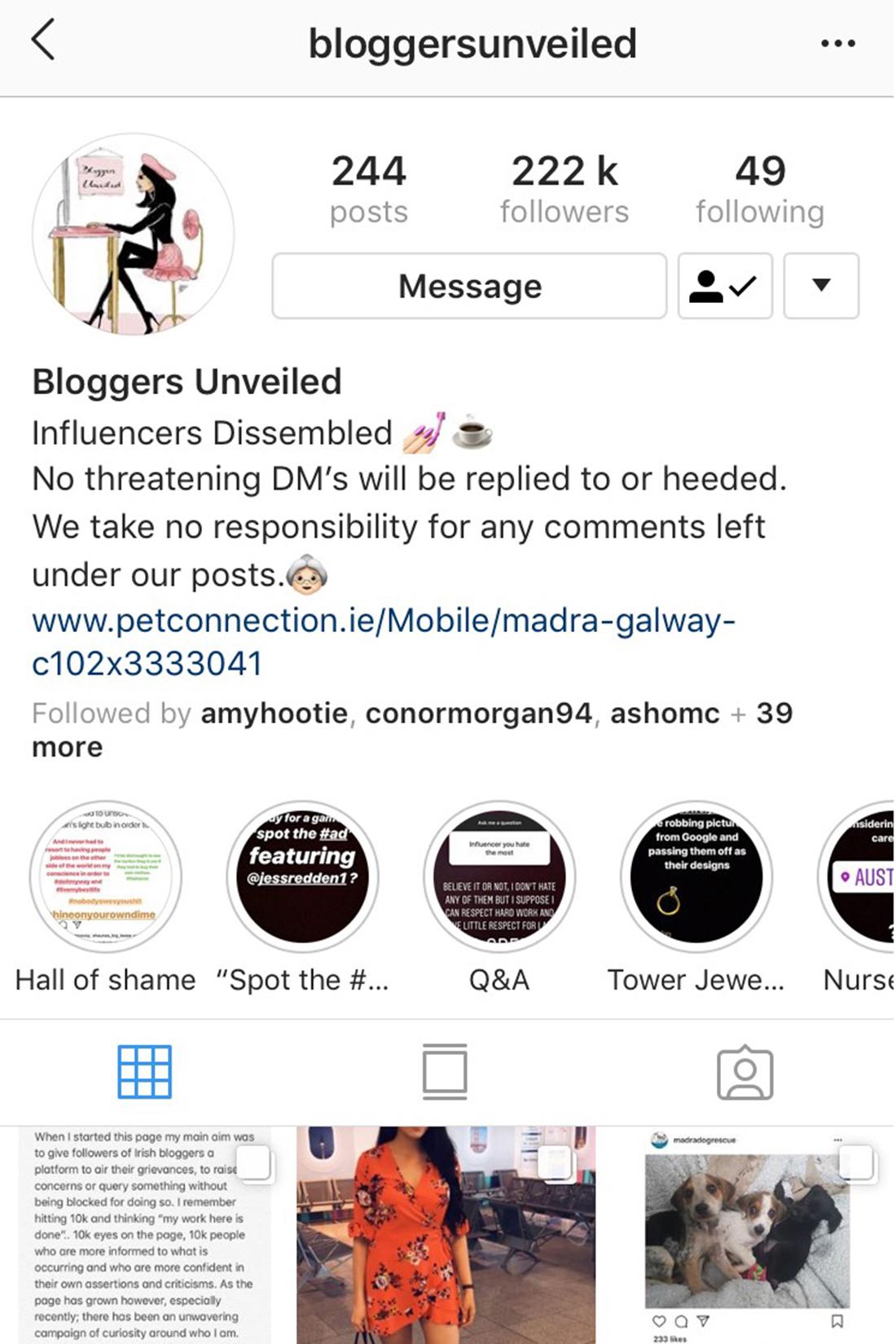 But how does someone even get to this point? According to Senior Counselling Psychologist Dr Cliodhna O’Donovan, it’s easy for people to forget that the person behind the offending Instagram account is a real human being, just like the rest of us. “It’s almost like the objectification of a person – you’re no longer seeing the social media profile as being attached to or a representation of an actual person. It becomes a thing,” she says.

This kind of distancing allows us to say and do things we wouldn’t generally say or do to an actual person. It becomes easy to take someone down almost in the same way as you would criticise a product. [On these boards] you’re meeting like-minded people, where there’s less likelihood for someone to say ‘No, I don’t think that at all’ or ‘I don’t think it’s right to talk that way’. In that case, you’re ashamed, you’re exposed.

Dr O’Donovan believes that gossipers are getting something from participating on these boards, whether they realise it or not. Maybe it’s a feeling of belonging, or even just having something to do. It’s clear from a cursory glance at these message boards that many users treat them as a hobby, checking in with each other every day and excitedly posting any discoveries to the group.

Newcomers who suggest that maybe things are being taken too far, that they should all unfollow this person if they’re bothering them that much, are unceremoniously booted out. This is a ‘trash thread’, goes the response. This is what we do here.

When nobody else is in the office yet so you do a mini outfit shoot & only realise half way through there is another office opposite probably watching you whilst they start their day. 😅

It can be difficult to understand why someone would spend so much time keeping tabs on someone they profess to hate. And not just time, but money too – gossipers have been known to buy products, books and tickets to events by influencers to report back on their quality to the rest of the group. Remember, the stated aim of these websites is to ‘hold influencers to account’, and many users truly believe that they are performing a noble service in uncovering the so-called lies and treachery of online personalities.

How they do this is unimportant, even if it’s threatening and upsetting to the real-life people they’re talking about. And indeed, when an influencer tries to turn the tables on them, gossipers are quick to claim that they themselves are being bullied, something Sali Hughes notes in her video.

“It’s fine to discuss my children, but not to acknowledge theirs. Fine for them to unearth LinkedIn profiles of my relatives and post them online, but pure ‘stalking’ to even look at theirs,” she says.

Fine to lie about me over and over, but not fine to tell them the truth about themselves. Fine for them to panic about their future employability now someone knows how they treat others, but acceptable to attempt to destroy my job, my career, just for fun. The hypocrisy is absolutely outstanding, their self-awareness non-existent.

Do people who ‘put themselves out there’ online deserve to be gossiped about like this? Many would say no, but clearly, more of us think so than we’d care to admit. Influencers are by their nature more beautiful than we are, more wealthy than we are, more popular and powerful than we are. You can see how the idea of bringing a certain one of them down could be intoxicating, and how exciting it would be to discover a community of people who feel the same way.

Influencer Clemmie Hooper, who in December was found to have anonymously trolled fellow influencers on message boards.

It starts with reading a few theories, finding you agree. Maybe then you’re compelled to set up an account and post your own thoughts. The response from the other users is gratifying. Next thing you know you’re checking in every day, discussing videos in minute detail, dissecting Instagram posts, maybe even buying a copy of a book just to make fun of it later with your new internet friends. At that point, it’s more about being part of the group than it is about the influencer. The fact that they’re an actual person with thoughts and feelings becomes irrelevant.

Sali Hughes’ video was met with a huge wave of support from her followers and fellow journalists, as well as calls for the gossip site in question to be shut down. But over on the boards, the users have led it away as yet more evidence of her ‘dishonesty’. Reality is highly subjective on trash threads, and anything that doesn’t fit with the narrative is discarded or discredited.

The real Sali (or Zoe Sugg, or Tanya Burr) will never prevail against the villainous one the users have created, and may even prefer. It’s clear that closing down the sites would not stop the gossip, just move it to another platform. All we can do to stamp out this sort of online bullying is continue teaching people to choose kindness over cruelty, and practising it in our own lives. And please, please remember – you can always unfollow.