‘It’s So Satisfying To Watch A Film Come Together’: 3 Irish Women On What It’s Like To Work In Film

While we love a good cinema trip, we rarely pause to consider all the work that goes into bringing a film to the big screen. What does a producer do exactly? And what’s it like creating prosthetics for a film?

The 17th Virgin Media Dublin International Film Festival returns to the capital from today until March 3, showcasing the best of local and international film. STELLAR spoke to three women who have either produced, directed, or created makeup for films screening at the festival to find out more about making movies.

Louise Byrne is the producer of the documentary short 99 Problems, which premieres at DIFF on February 25

“For as long as I can remember, I’ve always wanted to work in film – from writing letters to JK Rowling aged nine asking ‘to be involved’ in the Harry Potter franchise, to trying to assure my parents that a film degree was a sensible choice whilst filling out my CAO application. It wasn’t until my final year in college (Film and Broadcasting in DIT) that I finally figured out what job I actually wanted within the industry. I was asked to produce a short drama film in my final year – it was my first real taste of production; it was chaotic and every day presented a new challenge, but I loved it! Once I graduated, I joined Motherland as a Production Assistant in 2015 and cut my teeth on award winning commercials and branded content until director Ross Killeen and I developed a film division within the company.

The role of the producer depends on the project and its size – but at the core, being a producer is facilitating the vision of the director. A producer wears many hats – there are a lot of different elements of the project; story development, research, budgeting, enlisting your crew, hiring equipment, getting permits, organising catering, post production – the list goes on. No two jobs are ever the same. And although the hours can be rough, and there are stressful moments, there’s nothing better than a job that excites you. 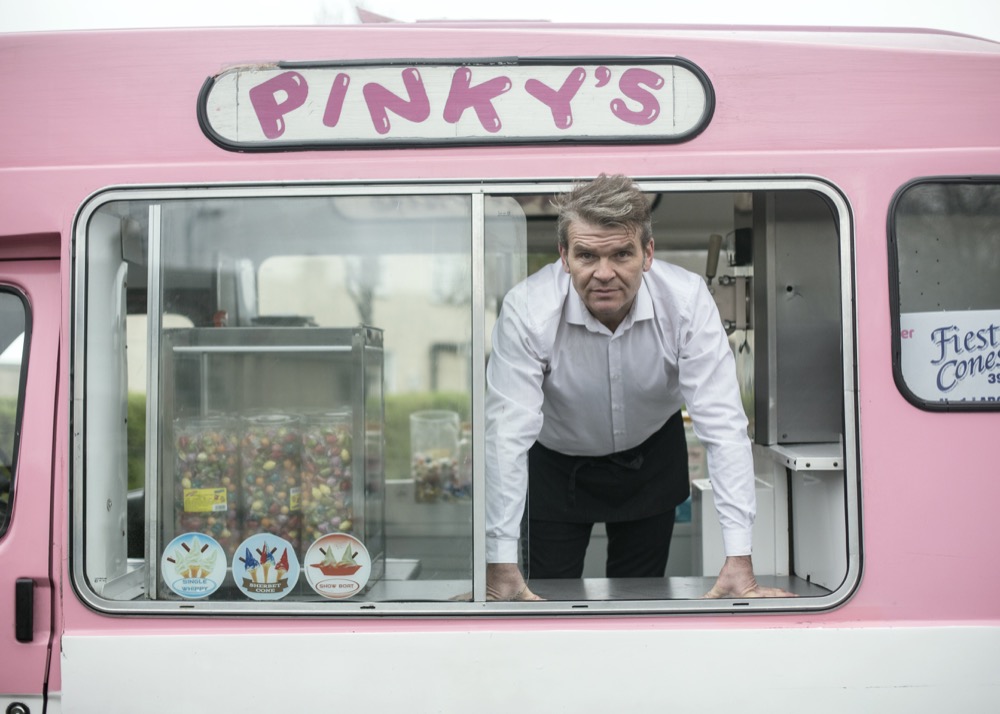 Like all good directors, Ross had a little notebook of ideas, one of which was a documentary idea about ice cream van drivers and their violent territory spats. He also had a title picked out: 99 Problems. On the general concept and title alone, I was sold. What followed was a year of intense cast researching and interviewing and following ice cream van drivers from around the country. A lot of them were really against talking to us, so it took a long time to develop relationships with them. Eventually we met Pinky, AKA ‘King of the Ice Cream Men’ and over the course of a year we interviewed him, joined him at work in the van and met his customers.

It was so satisfying to watch the edit come together and bring that 99 Problems idea to life. We were incredibly lucky and proud to get our world premiere in our hometown at DIFF – 99 Problems is a quintessentially Dublin film, and it’s only right that we start our festival run here.

In recent years, there has definitely been a shake up in the Irish film industry with a very clear push for female representation in terms of directors. The Irish Film Board, now Screen Ireland, have played a huge role in that. There’s great emerging female talent, such as Kate Dolan and Kathryn Ferguson. That being said, within the industry itself, there still seems to be predominantly male roles but it’s open to change. I would love to see more female directors of photography (DOPs) and editors being recognised for their work.”

Madonna Bambino is a makeup and special effects artist who has worked across film and TV. She’s nominated for this year’s DIFF Discovery Award for her work on the short Low Tide

“Initially, I wanted to be an animator, but then after working on a few of my sister Esme’s film projects, I fell in love with creating makeup designs and characters. I knew then that’s all I wanted to do! So I enlisted in IADT to study makeup and hair for TV and film in 2007 and have been honing my craft ever since.

A typical makeup day on set is hard to say, it all depends on the type of project. One day it could be a period piece, the next day a bloody zombie apocalypse! The one thing that is always constant is making sure the talent is comfortable, and the makeup design is positively contributing to the overall story and the director’s vision.

I love doing a full prosthetic makeup where I can have fun, be creative, and design a character from an initial concept to a full look. I’d love to have worked on the post-apocalyptic world of the Mad Max series, the character design and make-up in those films is always full of imagination and creativity. However, I also love detailed skin work as it can sometimes be so incredibly specific to the character you really feel like you are breathing life into the role. For example, for a wound on the face you must know what caused the injury and from what angle, how deep the cut was and how old it is. It’s like being a detective at a crime scene, except in reverse! It’s great fun.”

Mia Mullarkey has directed several documentary films about Irish social issues, from Mother and Baby homes to male mental health. Her latest film, There’s No Place Like Home, premieres at DIFF on February 22

“My parents always encouraged anything artistic in our home, so I did a lot of painting and piano playing and dancing. But I studied philosophy and psychology in university and seriously considered a PhD in psychology. It wasn’t until my mid twenties that I got into film, which felt like a perfect amalgamation of everything I loved and had studied so far.

The ratio of time spent creating to organising isn’t as exciting as it can look from the outside. I spend quite a bit of time emailing or applying for funds or planning logistics – computer time. It’s worth it, of course, once production is underway. Then I feel completely alive and inside the whirlwind of ideas and action.

I love people who are deeply kind in some way, who have have devoted their lives to others. That’s what drew me to the Mother & Baby Home story – a woman who spends years quietly researching to uncover one of our worst national atrocities, Catherine Corless. That’s what drew me to the Taxi Watch story – a man who came through serious depression and uses his taxi to rescue other young men from bridges at night, Derek Devoy. That becomes my starting point and then I find the characters who will tell the story.

I am always moved by people who have come through trauma and find the strength to share their experience. Growing up, we used to have family meetings when someone was really struggling, and it was a powerful way to reflect on yourself and not get stuck. I think film can do that on a large scale, act as a tool for reflection, and maybe that’s why I have chosen the topics I have.

In 2018, I won the Discovery Award at Dublin International Film Festival and from that I got talking with Grainne Humphreys and Sarah Ahern from the festival. They were initiating a pilot scheme with The Digital Hub, an artist residency and a six month filmmaking programme for teens called Screen8. So I signed up, partly for the great office space and partly for the experience of teaching a programme that ends with a festival quality film. It was a chance to revise my knowledge and pass it on.

Mia and her Screen8 students

We took on a complex and challenging topic for our short film – the housing crisis. I’m very proud of what we accomplished, a deeply emotive and fresh perspective on a major national issue. The openness of the students removes any sense of jadedness or desensitisation, and we ended up with a story that is clear and compelling, told from the students’ perspective. Our world premiere takes place at DIFF on February 22 and the students are high as kites about it.

In 2016 I attended a colloquium in Limerick on women in the industry and one of the speakers was Anna Serner, Director of the Swedish Film Institute. She has successfully implemented a 50/50 gender funding policy in Sweden and Screen Ireland (previously the Irish Film Board) are following suit. I’m delighted this initiative is happening because we have a country of brilliant storytellers, but the statistics are terrible when it comes to female voices getting out there. My experience of the Irish industry has been very positive, we’re tiny compared to other countries but you get out what you put in. There is a push across all the arts in Ireland to create more gender balance and I’m delighted about that.”