After four years of dating, Joanna Cooper and Conor Murray announced their engagement earlier this year, with Conor getting down on one knee in Dubai.

While on holidays in March, the pair celebrated their happy news among friends, with Joanna captioning a shot of Conor at the time with “always and forever”.

And although the pair have not revealed a wedding date or location as of yet, it’s certainly full steam ahead with the planning, as Joanna has admitted that she’s found her dream wedding dress.

During a recent Instagram Q&A, the 28-year-old model revealed that the dress has been chosen, but is yet to give away too many details.

In a recent snap, Joanna also gave fans a closer look at her sparkling engagement ring, chatting about her fresh manicure it’s safe to say that all eyes were on the rock instead. 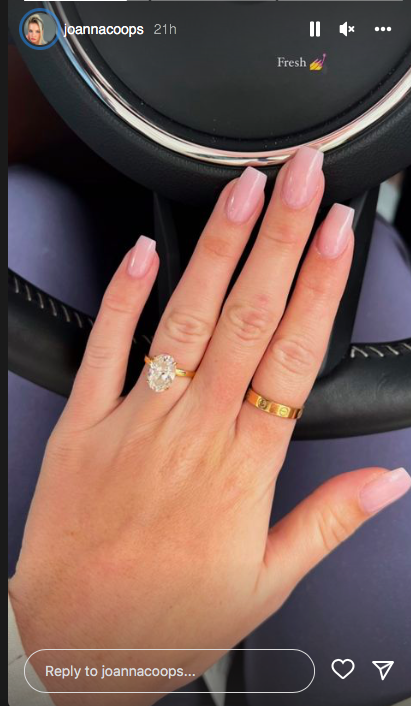 Now living in Limerick, having moved in together during the pandemic, it’s believed the pair will continue residing in the city, close to Conor’s rugby base. Joanna was previously living in London for her modelling career, but moved in with Conor when the lockdown hit and work dried up. The Derry native now travels a lot between Limerick, Dublin and the UK for work, having recently also travelled to Paris for a fun influencer event with designer brand Viktor&Rolf.

We for one cannot wait to hear more deets on the wedding prepping, as well as where the pair will tie the knot. As they love to travel it’s very possible the celeb duo could jet off overseas for the nuptials, but their equal love for Adare, Co Limerick makes us think they could have their sights set on the luxurious five star Adare Manor.

Only time will tell!