Everybody is totally in love with Travis Barker and Kourtney Kardashian as a couple. Well, everyone except Travis’ ex Shanna Moakler. Since the couple got together, Shanna has made her opinion clear, and she isn’t happy about their relationship.

The latest drama comes following an Instagram Story from Shanna that fans believe is aimed at Kourtney and Travis.

So it starts on Halloween, Kourt and Travis dress up as Alabama Whitman and Clarence Worley from the film True Romance.

The former Playboy model and Miss USA then took to her Instagram Story to share a photo of her parents cuddling and wrote “TRUE ROMANCE” over it.

In the background of the photo, she played “You’re So Cool” by Hans Zimmer, which is the theme song of the True Romance film. 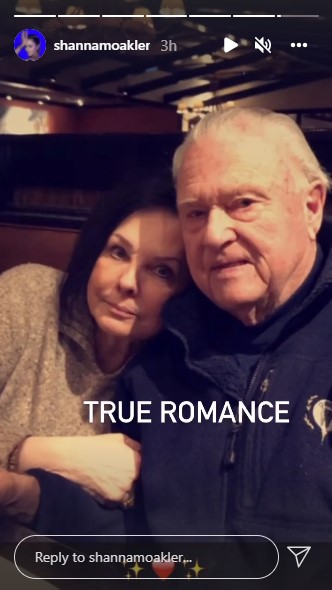 Shanna has previously discussed how important of a film True Romance was for her and Travis’ relationship and her discomfort with Kourtney and Travis bonding over the film.

After Kourtney posted a snap of her and Travis enjoying True Romance back in May, Shanna told US Weekly:

“What was weird is that they were posting about a movie (True Romance) that Travis and I basically bonded over.

This isn’t the first time Shanna has  Kravis.

Upon the couple’s engagement announcement, Shanna went straight to Instagram to reveal she was “temporarily closed for spiritual maintenance.”

In May, Shanna also accused Kourtney’s sister, Kim Kardashian, of having an affair with Travis sometime before 2007. She revealed to US Weekly, “I divorced my ex because I saw them (Kim and Travis)— I caught them having an affair.”

Around the same time, Shanna also spoke about how Kourtney and Travis’ relationship impacted Shanna’s relationship with her kids.

Speaking about the Kardashian family, she said, “They’re going on lavish trips. They’re doing all these things, which is fine. I think it’s nice that they’re being kind to my kids. I want that for my children. I don’t think it’s great when they put a wedge in between their biological mother.”

Shanna and Travis were married from 2004 to 2008. They share son Landon, 17, and daughter Alabama, 15. During that time they had a reality show named Meet the Barkers. They briefly reconciled in 2009 but split again shortly after.