Not gonna lie, Little Mix’s Jesy Nelson and Love Island star Chris Hughes are one of our favourite celebrity couples around at the moment.

This was solidified this morning when Chris got emotional while praising his girlfriend for making her recent documentary about online bullying.

In the film, Jesy opened up about the relentless trolling she’s been subjected to since Little Mix won The X Factor in 2011, revealing that at one point, she attempted to take her own life.

Appearing on This Morning earlier today, Chris got emotional speaking about Jesy’s bravery. 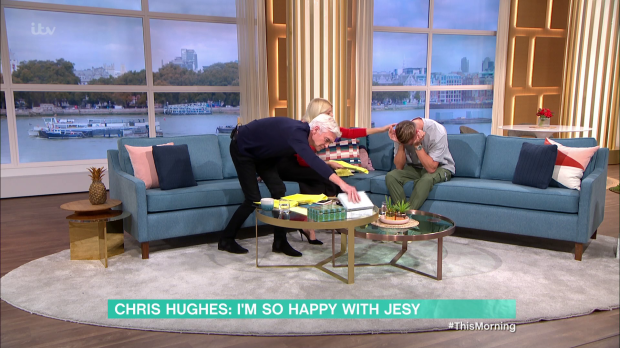 “She rang me a few minutes after the documentary aired and she was just so overwhelmed, she just broke down on the phone to me, she’s a strong girl now…” he said, trailing off as he put his head in his hands.

I get emotional every time I speak about it. I struggle talking about it. I’m alright talking about myself but when I talk about anyone else I’m a mess. She’s so brave, so strong, she didn’t deserve any of that.

Chris was on the show to raise awareness about Movember, discussing how he saved his brother Ben’s life earlier this year when he had his testicles examined live on This Morning.

Inspired by Chris, Ben decided to check himself later that evening and discovered a lump – he was diagnosed with testicular cancer, but is now in recovery.

I’ll carry ya heels for a lifetime 🖤

“It was quite a sizeable lump, so the cancer was quite big… but he’s on the mend, he’s got a prosthetic in now so he’s got two testicles, one fake on the left side that he’s very happy with,” Chris said.

The Hughes brothers will open up about their fertility worries in an upcoming documentary for the BBC, set to air early next year.

“Fertility is often a subject that guys don’t consider until it might be too late,” said Chris. “I’m hoping this documentary will raise awareness and help men who might be struggling with these issues.”

20 *Really* Niche Things We Bet You Didn't Know About The Karda...

'The Ick Epidemic': Why Does It Happen And Can You Overcome It?

The Confirmation We've Been Waiting For? You Need To Watch This...