Trending 15th May 2022 by Slaine McKenna

So this never came up in the reunion show!

Chrishell Stause and G-Flip are the latest celebrity couple to take the internet by storm. With everyone obsessing over the pair since Chrishell confirmed the romance at the Selling Sunset season five reunion. But it seems we didn’t get the whole story about the relationship during the special episode.

During the reunion Chrishell explained their romance “started because (she) was going to be in their video.” Which led fans to believe that was how the pair met.

But it turns out Chrishell and G-Flip were actually introduced long before…when they were both in relationships.

G-Flip was chatting on the PEOPLE Every Day podcast, and revealed they met Chrishell last year when the Selling Sunset star was in the midst of a highly publicised relationship with her co-star and boss Jason Oppenheim. Saying; “We met last year at Halloween,”

“We were both with our ex-partners then … And then, we obviously separated from our partners, and we just started talking and stuff” 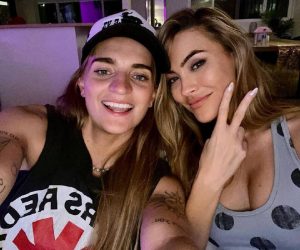 The rapper also shared what they initially connected over. Confessing, “We just found a lot of similarities, even though people would think we are from like different corners of the world. We find ourselves so similar sometimes.”

So while they met last year, it was the “Get Me Outta Here” music video that sparked the couple’s romantic connection.

The pair had an amazing time filming and caught feels for each other on set. As G-Flip confessed, “it was really easy and fun on the film (set), you know, fun and breezy and easy. So it was great to make that clip.”

They also shared just how much passion went into the project. Explaining, “we watched it so many times before we actually put it out. We went through so many edits of it, but it’s cool. It’s out in the world now. ”

Chrishell confirmed their romance after plenty of internet speculation. Saying at the reunion, “You don’t get to choose when you meet someone in their life. Recently I met someone who is in a different place in their life as well…”

“I’ve been spending a lot of time with someone who is very important to me, they’re called G Flip, they’re non-binary so they go by they/them,” she explained.

“They’re an extremely talented musician and it all started because I was going to be in their video.”

The two had been spotted on multiple dates around Chrishell’s stomping ground of Los Angeles, so rumours of a romance have been swirling before they confirmed anything.

One of those dates included a premiere for season two of Bridgerton. And, what’s more than that the pair sent the rumour mill into overdrive when they posted a selfie together on Instagram not so long ago before the official confirmation.