Chrishell Strause Slams Troll Who Criticised Her Capabilities ‘Without A Man’

Let's just say she did NOT hold back...

Selling Sunset’s Chrishell Strause has taken to Instagram to slam a troll who basically criticised her capabilities as an estate agent, claiming her success is down to her partner Jason Oppenheim. But let’s just say Chrishell was having none of this, as she shared the screenshot to her Instagram Stories.

In the screenshot, the person wrote to Chrishell to say that she “can’t accomplish anything without a man” before adding “the only reason you’re getting listings and selling them is because of Jason.”

They then also brand her a “fake” and “miserable b*tch” and claimed that Jason had helped Chrishell buy her first home – the one we saw in the most recent season of Selling Sunset.

Writing over the DM, Chrishell shared: “It would seem I am not the miserable one here. 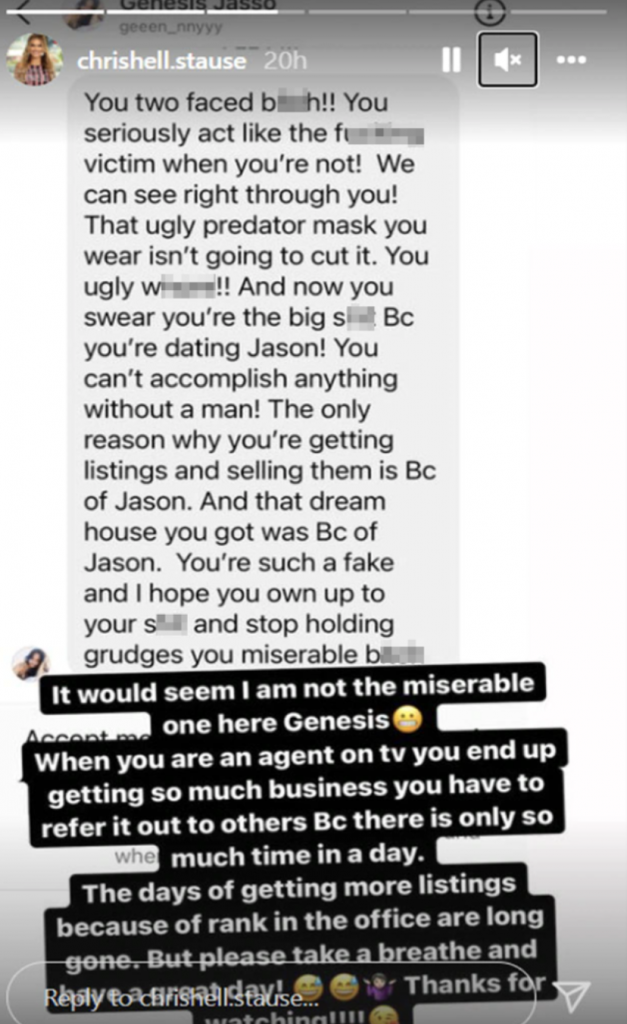 “When you are an agent on TV you end up getting so much business you have to refer it out to others [because] there is only so much time in a day. The days of getting more listings because of rank in the office are long gone.”

Before adding: “But please take a breathe [sic] and have a great day! Thanks for watching!!!!”

Afterwards, Chrishell thanked her followers for their support, saying: “You guys just flooded my DMs with the nicest messages, and I wasn’t posting it for that.

“It just kind of gave me a laugh. But I really do appreciate it. You guys are just so kind and sweet and I know there are way more of you than the trolls. Thank you!”

The story of how Oppenheim boss Jason and real-estate agent Chrishell came to be wasn’t covered in the latest season of the show. Despite their apparent blossoming relationship we see on social media, their romance seems to be strictly behind the scenes only, with Jason explaining why:

“I think when [a relationship is] public, it puts a lot of just added pressures and publicity and opinion,” he told US Weekly.

Sharing that the decision to keep things quiet was mostly Chrishell’s, he continued:

“I think it’s nice to kind of start a relationship in the way that normal relationships kind of grow and progress. And that’s just between two people.”