Why didn't Lady Whistledown bring this up? 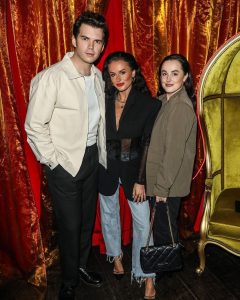 Bridgerton and Love Island are hands down the most popular shows of the last few years. With Netflix’s period drama, Bridgerton, smashing streaming records all around, and Love Island being the most hotly anticipated reality show every summer.

Which makes it all the more shocking that they actually share a major connection and we didn’t know!

It all started with Britain’s Got Talent…thought this was about Bridgerton and Love Island? It is, but stick with us for a second. Last night’s show had a performance by musical theatre group, Welsh of the West End.

And spotted in the audience, cheering them on, was Bridgerton’s Luke Newton. Now, is Luke just a massive BGT fan?…it’s entirely possible. But we imagine it helps that his girlfriend is actually a member of Welsh of the West End.

So it turns out Luke has coupled up with Jade Davies, who was performing on the talent show.

Naturally fans thought his reaction was adorable and loved the surprise at seeing him in the audience supporting his GF. But they also noticed Luke wasn’t the only familiar face in the clip.

Standing beside him was Love Island’s 2017 champion Amber Davies…and oh we’re getting it now.

Jade and Amber are actually sisters!

So will we be seeing Lord Colin Bridgerton enter the villa to give this year’s Islanders some courtship advise? Or could Amber join up as a columnist for Lady Whistledown? Well…never say never, but it’s a lot more likely that we’ll get some occasional cute double date snaps.

Luke and Jade have been together for three years, and are a perfect love match as the share a love of acting, music and travel.