Insta Creep: Britney Spears Did A Bit Of Shopping In Swords After Her Gig On Monday…

You’d think that a megastar like Britney Spears wouldn’t be just wandering around Swords, but you’d be incorrect.

Fresh from playing a sold-out gig at the 3Arena on Monday night, Brit Brit was spotted shopping in River Island and H&M in the Pavilions yesterday:

Britney Spears was spotted in swords in Ireland shopping in h&m at the pavilions shopping centre before heading to the airport about 2hrs ago?? #pieceofmetour #BritneyDublin pic.twitter.com/vgR3mTetzq

According to one staff member, she rounded off her Irish shopping centre experience with a visit to Chopped and Butler’s Chocolates. The best thing to happen to Swords since JCs, maybe.

Kendall Jenner is in shite for saying some suuuuper privileged stuff about being a model.

Kendall, as we all know, got into to the biz on the grafting of mama Kris Jenner (and the handy fact that she’s a member of one of the most famous families in the world). So no one was too impressed when she told Love magazine that she’s always been ‘super selective’ about the shows she’d do:

I was never one of those girls who would do like 30 shows a season or whatever the fuck those girls do. More power to ‘em. But I had a million jobs, not only catwalks but everything else. 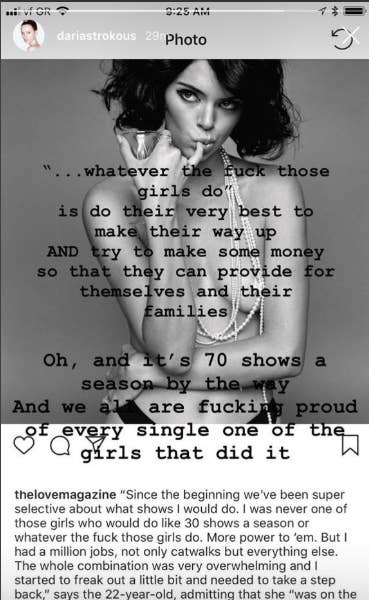 “…Whatever the f**k these girls do is do their very best to make their way up AND try to make some money so they can provide for themselves and their families,” the model wrote.

Luma Grothe, who walked with Kendall in the 2016 Victoria’s Secret Fashion Show, said:

When I started in this industry I was pretty much starving for the first three years. Working every single day for free. Waiting for the day someone would notice my hard work and give me the chance to do ONE show! I couldn’t even go back home for Christmas because I was absolutely broke. I had to work so hard for people to even remember my name!

Kendall has since walked back on the comments, tweeting that she has seen “first hand” the work so many less well-connected models have to do to stay on top:

I get to experience first hand their tireless commitment, their work ethic, the endless days, the lack of sleep, separation from family and friends, stress of traveling, the toll on physical and mental health, yet they still make it all look effortless and beautiful.

I’m inspired by so many of these people i have had the good fortune to work alongside! There’s no way i could EVER hate on that ❤️ i want everyone to win. SLAY ALWAYS.

Meanwhile, sister Kim Kardashian seems intent on bringing back the whale tail (AKA the visible thong).

This isn’t just any thong, as you may well imagine – it’s a vintage Tom Ford-era Gucci bikini, don’t you know. We can’t go down this uncomfortable road again! Is there any way to stop this trend now she’s set it off again?

And finally, rapper Post Malone is saying ‘f**k you’ to anyone who wished him death after his plane had to make an emergency landing yesterday.

Post was bound for London when two of the tyres on his private jet exploded during takeoff, forcing them to make an emergency landing. Apparently, he saw some people tweeting that they hoped he would die during the incident, and seriously, who DOES THAT? Anyway he’s grand:

i landed guys. thank you for your prayers. can't believe how many people wished death on me on this website. fuck you. but not today

As our mammies would say, don’t MIND them, Posty.