I’ve worked my ASS off this week ?? I’m actually so so excited to show you what I’ve achieved this week …. It’s been such a positive week ❤️❤️ #hardworkpaysoffs #focusedlikeamofo

Gemma Collins fell flat on her face during her routine on Dancing On Ice last night – she got back up and carried on with a smile, but it looks like it really hurt.

Near the end of her performance to Celine Dion’s It’s All Coming Back To Me, Gemma went on her snot:

It's the most talked about moment of #DancingOnIce so far!@missgemcollins may have fallen but she got straight back up and carried on ?? pic.twitter.com/hZ8labHqRR

She was given a score of 16.5, putting her at the bottom of the leaderboard, and remained unusually quiet during the judge’s critiques.

Boyfriend James ‘Arg’ Argent supplied her with curry and brandy post-fall, but the swelling cannot be denied:

“Gemma’s leg is terrible, look. Her knees are in a bad, bad way,” he said on his Instagram Story. “There’s bruising there. This one isn’t so bad, that one I’m worried about.”

Ever the supportive boyfriend, though, he tweeted in support of her hard work this week:

I LOVE YOU @missgemcollins ?
When I saw her fall like that face first I honestly thought she might be unconscious or lost some teeth! The way she got up & carried on was AMAZING!!! ❤️ You worked so hard this week & improved so much! ⛸@themattevers @dancingonice @itv #Reality? pic.twitter.com/KkCCCpkW9n

These two. Get well soon, Gemma!

Meanwhile, on this side of the pond, Holly Carpenter became the second to be eliminated from Dancing With The Stars.

Holly danced the foxtrot to Beauty And The Beast with partner Trent Whiddon, and received 16 points from the judges – this landed her in the bottom three with Fred Cooke and Cliona Hagan, before it was revealed she was voted out.

She was not impressed with the news, that’s for sure.

Commenting on a few tweets about her ‘death stare’, she said:

Thank you SO much to everyone who supported me on my short but sweet @DWTSIRL journey ❤️ absolutely gutted to be leaving the show but I’ve had a ball & met the most incredible people ❤️ ..I’ve seen a few Tweets about my facial expression ? I was just sad k ??? #deathstare

“I’m heartbroken but someone had to go and sadly it was me,” she wrote on Instagram. “Thank you so much to everyone who voted and supported me on this journey which has unfortunately been cut short.”

The drama between Ferne McCann and Love Island’s Adam and Zara is getting even more nasty, if you can believe that.

Ferne was accused of throwing a drink/glass at Adam at the National Television Awards last week (there’s a recap of that business here) – over the weekend, she posted a statement accusing Adam of “serious abuse and intimidation”:

Jaysus. Zara replied via Insta Stories once more, saying Adam was standing up for her because she was being “intimidated”.

He told her to stop being a bully, that she is a mother and should know better… fair, right? He never said anything about her daughter at all… Lying gets you nowhere in life!

“My partner would NEVER in a million years verbally abuse someone’s child… I am seriously offended by this allegation,” she continued. Meanwhile, Adam tweeted and deleted something about releasing CCTV footage of the incident: 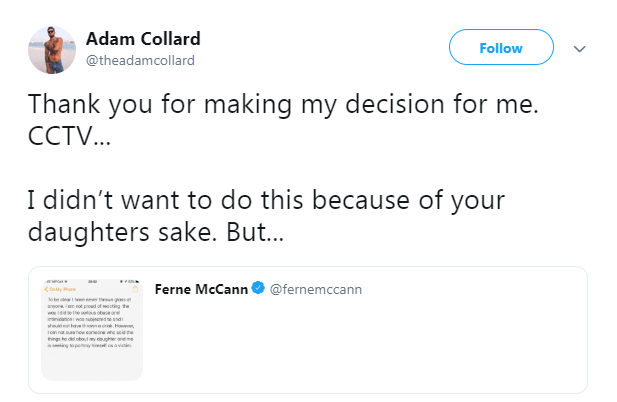 Mondays are fun for us Willoughby Watchers because we can take in what she wore on Dancing On Ice AND This Morning. Today she’s sporting a little pinny from Warehouse (get it for €64) and the fans are satisfied, but calling for a new pose. Leave her! She’s found the one that works!

Last night’s Dancing On Ice dress is a complete stunner – simple but effective, and we can all agree on that.