Insta Creep: Gwyneth Paltrow And Dakota Johnson Are Hanging Out – Without Chris Martin…

Gwyneth and Chris have been almost too good at getting on with things after their split – Goop says she now thinks of her former husband ‘as a brother’ and often hangs out with her and her new husband, Brad Falchuk.

Gwyn has returned the favour and made friends with Dakota, who Chris has been dating since late 2017:

Cosy cosy! Gwyneth and Dakota came together to celebrate the birthday of their mutual friend, journalist and professional celebrity mate Derek Blasberg. It doesn’t seem like Chris was there, which makes their cuddly photos even more interesting. We love seeing everybody just get along!

I felt so spoiled by all of the birthday sweetness, thank you. ♥️ I celebrated by making myself this lovely bead necklace. #47wasarager??? #classtrip #chaperonelife #ashowerisinmyfuture

Jennifer Garner looked back on her time making the movie with a sweet Instagram post, celebrating all the young actresses who performed alongside her. (If you don’t follow Jennifer on Instagram you are MISSING OUT.)

Fifteen years ago today #13GoingOn30 made her debut, directed with ❤️ by our beloved Gary Winick ? and a clutch of loving, hardcore producers (3 brilliant women—before it was cool to be led by women!) . The movie benefitted from the performances of so many young actresses. Open and twinkly-magical then— now, 15 years later, they are ruling the world. (Hi #SixChicks—@brielarson, @ashleybenson, @christabrittany—who also played a young me in Ghosts of Girlfriends Past—and my own sweet @revjuliaroth). . I loved my day with this slumber party crew: they danced with abandon and reminded me of the power of just saying yes—to being in a group, to vulnerability, to wearing a bra over your clothes. At the last minute I tossed my adopted LA family member Maddy Sprung-Keyser into the scene. @maddsk went on to be an Academic All American swimmer at Amherst, got her law degree from NYU, and is producing podcasts for @pineapple.fm. Looking back into her adolescence—with the hair and the men not wanting to jump her bones—is extra special today. Imagine if every 13 year old girl had an opportunity to dance and feel beautiful like the girls in this film. I am proud of all of you. ❤️ . I feel so, so lucky to have had the experience of making this joyful movie. And even luckier to be part of something that, all of these years later, can still make people (hi, @arianagrande ?) smile. ?

Speaking about the day they shot the cute slumber party scene, she said:

I loved my day with this slumber party crew: they danced with abandon and reminded me of the power of just saying yes—to being in a group, to vulnerability, to wearing a bra over your clothes… Imagine if every 13 year old girl had an opportunity to dance and feel beautiful like the girls in this film. I am proud of all of you.

“I feel so, so lucky to have had the experience of making this joyful movie,” she continued. “And even luckier to be part of something that, all of these years later, can still make people (hi, Ariana Grande) smile.”

She is of course referring to Ariana’s tribute to the film in her video for Thank U, Next. How sweet. 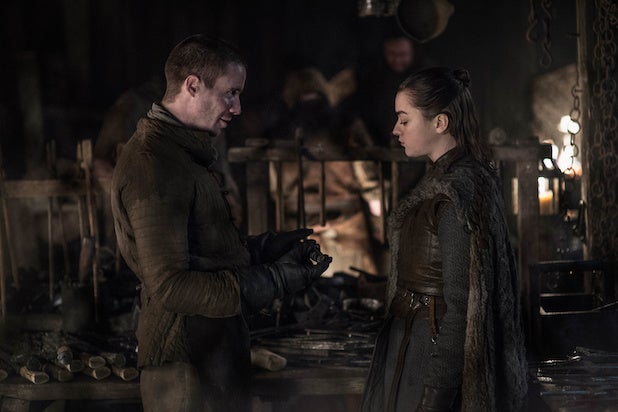 Thought YOU felt uncomfortable watching that sex scene in the newest Game of Thrones? Please, spare a thought for the actress.

We’ll throw a spoiler warning here, but listen, if you haven’t seen it by now… it’s on you.

will remember last night for the rest of my life. i am beaming. ? *update* shoutout to my pinkie in the third pic ?

There were a lot of mixed feelings around Arya Stark’s seduction of Gendry in Sunday night’s instalment, mostly because Maisie Williams has been playing her since she was a literal kid of 12 or 13. Arya is now 18 in the series, and Maisie herself is 22, but still… weird.

No one is feeling that more than Maisie herself, it seems – and she’s concerned about her family’s reaction:

Arrrghhh. Best of luck at the next family dinner, Maisie.

She’s back from her holidays! And wearing a succession of floaty, pink things. Her comeback dress, the above pink midi from Markus Lupfer, went down a treat with her always-critical fanbase… except for the £400 price tag of course. Didn’t stop it instantly selling out though.

This morning, she’s back to business in her usual uniform of a jumper and midi skirt – the pattern calls to mind a picnic blanket, but she’s working it. Oh god, have we become as bad as her commenters with that quip? Hope not.