Meghan Markle’s best pal has seemingly responded to she and Harry’s big announcement by posting a knowing quote on Instagram.

Meghan has been friends with stylist Jessica Mulroney since her Suits days, and Jessica’s children were involved in Meghan’s wedding.

Jessica has been known to use her social media to comment on royal goings-on – she previously called out the ‘racist bullies’ criticising Meghan – and yesterday, shared this quote:

“A strong woman looks a challenge in the eye and gives it a wink.”

The comments of the post have been turned off, but the reason for the post seems pretty clear. Meghan has some good friends in her corner, TG.

Beyoncé and Jay Z sent Reese Witherspoon a case of their champagne after the Golden Globes.

The ceremony was sponsored by Moet, but Jay Z owns shares in Armand de Brignac, so Bey and Jay brought a few bottles of that rather than be papped drinking a rival brand.

Jennifer Aniston spilled on Instagram that when The Morning Show table ran out of water, Reese marched up to Bey and Jay and requested that they share the wealth: 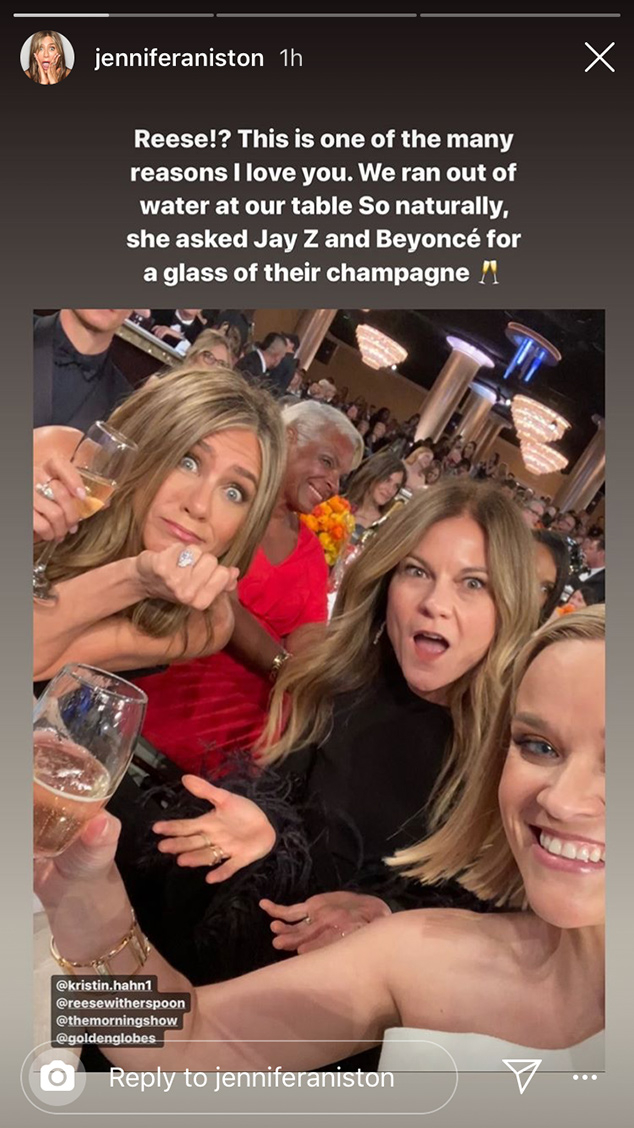 The couple were obviously tickled by the whole interaction, because yesterday they had a case of Armand de Brignac delivered to Reese’s home – along with a note that read “More water.” LOL.

Reese proceeded to crack open a bottle to try with her mam Betty at 11.30am, which is exactly what we’d do in her position:

Legends only. Perhaps this is the start of a beautiful friendship?

Here is a story confirming that Harry Styles is a good chap.

Earlier this week, a tweet asking people to share their “most awkward or interesting celebrity interaction” went viral, and while many of the answers were great, one in particular stands out.

Journalist Rory Carroll said that Harry Styles watched his dog while he ran in to collect food from a restaurant in LA:

I was outside a restaurant in Hollywood trying to pick up my take out order but couldn’t go in because I was with my puppy. Harry Styles saw my predicament, tapped me on the shoulder and said he could watch Oscar while I went in. What a guy pic.twitter.com/B5bQ7PQYdI

Speaking to BuzzFeed, Rory said that he was worrying about what he’d do with his six-month-old puppy while he was in the restaurant when someone with an English accent tapped him on the shoulder and offered to watch the dog. That someone was Harry Styles.

Rory can confirm that Harry is a great puppy-sitter and everything went off without a hitch. What would you do if Harry Styles offered to watch your pet? Faint clean away, probably.

There’s so much to love about this picture. The waistcoats. Kourtney’s sharp bob. Khloe’s kurls. And how North is so completely Kim’s double it’s SCARY.