Is this Jessie J making her relationship with Channing Tatum #InstagramOfficial? Lots of people think so.

The singer was at opening night of Magic Mike Live in London on Saturday night, and congratulated her rumoured beau on a job well done: 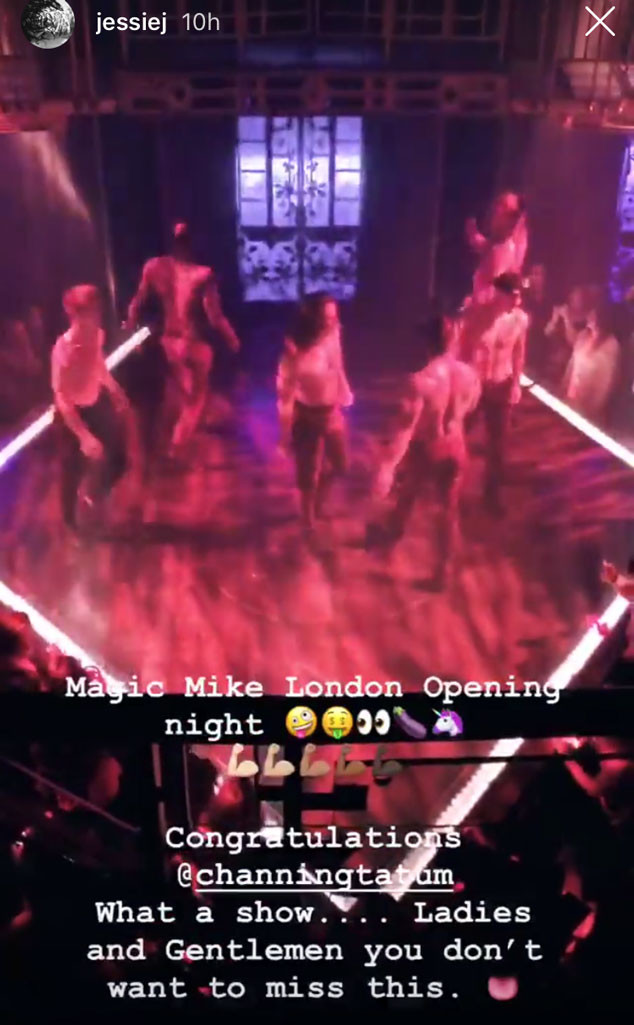 INNNTERESTING. Fans previously uncovered a few hints they’d been dropping about their relationship on social media, from Channing lurking in the background of Jessie’s Instagram Lives to people spotting them playing mini golf together.

Prepare for the loved-up posts to start any day now…

Victoria Secret Show tonight with these two legends!!! @giancarlogiammetti @realmrvalentino #giancarlo #Valentino !!!! Love you both so much!!! ❤️❤️❤️

Well they actually managed to say hi to her in the end:

Meeting this woman deserves a separate post on its own! ?????? The ultimate momager @krisjenner ?? #queen #vsfashionshow

Chilling with the QUEEN at the @victoriassecret fashion show last night ? Two photos for the mantlepiece, that photobomb has made my life ??? #krisjenner #vsfs2018 #vsfashionshow

Do you think Kris had any clue what was going on? Not a notion, we’d wager. #SecureTheMomager

Returned to my house in Malibu after evacuating. Heartbreaking time across California. Inspired as ever by the courage, spirit and sacrifice of firefighters. Thank you @LosAngelesFireDepartment. If you can, support these brave men and women at SupportLAFD.org. Link in bio.

Gerard Butler was one of the many people forced to evacuate their homes during the California wildfires – he returned home to find part of it had been destroyed.

The actor shared a photo of the remains of his truck and house, which were completely gutted by the flames.

“Heartbreaking time across California,” he wrote, commending the “courage, spirit and sacrifice” of the firefighters tending to the blaze and encouraging people to donate to the cause.

Miley Cyrus also revealed that her house “no longer stands” but she made it out with her pets and boyfriend Liam Hemsworth:

Real Housewife Camille Grammer also shared that her home had been lost, but that firefighters had saved her cars and some personal items.

Sadly my house couldn’t be saved. The courageous firefighters were able to save my cars and personal items recovered from my home. I thanked the fire chief and his team of firemen for all of their hard work. He took the time to explain what happened and I’m grateful for all of their hard work trying to save my home. Sad we lost our home but grateful that my family is safe. Luckily we quickly evacuated our house yesterday after a patrol car drove up the street announcing mandatory evacuations. I’m grateful for my lovely neighbors and friends who kept me informed and for their help this evening. ? Thank you all for caring ? #woolseyfire #malibu. Special thanks to Fire Chief Rash and his brave team of firefighters. ?

There she is now in the first official photo of the new I’m A Celebrity presenting team, and not the weird Photoshopped one we got earlier this year. The first outfit is very on theme, but we absolutely will not be happy unless she does full Indiana Jones cosplay at some point.