Kylie Jenner is being criticised for trying to ‘upstage’ Hailey Bieber at her own wedding.

Now, we’re not saying we were DISGUSTED by the gold dress she wore to the ceremony, but it was certainly very… out there… for someone else’s wedding:

Naturally, people are like, “Kylie, please, time and place”:

For reference, this is what Kendall wore:

IN FAIRNESS to Kylie, this is exactly the behaviour we’d expect from someone who’s just broken up with their baby daddy. She’s in full ‘show him what he’s missing’ mode. We have to deal with it.

Beauty influencer Amrezy is bravely taking a stand on behalf of her job.

Amra Olević Reyes, who has garnered 5.8m followers for her Kardashian-esque beauty looks, called out people who “discredit influencers” in a tweet last Friday:

The only people that discredit influencers are those that tried it and didn’t succeed. Don’t throw stones now just cause you didn’t pop 🤷🏻‍♀️

She then listed the ‘many jobs’ being an influencer is made up of, from stylist to makeup artist to photographer:

An influencer is a hybrid of many jobs. A stylist, makeup artist, hair stylist, photographer, editor, creative director. And y’all still saying it isn’t legitimate? FOH lol. Not many can do it & stay consistent. Ion wanna hear no influencer slander again.

While many people agreed with her that influencing is a difficult job, others weren’t so sure, saying that many careers can be broken down in this way (a dementia care assistant, for example, replied saying she has to be a hairdresser, waitress, cleaner, friend…):

never get these tweets, you could break any job into different components (‘hair stylist’? we all have to do our hair whether an influencer or not!). As someone who blogs myself, I never get why were so desperate to prove how hard we have it! It’s hard but many have it harder https://t.co/tDseFtWP92

Will we ever agree on influencers? It’s starting to appear that we won’t.

While I was over there I fell in love with this little beauty at the Shalva National Center. What an amazing center for children with special needs 💗

Meanwhile, Demi Lovato has been criticised for going on a sponsored trip to Israel.

Earlier this week, the singer shared some photos from her visit, explaining that she “was raised Christian and has Jewish ancestors” so was excited to see the places she’d “read about in the Bible growing up”.

“There is something absolutely magical about Israel… Spirituality is so important to me,” she writes. “To be baptised in the Jordan river – the same place Jesus was baptised – I’ve never felt more renewed in my life.”

I am an American singer. I was raised Christian and have Jewish ancestors. When I was offered an amazing opportunity to visit the places I’d read about in the Bible growing up, I said yes. There is something absolutely magical about Israel.  I’ve never felt such a sense of spirituality or connection to God…something I’ve been missing for a few years now.  Spirituality is so important to me…to be baptized in the Jordan river – the same place Jesus was baptized – I’ve never felt more renewed in my life. This trip has been so important for my well-being, my heart, and my soul.  I’m grateful for the memories made and the opportunity to be able to fill the God-sized hole in my heart. Thank you for having me, Israel 💗

Some fans have criticised Demi for not mentioning the long-standing conflict between Israel and Palestine in any of her posts, with a few even accusing her of promoting or supporting Israel.

People were further incensed by the fact that Demi turned off comments on all her posts about the trip, stopping them from sharing their thoughts.

However, Demi later released a statement about the matter on her Story: 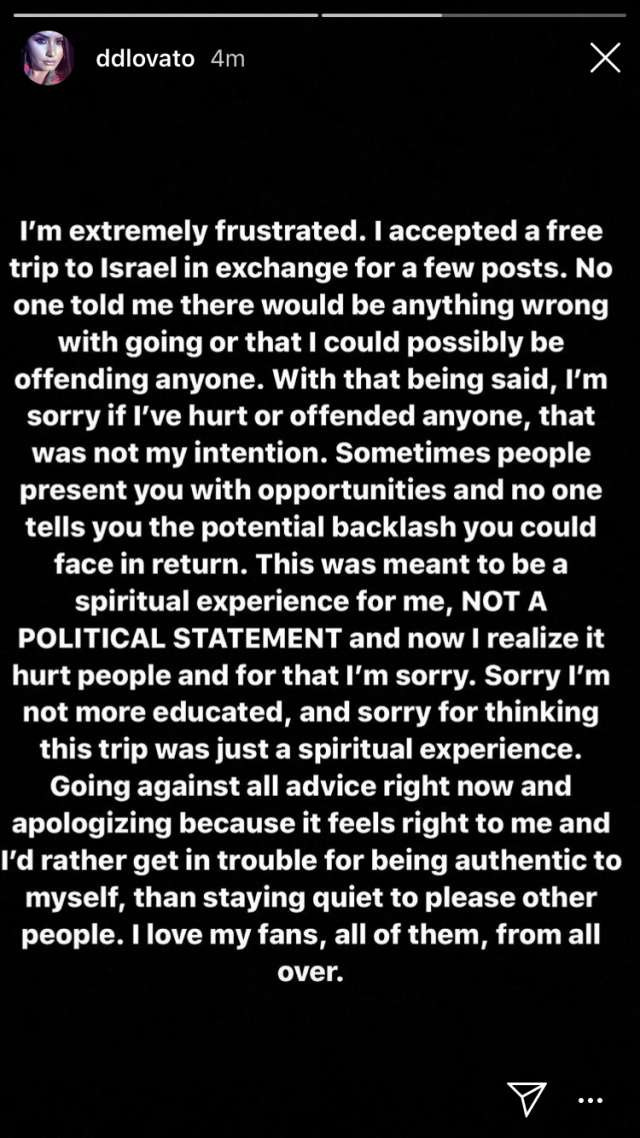 “I accepted a free trip to Israel in exchange for a few posts. No one told me there would be anything wrong with going or that I could possibly be offending anyone,” she wrote.

With that being said, I’m sorry if I’ve hurt or offended anyone, that was not my intention… This was meant to be a spiritual experience for me, NOT A POLITICAL STATEMENT and now I realise it hurt people and for that I’m sorry.

“Going against all advice right now and apologising because it feels right to me and I’d rather get in trouble for being authentic to myself than staying quiet to please other people.”

Yes, there is a second #WilloughbyWatch this week because we heard that Holly caused OUTRAGE (or something close to it) with the dress she wore yesterday. We were expecting something legitimately heinous but it’s just a collared midi? What has a collared midi ever done to anyone?

“Frumpy and shapeless… it drains you,” says one fashionista. “Oh no it’s like a granny’s dress,” comments another. “That is truly awful omg,” one person was compelled to write.

We’re gonna start leaving similar comments on their outfit pics. See how they like it.

PSA Gals, Zara Set To Launch A Beauty Collection Online Next We...

POP Of Colour: Where To Get Jeans Inspired By Dominique Nugent'...

Roz Purcell Shares Some 'Good News' After Breaking Her Leg In F...

Engagement Talks? It Looks Like Kourtney Kardashian And Travis ...

Bank Holiday weekends are great until you remember