Here's why people think so!

2022 has had some seriously high profile weddings with the likes of Kourtney Kardashian and Travis Barker, Nicola Peltz Beckham and Brooklyn Peltz Beckham, along with Britney Spears and Sam Asghari, all tying the knot in star studded ceremonies.

But it seems another A-list couple has taken a different approach, as it looks like Rita Ora and Taika Waititi may have secretly said “I do.”

Rumours of an engagement have been swirling for quite a while, but it’s Rita’s latest IG story that has people speculating the couple are married. 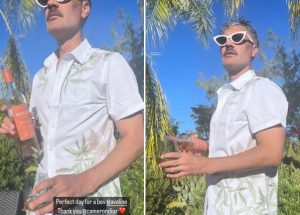 Rita, Taika, and her sister, Elena, were enjoying their day in a sunshine, having a few drinks together.

Both girls shared some snaps of Taika as they partied, and fans noticed he was was wearing, what’s believed to be, a wedding ring in Elena’s photo.

But Rita had covered his hand in her pic, with something thinking she was trying to hide the ring.

The theory does fit with reports that the couple were going to have a small intimate ceremony when they tied the knot.

With a source telling the Sun back in June, “This isn’t about them doing a big showy thing and crowing about it beforehand.”

“It’s just about them being in love and deciding the time is right to formalise their relationship. They couldn’t be happier.”

Rita and Taika started seeing each other last year, after working together in Australia. But the couple had known each other much longer than that, being friends for years.