So we all know about Kim Kardashian’s Marilyn Monroe moment at the Met Gala this year. Unless you’ve been living under a rock, you’ve probably been bombarded with hot takes about her look- with some loving Kim’s homage to the Hollywood starlet, and others hating it. But regardless of where your opinion falls, admittedly it was an iconic move.

Actually more iconic than any of us thought possible as it turns out Kim wore not one, but two of Marilyn’s notable gowns.

The SKIMS founder revealed on Instagram that after walking the steps of the Met in the ‘Happy Birthday Mr President’ dress, she changed into Marilyn’s Norman Norell dress, which the starlet wore to the Golden Globes in 1962.  And for an accessory, Kim actually had Marilyn’s 1962 Golden Globe.

Writing on IG, “To top off my night after The Met, I had the honor of changing into Marilyn Monroe’s Norman Norell dress that she wore to the Golden Globes in 1962 —where she received the Henrietta Award For World Film Favorite.” 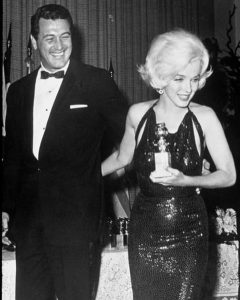 Explaining that her second look actually came together by fate. Kim shared, “In my quest to find the Jean Louis hand beaded dress that I wore to the gala, I discovered Heritage Auctions owned Marilyn’s iconic green sequined gown.”

“Further into my research I found out that the owner of the Golden Globe that she received that evening was none other than my friend Jeff Leatham. I saw this all as a sign the way that all of the stars aligned.”

It was literally destined to be!

The reality star also shared what an honour it was, to be able to wear these gowns. Writing, “It will forever be one of the greatest privileges of my life to be able to channel my inner Marilyn in this way, on such a special night.”

So while her second look came together by fate, her first one actually took a bit of organising, and the help of Athlone man Martin Nolan.

Martin, who is the co-owner of Julien’s Auctions in Los Angeles, told the Irish Independent about organising the look, revealing it was Kim who reached out to him.

Saying; “It was Kim Kardashian’s bright idea to try and wear Marilyn Monroe’s iconic dress to this year’s Met Gala.”

“And she contacted us as we are the company that sold the dress for $4.81m in 2016. We contacted Ripley’s, who bought the dress and reassured them that Kim would be extra careful.”

Martin gushed over what a brilliant idea it was for Kim to wear the dress. Explaining; “I think Kim’s choice was brilliant because it was a celebration of American fashion and she worked really hard to make sure that she could fit into that dress and wear it like she did.”