It’s been a busy few weeks for Little Mix fans! With our hearts breaking as they performed their last show together, then putting the pieces back together when Perrie announced her engagement and rumours that Leigh-Anne was getting married began to swirl.

It was reported that Leigh-Anne and her longtime beau, Andre Gray, were tying the knot while on holiday in Jamaica. And since then we’ve been on high alert, obsessively refreshing her IG for a glimpse of a white gown, or even a peek at the place cards.

But while we’ve got plenty of stunning holiday photos, nothing about their wedding yet!

Well until now that is, as Leigh-Anne seems to have noticed the fans’ excitement and decided to have the last laugh.

Imagine the excitement when a photo of Leigh-Anne dazzling in a white dress popped up on IG.

Oh we’ve been waiting for this one!

The first wedding pictures, confirmed by the caption, as she wrote; “Just Marri… kidding 🤣”

Ohhh…she got us, but while it might have just been a joke, it is the first time Leigh-Anne has addressed the wedding rumours!

And even though Lee was poking fun, fans still absolutely loved her scheme. Comparing her to the “You just got Krissed” meme, where someone creates an out there celeb story, following it up by a video of Kris Jenner letting them know they’ve been fooled. 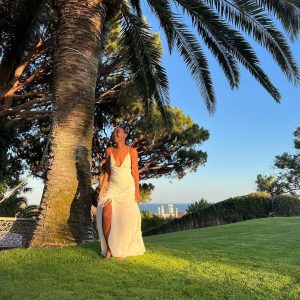 Claiming Leigh-Anne is the new “You got Krissed”, fans wrote:

“we just got krissed by leigh.”

But even though Leigh-Anne was poking fun at the wedding rumours, fans actually think this might have just been a diversion.

With one writing, “Girlieeee we all know you’re having the most extravagant wedding!!!”

So it seems we’re back on wedding watch!