Trending 14th May 2022 by Slaine McKenna

Okay we're going to need an explanation on this one 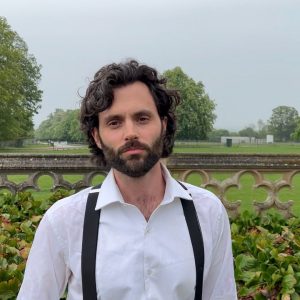 Ever since season three of You landed on Netflix back in October, we’ve all been desperate for more. And we might have to wait another wee while before the fourth series is released. But until then the show’s newest star Lukas Gage has been sharing some BTS details to keep fans satisfied.

But he shared one detail that has us more worried than content. Speaking to E!, the actor revealed that his co-star Penn Badgley is very similar to his on-screen character Joe.

Joe as in the stalker/murderer?…ummm.

Lukas explained his reasoning and there’s no need to worry, it turns out Penn and Joe are just both bookworms. Explaining a gift Penn sent him reminded him of Joe. As he shared, “Last night he sent me a book on Google in the middle of the night,”

Although he admitted the surprise gift did send his imagination wild. Saying, “And I get why everyone’s in love with him. Then I was like, am I Love? Am I Beck? Am I about to just get—am I about to get murdered? Put me in the cage Penn Badgley! Let’s do it.”

But surprise gifting aside, Penn and Joe seem very different, and Lukas couldn’t help but praise his co-star saying, “Penn is the most thoughtful, kind, amazing lead of the show.”

Joining the cast alongside them, is Ed Speleers, of Downton Abbey fame. Ed will portray Rhys, a successful author who is now stepping into politics.

Another big change for the show this season is location.

Another clue was in the show’s IG bio. It says, ” NY LA  ML  FR ??” With the first season taking place in New York, the second in Los Angeles, the third in Madre Linda, and the final scene of the third in France. So it would add up that London could be Joe’s next stop.

So it seems like Joe will be saying “ello you” next season.