We need a backstory!

Ryan Reynolds is a man of many talents. Obviously, we all know about his acting career, but he is also an entrepreneur and football club owner. However, it’s his latest venture that’s grabbed all the attention.

In case you missed it, Ryan has ventured into advertising and has been creating campaigns for different companies. You might remember his Match.com ad from last year, which featured a girl named 2020 falling in love with the devil while Taylor Swift’s new version of Love Story played in the background.

But it’s his new ad that’s got everyone buzzing. The ad is for Peloton, an exercise bike company, and features Chris North, AKA, Mr Big from Sex and the City.

So in the SATC reboot And Just Like That, Big dies from a heart attack while exercising on a Peloton bike. Fans were not happy about this and apparently took it out on the exercise bike company as their shares fell by 5.4%.

Never underestimate the power of a scorned fan.

So the fandoms up in arms, stock prices are falling. Who could possibly fix things? Well, it turns out Ryan was just the man.

He created an ad for Peloton, in which Chris is sitting with Peloton trainer Jess King, who played an exercise instructor on the show. Chris suggests taking another “ride”, gesturing to some Peloton bikes as they laugh.

After that, an extremely fast voiceover says, “and just like that, the world was reminded that regular cycling stimulates and improves your heart, lungs and circulation, reducing the risk of cardiovascular disease. Cycling strengthens your heart, muscles, lowers resting pulse and reduces blood fat levels. He’s alive.”

Leave it to Ryan to resurrect Mr Big.

The ad definitely worked as Peloton shares jumped up 4.7% after it, and fans seemed to love it. Hands down, the ad’s biggest fan, though, has to be Ryan’s wife, Blake Lively. 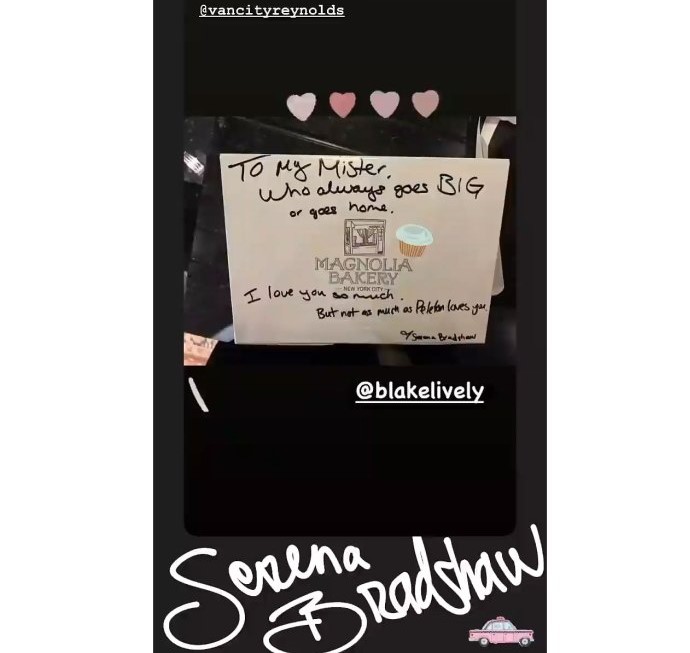 Blake got Ryan a lovely card to celebrate his work, and on it, she wrote, “To my Mister, who always goes BIG or goes home. I love you so much. But not as much as Peloton loves you,”

She signed the card “Serena Bradshaw”, a reference to Carrie Bradshaw, of course, and Serena Van Der Woodsen, Blake’s character from Gossip Girl, a show that was considered SATC for a younger crowd.