Jade Carpenter chats to the stars of Disney's Beauty And The Beast!

If you picked up this month’s issue of STELLAR, you’ll have read all about my magical trip to London for the West End premiere of Beauty And The Beast.

And if you’ve yet to read it pick it up in stores now for the full back story of how I got chatting to two of the stars of the West End show, and all the details about my exclusive trip.

After seeing the show, I was lucky enough to sit down with two of the cast members Sam Bailey (Mrs Potts) and Nigel Richards (Cogsworth) upstairs in the Palladium, surrounded by a flower sculpture of Belle and The Beast as well as framed pictures of shows past. It felt very surreal as a theatre lover and I was lapping it up.

First I had the pleasure of meeting former X-Factor winner Sam Bailey, as a big fan of the TV talent show at the time I was only delighted to see her in person. 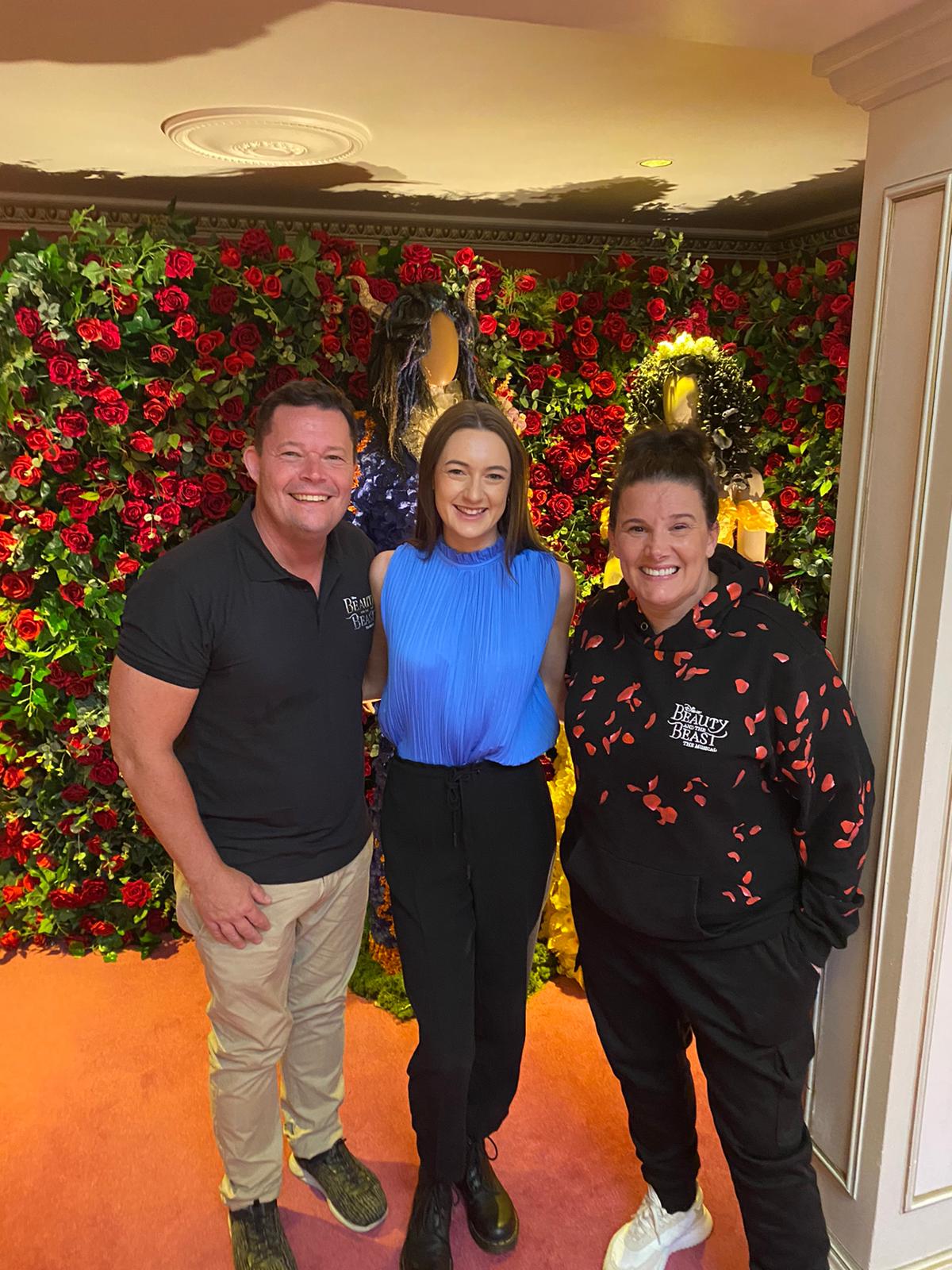 Sam sported a Beauty And The Beast hoodie, a welcome comfortable change from her costume the night before I’m sure. The singer plays the role of Mrs Potts in the show, meaning she has to perform inside a “thick”, “heavy” teapot costume – but more on that to come…

Since we know Sam as the X-Factor winner, I had to ask, was musical theatre in her sights all along?

“I wanted to be in musical theatre and performing from the age of probably about 14/15 but it never quite landed that way. And then when I left school, I was just singing I wasn’t doing any sort of acting but it’s something that I’ve always wanted to give a go, but I never had the training in it really. And here I am 30 years later! “she said.

This show is Sam’s West End Debut. Explaining what that means to her she said, “Press night last night has been a long time coming, I did a show here about four years ago with Michael Bolton, I did his 50th anniversary with the BBC which was great. But then in 1999 I did a show here, so whilst I was singing [the show’s famous song, Beauty And The Beast] last night, I kind of just for a split second was like ‘Oh my gosh, this is it, I’ve done it, I’ve done what I wanted to do [since] 1999 when I first got on this stage in the West End…and it resonated.

“At the same time, I was drawn straight to the story of these two beautiful people that are gradually falling in love. And you have to really concentrate to get that. The amount of emotion that was going through me, I was in the story, right there and then. I could feel this tear coming down my cheek, and my bottom lip was going and I thought, ‘I really don’t want to ugly cry whilst I’m singing this song’, so I was really trying to pull it back and hold it together, and I feel like it worked. I kind of do that every night anyway, there’s always a little bit of me in there. I think of my own kids and my own daughter you know?

“I feel like Mrs Potts is a little bit of me, she’s a mom, she’s very caring and she’s quite a warm character and I feel like I’ve got all of those qualities. So, it was kind of inevitable that I would kind of just mould myself into that character and here I am. I just feel like she’s me, there’s a lot of me in there, she’s a pleasure to play.”

Sam relates to the character so much that she made Mrs Potts a part of her, permanently…

“I got a tattoo [of Mrs Potts] on my upper leg because I think this has been the making of me. I’ve done shows before this, I’ve done Chicago, I’ve done Fat Friends, I’ve done 42nd street. But I feel like this one’s the one that has really clutched on my heartstrings a little bit and I kind of don’t want it to end. Working for Disney has been fantastic and they’ve been great, they are such an inclusive machine.

“My son’s autistic so they have a lot of things to do with relax performances, and it’s for everyone this show, which is why I like being in it. Such a wonderful show to be in.“

As for the costume, well, I can tell you that it looks absolutely brilliant on stage to the audience, as for what it’s like on the inside? Sam explained, “It’s like wearing a carpet. That’s the only way I can describe it. It’s thick, it’s heavy and I can’t give away the Disney magic of course, but we have a wonderful physio on this show who works wonders with us to make sure that we’re always safe and that we’re not doing any damages to our body. Mrs Potts has to keep her arm up in the air, she has to walk around on stage pushing the trolley with one hand. It’s a little bit hard sometimes but that’s show business baby. SHOWBIZ!”

Sam will, of course be playing Mrs Potts on selected dates while the show is in Dublin, so I had to ask if there is anything she’s looking forward to doing while in town.

“I did the Bord Gais with Chicago. What an amazing theatre! [It’s] so wonderful, and so big and clean. I remember going to the stage door and they had a fresh supermarket at the back. That place is amazing, and I love the accent, I love the people in Ireland. I’ve had really good followings from people in Ireland. I’m really looking forward to going there, it’s a stunning place. Keep me away from the shops I’m not allowed to go shopping.” 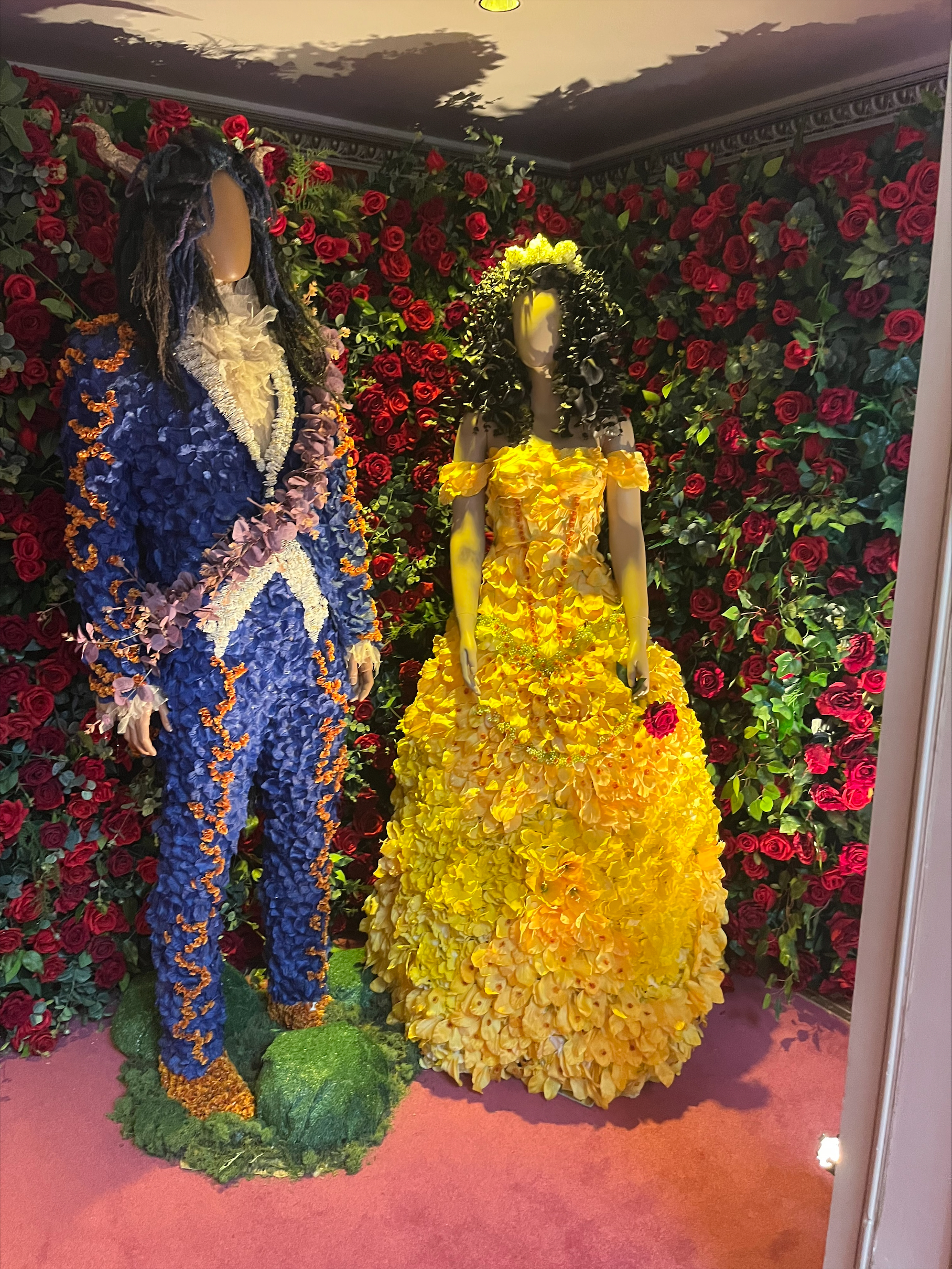 Nigel Richards is a West End star with over 30 years’ experience and a very impressive resumé. His current role is that of Cogsworth in Beauty And The Beast. Cogsworth likes to think of himself as ‘Head of the household’ in the Beast’s castle. And Nigel spoke to me about the joy of playing such an iconic character, while adding his own twist.

“Normally it’s not as comic, so people have been noticing Cogsworth a bit more this time because we’ve definitely gone for [him] being as funny as Lumiere, who normally gets the jokes…”

Nigel admitted his first port of call when getting the role wasn’t to watch the original film, as many might think, “I decided not to [watch the film] and just let my memories of what I thought Cogsworth was [inspire me]…I think I did Cogsworth in such a different way because I didn’t refer to the cartoon, so he’s not as starchy.

“It’s great playing opposites because he’s kind and he’s ruthless and he’s fragile and yet he’s self-important. They are the gift to the actor.”

When you think of Cogsworth, you can’t help but think of his right-hand man Lumiere, and the show highlights their friendship in many ways, and the ‘bromance’ between the actors who play the parts is felt both on stage and off.

Nigel explained, “It’s all about status with me and Lumiere [played by Gavin Lee] and do you know what? We’ve never done it the same way twice. Me and [Gavin Lee] have been given kind of free reign, we don’t change the script but it’s different every night.

“Gavin is twice Tony nominated and we’ve known each other since we were in our twenties and so it’s great to be finally working with him and we play, and I think an audience gets that we’re discovering it in the moment and it’s very exciting.

“It’s such a dream and I never thought I’d be in a dance musical because I don’t dance, and of course Gavin has made his career out of dance musicals.

“He has four feet in SpongeBob the musical and he learned how to tap dance with the two false feet so that shows how brilliant he is. And we’ve just become such great mates.”

Since the pair are actually friends off stage, Nigel already has plans for his trip to Ireland with his co-star, “On a Monday when on tour we’ll always go out to a national trust property. So, I’m taking him to New Grange when we’re in Ireland [and] the Powerscourt waterfall, I’ve been in Dublin a lot and I know where all the sweet spots are.”

Since the show itself is known for its larger-than-life production and costumes, Nigel’s clock outfit might just be the largest of them all. He shared how he feels about performing in the Cogsworth suit, “It’s incredibly hot…I’m running around in a giant box with a swinging pendulum…But it’s so joyous and the cast, we know we’re in something special.”

Beauty And The Beast is truly a “Tale as old as time” (I had to), but what is it that keeps the story so fresh after all these years?

“Tom Schumacher, who is the head of Disney Theatrical said now it has become a parable about lockdown and people coming out of lockdown, and the only way to be better because of what happened with Covid is to live with love. And that’s the message, that we can be freed by love,” Nigel said.

He continued, “It’s a gorgeous thing to be in because children love it and it’s very pro-reading, and it’s the woman who is changing the man’s attitude.

“Sam Bailey’s daughter wears glasses and she went to the head of Disney and said, ‘my daughter doesn’t think she can be a Disney princess because she wears glasses to read, is there any chance that we could have Belle reading with a pair of glasses?’ and we have two scenes where she picks up the glasses so that little girls [who may not see themselves as a Disney princess] can now see themselves up on stage.”

“I think we exceed the expectations of someone who thinks they are just going to see the cartoon on stage.”

How beautiful is their passion for the show? If you can’t wait to get your hands on Tickets, make sure you get booking as Beauty And The Beast comes to The Bord Gais Energy Theatre from the 24th November 2022 until 8th January 2023. Tickets are available here!