The ring everyone from Ariana Grande to Megan Fox has been rocking! 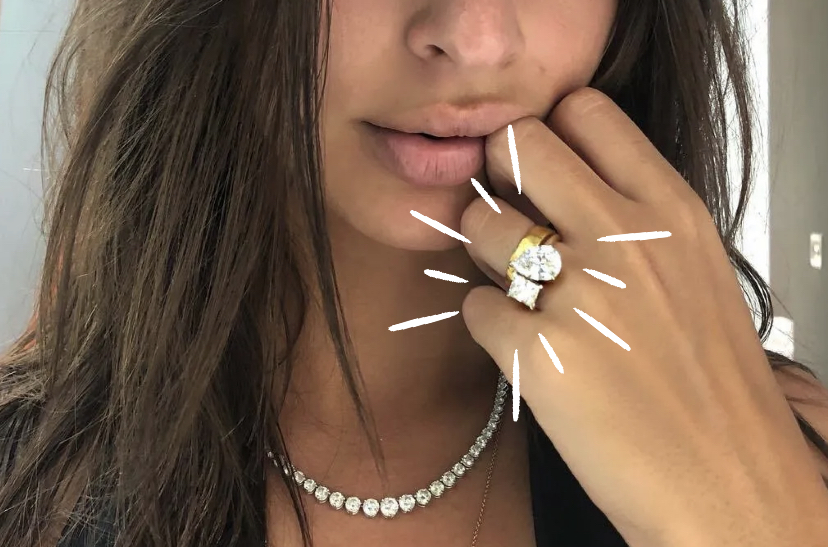 Toi et Moi translates to you and me in English and is the “it” ring style right now. While it might not be on the Leaving Cert French course, it’s well worth learning about. It is characterised by two different gemstones placed together in harmony to symbolise a union.

The style is traditionally romantic and has historically represented relationships and partnerships. So naturally, it’s a popular choice of engagement ring. The style allows for both partners to be represented in the jewels. Some even choose for both birthstones to be used, making it a very personal piece.

The nature of the style means the rings are highly customisable, and each person can really create something unique. While the style isn’t new, it’s the latest and greatest trend that all the celebs are wearing. So, if you’re looking for some inspo, there are plenty of high profile stars to give you some ideas. 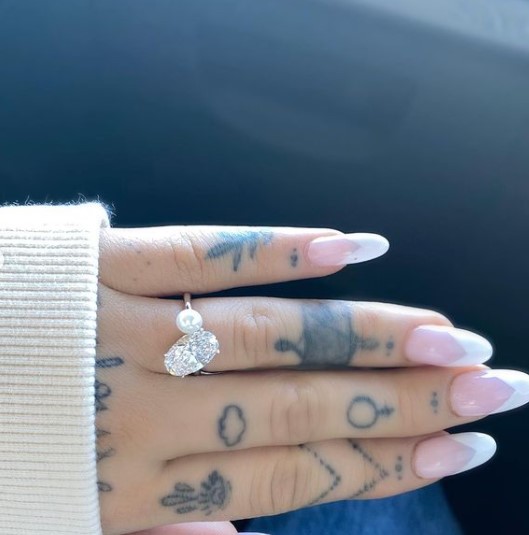 Ariana shocked everyone with her surprise engagement in December 2020, but it was the ring that gained the most attention. Ari’s beau Dalton chose a Toi et Moi style ring to pop the question. He went with an oval-shaped diamond set at an angle paired with a pearl on top of a slim platinum band.

The diamond is obviously a traditional engagement stone, but the pearl had a lovely meaning for Ari. After her grandfather’s death, Ariana’s nonna had one of her grandpa’s pearl-studded tie pins made into a ring for her.

Ari shared on Twitter, saying, “Nonna had a ring made for me with the pearl from grandpa’s tie pin. She says he told her in a dream it’d protect me.” Ever since, Ariana has held pearls in high regard. Awww, Dalton definitely made the right choice.

Emrata is the ultimate it-girl and an absolute trendsetter. So it comes as no surprise that she was rocking a Toi et Moi ring before their massive rise in popularity. When Sebastian Bear-Mcclard proposed in 2018, he didn’t actually have a ring, but after the ceremony, he offered up a gigantic square princess-cut diamond set beside a huge pear-shaped diamond on a thick gold band.

Emily and Sebastian actually designed the ring together, although they haven’t shared the meaning behind it. While the blinged up ring is obviously stunning, Emily’s first ring, which was a paper clip Seb had moulded in a band, is pretty adorable as well.

Who knows, maybe paper clip rings will be the next big trend!

Another gal who was ahead of the trend, was none other than Solange Knowles. When she and Alan Ferguson exchanged vows in 2014, they also exchanged rings. And Solange was given a stunning gold band featuring two square-cut stones adjacent to each other. For the stones, they went with a diamond, and an emerald, perfect for the art deco inspired ring.

Unfortunately, tragedy struck, and the ring was lost during the 2016 Mardi Gras in New Orleans. During Mardi Gras, it is tradition to throw beaded necklaces to crowds below, but while tossing out necklaces, Solange’s ring slipped off and wasn’t found.

When Megan Fox and Machine Gun Kelly got engaged earlier this month, he chose a truly unique Toi et Moi ring. As MGK wrote on Insta: “ I know tradition is one ring, but i designed it with Stephen Webster to be two: the emerald (her birth stone) and the diamond (my birth stone) set on two magnetic bands of thorns that draw together as two halves of the same soul forming the obscure heart that is our love.”

While it certainly is thoughtful and personal to have both of their birthstones representing them on the band, it caused a little bit of controversy due to the thorns. MGK revealed to vogue, “The bands are actually thorns. So if she tries to take it off, it hurts… Love is pain!” 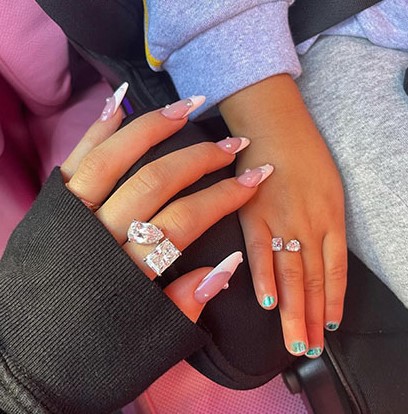 No you didn’t miss something. Kylie isn’t engaged but she is the proud owner of a Toi et Moi ring symbolising an important relationship. But instead of a beau Kylie shares hers with daughter Stormi. After no relationship is stronger than a mother daughter bond.

Kylie and Stormi were gifted the rings by Travis Scott, and many assume they were a pregnancy present as Kylie had just announced she was expecting.