How Far We’ve Come: Looking Back On Some Of The Biggest Moments In Irish Women’s History (So Far)

From getting the vote to repealing the 8th. 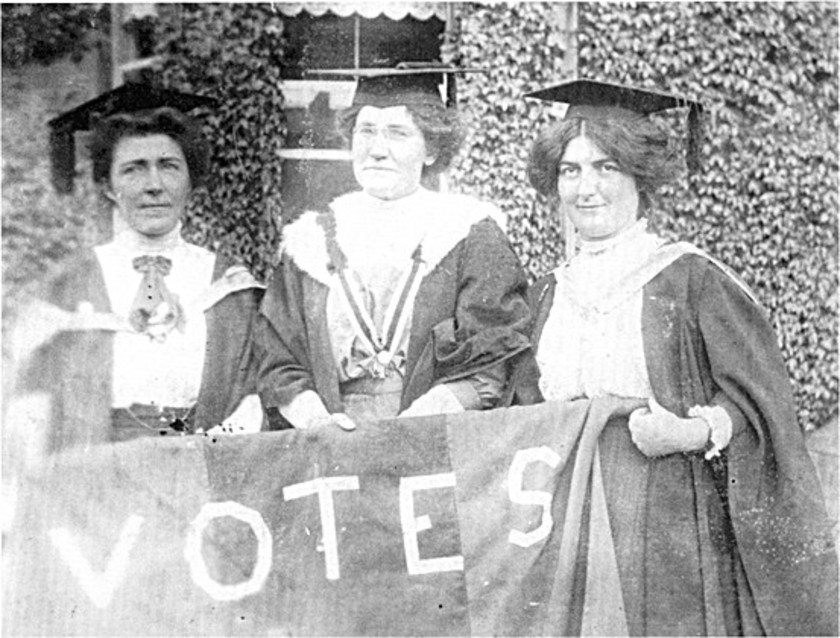 Image via the Women’s Museum of Ireland

This year marks 100 years since Irish women (over 30, who had property rights or a university education) got the vote. It came about after 15 years of suffragette agitation in Ireland – led by women like Hanna Sheehy-Skeffington, they smashed windows, got arrested, and went on hunger strike to get their voices heard.

Younger women finally got a look in in 1922, when the Constitution of the Irish Free State was drawn up. It said that all Irish citizens aged 21 and over could vote, “without distinction of sex”. Gerrup!

It sounds almost made up now, but for decades, most Irish women were required to leave their jobs after they got married. The marriage bar was first introduced in the early 1930s, and reflected Article 41.2.1 of the Constitution, which recognises Irish women’s “life within the home”. It says that mothers will not be “obliged by economic necessity to engage in labour to the neglect of their duties in the home”. (That article is still there, BTW. Maybe it should be the next thing on our to do list?)

Things started to change in the 1950s – Co Clare teacher Maureen Cronin defied the ban by continuing to work for a whole year without pay and, in 1958, it was lifted for school teachers. Fifteen years later, it was scrapped completely. Now, our careers are for the most part in our own hands (even if we’re not quite earning the same amount as the men yet).

Image via the Little Museum of Dublin

Drawing from Catholic teachings, the Irish Free State government made the import and sale of contraception illegal in 1935… but many simply headed over the border to Northern Ireland
to stock up. A young senator named Mary Robinson attempted to introduce a bill to liberalise the laws in 1971, but it wasn’t even allowed a reading. That same year, a group known as the Irish Women’s Liberation Front travelled up to Belfast on what became known as the ‘Contraceptive Train’ to buy condoms and bring them back over the border.

Author Rosita Sweetman was a founding member of the IWLF, and recalls that the reaction to their marches and stunts could get pretty vicious. “Back in the early 70s, everyone seemed to be politically involved. ere were marches in Dublin for housing, against the Vietnam war, for black rights in America. Initially there were just 12 of us, but almost everyone involved was working in some way in the media, so what we were doing got out very quickly.”

Screengrab from the RTE Archives

Rosita didn’t end up boarding the Contraceptive Train in the end:

It was my 23rd birthday that morning and I stayed in bed with my lover. Because he was English, he had loads of contraceptives. Nell McCafferty always gives out to me about it, ‘You stepped out of history Rosita!’ But I was there when they all came back – we were very scared that people would be arrested and jailed.

The condom-smugglers were let pass through without incident, and in 1978, a bill was introduced allowing the sale of contraceptives with a prescription from a doctor. It wasn’t until 1992 that the ban was completely relaxed and we were all free to have as much safe sex as our hearts desired. 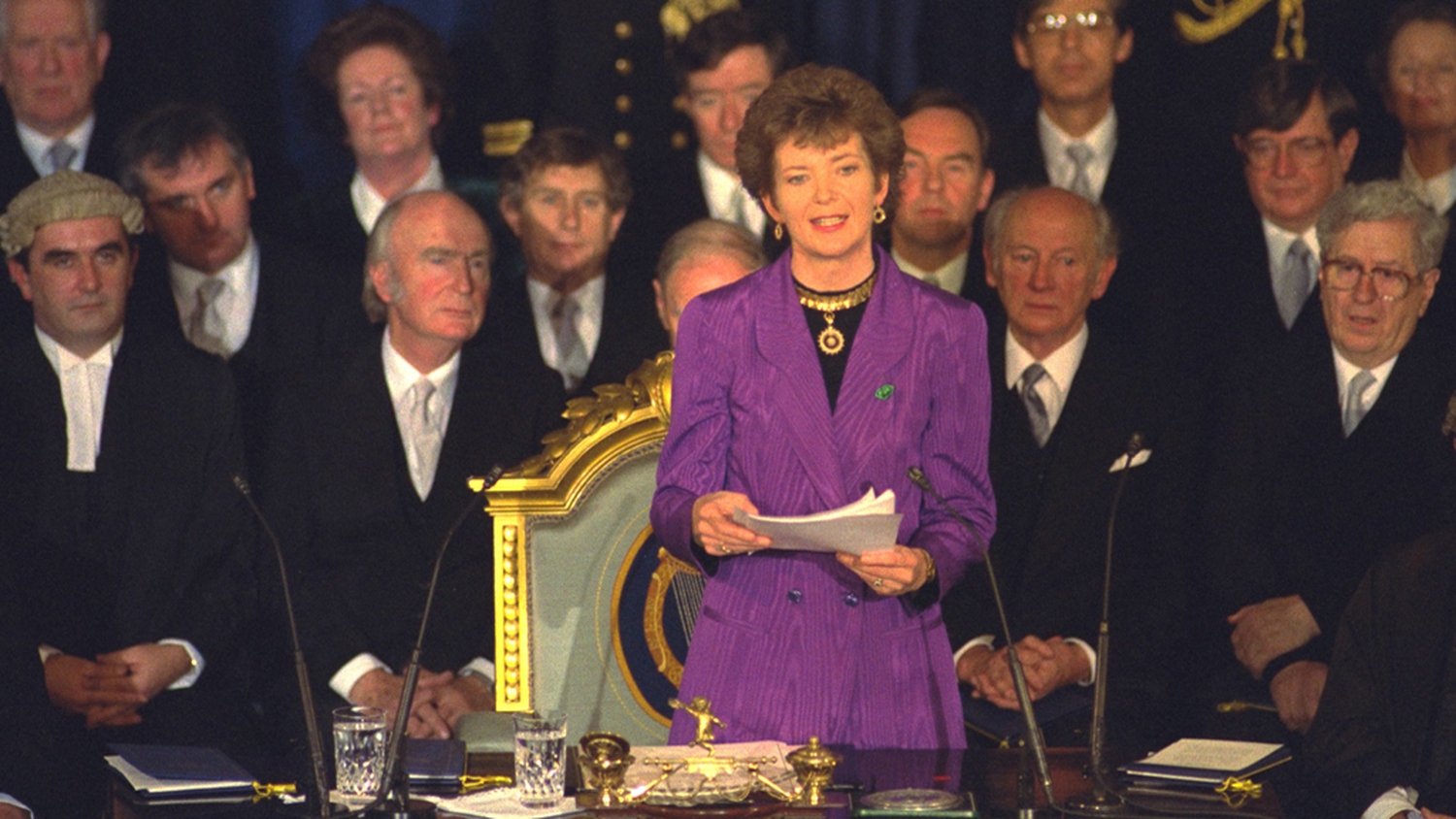 In November 1990, Mary Robinson made history as Ireland’s first female President – the very same Robinson who campaigned hard for the legalisation of contraception. Her victory speech included a special shout out to Mná na hEireann, “who instead of rocking the cradle, rocked the system”. Iconic!

Ciairín de Buis was 17 years old, too young to vote but inspired to go out and canvass. “I heard her speaking about the role of President as she envisaged it, and how she wanted to make it more relevant to Irish people,” she says now. “Kids could see that a woman could be President, which would have been unthinkable for other generations.”

Ciarín is now the CEO of Women For Election, an organisation that encourages women to take a more active role in politics. She says Robinson’s election was a big influence in the direction of her career: “I just took it as a given that women had an active role in politics, and that it was important that they did. She made me think that.”

Just over 20 years ago divorce was illegal in Ireland. By the time a referendum on the issue came about in 1995, it was the only European country in which this was so. Taoiseach John Bruton advocated for a Yes vote, the referendum passed by a tiny margin
of about 0.5%, and the sky fell in. LOL, JK. We survived.

Two years since we said yes to our brothers and sisters #marref #yesequality pic.twitter.com/R9KMkupL2p

After another hard-fought battle, Irish women won the right to marry whomever they choose in May 2015. The No side’s campaign was based on the institution of marriage being between a man and a woman, but thanks to lots of mobilised young men and women, the vote passed by a margin of 63%.

1983 – now: The fight for reproductive rights

Abortion was always illegal in Ireland, but in 1983 the 8th Amendment was voted into the Irish Constitution, equating the life of a pregnant woman with that of an embryo or foetus. Until 1992, even sharing information about abortion was illegal, something Labour Senator Ivana Bacik dealt with first-hand.

The time for painting over our problems and exporting our women has come to an end. #RepealThe8th

In 1989, when Bacik was an officer of the Students’ Union at Trinity College Dublin, she and three other students were taken to court by the group SPUC (Society for the Protection of the Unborn Child) for providing information about abortion clinics in the UK. She remembers Mary Robinson (hi again, Mary) stepping in to defend them and bringing the case to the European Court
of Justice, where it went on for many years.

We had large protests of students down at the courts, we had the Gardaí coming in trying to serve a notice on us to prosecute us for conspiracy to corrupt public morals, and all through this we had desperate women ringing up from all around Ireland every day looking for a number of a clinic, because pre-internet, there was no other way of accessing information. Women’s magazines were being censored when they came into Ireland.

“We understood we would be going to prison. Mary told us to pack the toothbrushes,” she says.

BREAKING NEWS: In a groundbreaking and historic win for women and reproductive rights, Ireland has voted to repeal its constitutional ban on abortion. #RepealedThe8th #8thref #Ireland

Meanwhile, in 1992, the courts decided that a teenage victim of rape who was threatening to end her own life (Miss X) should be allowed to travel to the UK for an abortion. “As a result of the X case, public opinion began to shift as people saw the serious consequences of the 8th,” says Bacik. Later that year, a referendum passed allowing for freedom of information and travel.

The next two decades saw several more scandals pressure the government to hold a referendum
to repeal the 8th, and in May, 66.4% of the Irish population voted to remove it from the Constitution. Over the next few months, legislation will hopefully be drafted to make abortion legal on request up to 12 weeks – and all this happened because Irish women would not stop campaigning. It’s clear to see we’re pretty good at getting shit done, to say the least. Long may it continue.