You knowww what you did! It has been eight years since The Hills gang have graced our screens – yes, eight years. While we can all admit that hearing Lauren will not be joining the cast when it returns in 2019 broke our hearts just a little more than it should have, we are still very ready for it to come back.

So, in preparation for the reunion, we are revisiting the show’s most iconic moments – the good, the bad, and the very very good.

Lest we forget that perfect tear. The emotional moment came about during a conversation between Lauren and Audrina, when they discussed the possibility of Audrina moving out of their home and the drifting relationship between the two. We only wish our sobs were this well executed. Never will we ever be able to get the image of Heidi Montag crying to her mam because she slagged her new face out of our heads. At the start of season six Heidi flew home to her family to reveal the results of her ten elective plastic surgeries. Having laid eyes on her, Heidi’s mam said “I felt that you were much more beautiful before and I’m hoping that some of this will fade away and go away.” Ouch. Not exactly the kind of thing you want to hear from your mam, but it made for brilliant entertainment all the same.

Lauren points out that homeboy wore combat boots to the beach

We all need a friend like Lauren. She will comfort you when a boy breaks your heart, remind you of your worth and point out that your love interest did indeed wear combat boots to the beach, and you know you don’t want to call that your boyfriend.

That time Spencer brought his crystals to the club

However many years later and this still does not make sense to me. The Hills most famously documents the rise and fall of the wonder that is Spencer Pratt. I mean I get the whole inner peace thing, but bringing healing crystals to a night club and explaining the purpose of them to girls in bodycon mini skirts? Not so much.

The end of Lauren and Heidi 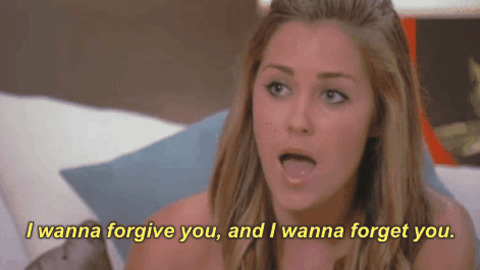 On the topic of Speidi, Lauren once again supplied us with reality TV gold in the scene where she officially ends her friendship with Heidi. Throughout the clip, Lauren dropped a number of #inspirationalquotes that we like to live by daily. Our favourites include “Sometimes when you love people, you wanna believe they’re good”, “Sometimes whether you did something or you did nothing, it’s just as bad” and of course our all time favourite, “So, I want to forgive you (dramatic pause) and I want to forget you”. Ohh the feels.

The girl who didn’t go to Paris

If there’s anything Carrie Bradshaw taught us, it’s that the chance to go to Paris comes along at a pivotal moment in one’s life. Clearly Lauren did not learn from this, and turns down the chance to spend a summer in Paris interning. Instead Lauren spent her summer in a beach house with boyfriend Jason, which didn’t exactly work out in the end. However, thanks to Lauren’s mistake we have all learned that we do not ever want to be known as the girl who didn’t go to Paris. Take those opportunities, follow yo dreams girl.

No way are we ever getting over that, nope, never. In the ending scene of The Hills finale back in 2010, following a very emosh montage of Lo, Kristin and Audrina, the infamous Hollywood hills background disappeared from behind Brody and revealed a studio. My 15-year-old ass stage-gasped as this happened and still to this day, I am unsure exactly where real life ends and television begins. I want answers.