Ariana Grande is way ahead of the rumour mill.

Ariana Grande has spilled her secret for her iconic eyeliner look in a video for Selfridges promoting her beauty brand R.E.M. Beauty. But it wasn’t the eye look that caught our attention, it was the disclaimer she made about her marriage while filming.

The songstress knew exactly what the internet would say when they didn’t spot her ring in her latest makeup video. While demonstrating her technique Ariana tried out a questionable English accent, which she admitted she was “butchering” and disclaimed the missing wedding ring by saying, “I’m just not wearing my ring, it’s getting cleaned I’m not getting a divorce, so before you start, don’t.” 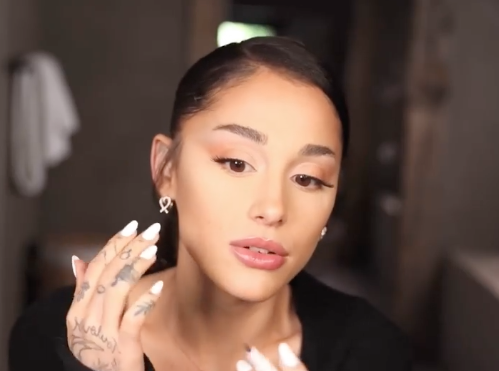 She’s been in the spotlight long enough to know that even the smallest thing can cause a stir online, so the witty jab at the rumour mill was both funny and necessary before any speculation started. Plus, it gave fans snippet of her goofy side we don’t often see when she’s belting her powerhouse tunes, the accent is pretty gas tbf.

Ariana secretly married Dalton Gomez in 2021 after getting engaged in December of 2020. The pop princess and the estate agent keep their relationship pretty low key and have been married for over a year now.

The singer and actress has previously had some very public relationships with the late Mac Miller, Big Sean and Pete Davidson who she was engaged to for five months before a very publicised split.

The world got the first glimpse of Ariana and Dalton in  the music video for Stuck With You by Ariana and Justin Bieber, which they filmed separately in lockdown with their significant others.

The pair seem so cute together and we’re delighted to hear there’s no trouble in paradise!