And it's not the first time the 38-year-old's DMs have been exposed.

Despite seeming like he gave ex Kourtney Kardashian and her new beau Travis Barker his “blessing” on KUWTK’s season reunion a mere few months ago, it looks as though Scott Disick has changed his tune.

Or more than likely, did so through gritted teeth if this new screenshot is to be believed.

Shared by Kourtney’s ex and French model Younes Bendjima, who the star dated for two years following her split from Scott Disick, it looks as though Scott reached out to the 28-year-old in a hope to build some sort of friendship or exchange nasty comment about their shared ex.

In the DMs, Scott appears to share a photo from Kourtney’s Italian getaway with the caption:

“Yo is this chick ok!??? Broo like what is this. In the middle of Italy,” alongside a snap of his ex kissing the Blink 182 drummer. 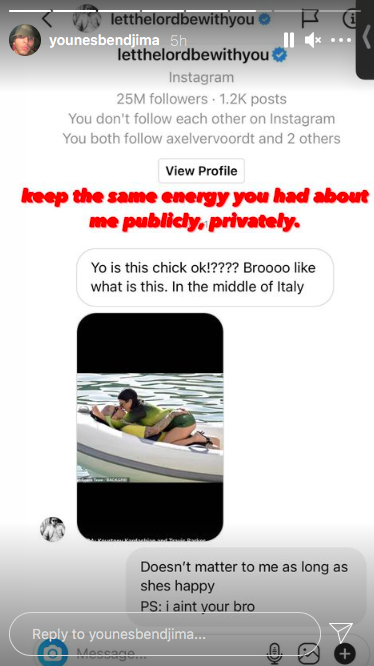 In response, and publicly shared by Younes, it looks as though the model has zero tolerance for Scott, sharing the message and also admitting that he’s not his “bro”.

Might this date back to how Younes felt treated by Scott when he was dating the mother of three? Potentially, as he adds:

“Keep the same energy you had about me publicly, privately.” 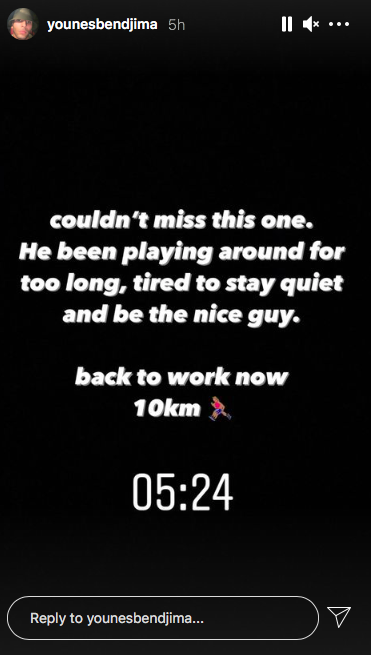 During episodes of KUWTK, it was very clear how Scott felt about Younes admitting that he found it very hard to see Kourtney with anyone else despite being in a relationship himself for three years with Sofia Richie.

During the reunion and season finale of KUWTK in early summer, Scott also added that he wanted to “kill” anyone linked to Kourtney, adding a cryptic comment about “the last guy”, which were allegedly made in reference to Younes.

“Couldn’t miss this one. He been playing around for too long, tried to stay quiet and be the nice guy,” Younes added as a final note before admitting that he was heading off on a 10K run, ending the conversation there.

Well, there you have it.

As for Kourtney, Scott or Travis, well none of them have reacted to the alleged DM yet, but this isn’t Scott’s first rodeo with leaked messages. Let’s not forget about Megan Barton Hanson’s message when she realised Scott was a – errr – Love Island fan.

Refresh your memory on all of that here.