Forget an Easter egg hunt, this is what we need!

Singer/Songwriter Dermot Kennedy decided to surprise fans with a special treat, revealing unreleased lyrics from his new music on handwritten letters hidden around Brooklyn, for fans to find.

The Dubliner announced the scavenger hunt on his Instagram, saying; “I’m leaving ten cards with unheard lyrics from new music around Brooklyn for the next hour or so. If you grab one you’ll get special rewards from me soon.”

“If you like my music and you grab one of these I promise it’ll be worth your while in the future. Happy searching 😊 X”

As for what exactly those special rewards are, Dermot has a few ideas in mind, promising; “I’m gonna make sure that it’s like a special thing to have and that if you show up with it, at a show in five years, who knows, you’ll like get merch, get tickets.”

“It’ll be like an early mailing list almost. So if you see one of these around, or if you see them near you, do pick it up.” 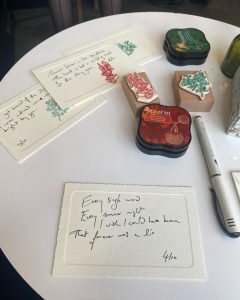 The Better Days singer, did have a few requests for the lucky few who find the letters. Asking; “if you do get one of the cards, just don’t post the flip side of the card because there’s a letter on it. And that’s how I’m going to know if it’s authentic, if you show it to me in the future, if you bring it to a show, anything like that. So keep that side for yourself.”

Dermot also didn’t want any fans taking more than one card, saying; “if two people show up here at the same time, and one of you takes both of them and doesn’t share the other one. I probably don’t like you.”

He set off around Brooklyn on a blue bike, which he called his “steed”, and began cycling around to the hiding spots claiming he felt, “like Willy Wonka.” Keeping fans updated on his journey over his Instagram story.

The first card was hidden in Manhattan Avenue Greenpoint. The second one on Calyer Street. The third in Bushwick Inlet Park. While the fourth was left beside a bookshop called McNally Jackson Books. The fifth and sixth were hidden in a spot that’s very important to Dermot, leaving them outside Mission Sound Studio, which he revealed was his favourite recording studio in the city.

The seventh was left in front of a stunning wall mural. The eighth card was hidden in Willoughby Ave, another spot that was important to Dermot as it’s where he filmed the Lost music video. The ninth was dropped off at Herbert Von King Park. While the tenth was left in Hartleys, a pub where the musician treated himself to a pint of Guinness after the long day.

He told fans to DM him if they find any of the cards or tag him in a picture of it.

Finally Dermot thanked fans for supporting him and taking part in the letter hunt, saying; “Thanks so much for that today. I won’t go on about it, but honestly I struggle with the idea that as you become more ‘successful’, you seem to become more disconnected from the people who support you and actually gave you a career. I hate that, so things like today count for a lot cause they feel real. More to come soon.”